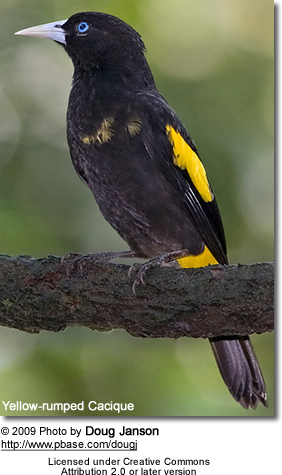 This is Beach Baby Bob once again with some great information about one of my favourite birds – the yellow-rumped cacique bird.

Before I share some of my experiences with this bird, I want to remind you that every Feb. and Mar., my wife and I live in a tree house in Bucerias Mexico, located beside a giant parota tree next to the beach.

It is actually on the roof of the small Mexican hotel called, “Ana Ruth’s”.  The birds love this tree and we love watching and studying their habits.

The cacique bird reminds me of a large starling or small crow, except it’s back side is yellow.  This bird is very busy.

He spends a lot of time rummaging through old dead branches searching for his or her lunch.  He is difficult to photograph because he rarely sits still.

The Yellow-rumped Cacique bird loves to eat bugs and young arthropods like grasshoppers, crickets and katydids.

When its Valentines’s Day, this bird might treat himself to an orb-weaver spider.  The adult bird also eats fruits, seeds, and nectar.

This bird is not a fussy eater for sure.  It also eats winged termites during the wet season.  They feed in groups.  We saw 2 working together today in our giant parota tree while we ate our breakfast.

You probably won’t see them close to the ground when looking for food.  They prefer to be high up in the branches and sometimes hang upside down on leaves while eating.

This is called the “hang Robinson 1986”.  These birds are like private investigators. They scan the tree looking for dead leaves and curled living leaves, which often contain hidden bugs.

The cacique will insert its long, pointed bill into a curled leaf and then proceed to open it with its bill.  If anything falls from the curled leaf, they will chase after it.  This is called the “chase flush” manoeuvre.

They also perform the “hover-search by hovering under a branch with leaves at the tip and investigating for their dinner.

Cacique birds are polygamous meaning that they will mate with more than one female. They also have a hierarchy during the mating process.

The stronger, aggressive dominant males will court up to 40 females at a time during the egg laying period.  The other males hang around waiting but usually they are unsuccessful with the females.

The female goes about her business collecting nest materials while all of the males protect her from predators.

Tocan, monkeys, snakes, and bigger stronger birds of prey all give Cacique birds a hard time.  Cacique birds also live close to wasps, but not too close.

The wasps will keep some of the enemies at bay. Another strategy the cacique bird uses is to live on an island which doesn’t have some of its predators.

It will also again use the caimans to help protect them.

Cacique birds including the yellow-romped, live from Mexico to places in South America.  My wife and I once lived in the Amazon jungle in northern Peru and saw many cacique birds.

They prefer open woodlands and remember they like to be off the jungle floor so they can escape into the air very quickly.

Once upon a time, a young boy who wore a black shirt and yellow pants, came upon an old woman who he thought was a witch.

He said something bad to her so she turned him into a black bird with a yellow bum.  She made him fly the world and say nice things to all.