Whitemargin Stargazer: From the Darkest Parts of the Planet 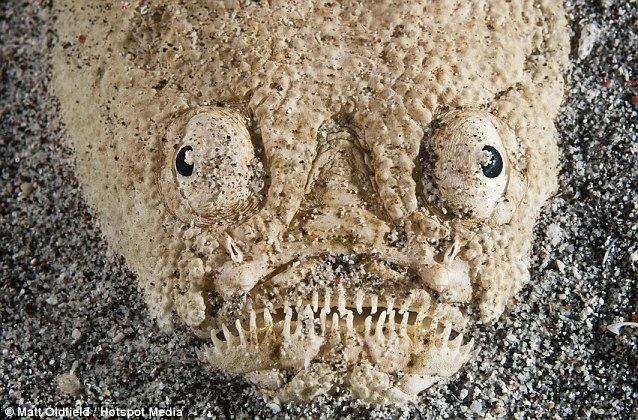 There are some truly terrible specimens living in the darkest parts of the planet. So terrible and strange, in fact, that they could have come from another planet….But it’s very like another planet, under the water, wouldn’t you say?

This particular fish – the whitemargin stargazer – appears to longingly gaze up to the planet from whence it came, with eyes that sit on the top of its head.

There are several fish in the stargazer family, so named for the eyes atop their heads. There are about 50 species in total that live worldwide in saltwater.

Stargazers have large mouths that face upwards, plus an unusually large head. This is how they hunt their prey.

They’re very sneaky; the perfect predator. They get right down, burying themselves in sand so only their eyes see what passes overhead.

There they lie in wait, while unsuspecting fishes swim by. When their prey of choice passes, the stargazer jumps up to grab them.

Some stargazers are even so cunning as to have a worm-like lure in their mouths, which they wiggle to get attention of, again, unsuspecting passing fishes.

This is a fascinating type of fish that we are excited to share with you and the more we read, the greater our curiosity.

It’s neat to learn about all the different fish and animals on planet earth, and how each one has its own unique way of surviving, whether it’s to stand out in ridiculous costume, like a bird from Papau New Guinea, or do what the stargazers do and lie in wait, completely camouflaged until it’s time to STRIKE!

While we will focus on the whitemargin stargazer for the purpose of this article, we will give you a bit of information on the entire family of Uranoscopidae (the scientific term for stargazer).

Stargazers in general are venomous creatures. This means they have a defense mechanism that shoots poison into you if they feel threatened.

Stargazers have two large spines around their opercles. The opercles are the bones that shape the face and protect the gills, used for breathing and eating.

These spines are the venomous bits. In some stargazers, specifically the Astroscopus and Uranoscopus, they aren’t just poisonous but can also give electric shocks.

Of course, fish use sounds for the same reasons we do – to communicate – but with fish the communication is just for territorial behaviour and reproduction.

In all stargazers, there are eight different ways they store and use electricity.

Stargazers are considered a delicacy in some places. When the venom is eaten, it is not poisonous. Sometimes you can find them in fish markets and the electric organ will have been removed.

These fish are so mean that they are also known as the mother-in-law fish. They are pretty mean, camouflaging themselves and then ambushing unsuspecting prey. Where Do They Live?

They are found in the Indo-Pacific locale, including the Red Sea, Indonesia, Fiji, Samoa and Tonga. Always tropical, they live in reef flats and coastal bottoms.

They prefer sandy areas, as burying themselves in sand is the way they hide and then wait for food to swim near them. We’ll get to that later….

You can recognize this fish by the distinctive black or brownish spots. Their colouring is mostly grey, white and brown. The opercle ascends backward (tilts up as it goes toward the back of the fish). You will notice how their first dorsal fin has V spines.

They breathe using a valve inside the lower jaw and the funny little appendages around the base. These appendages are those worm like lures we mentioned earlier.

This feature attracts prey close enough for the stargazer to strike: the prey, being smaller than the stargazer, is attracted to the delicious-looking worm shape and proceeds to go after it.

The stargazer waits patiently, wiggling its lure. Then, when the prey is within a close distance of its mouth, the stargazer leaps up to ambush the prey, grabbing and stunning it with those electric volts from the organ behind its eyes, giving off 50 volts of electricity.

This can have a devastating effect on the prey, stunning them completely (they are much smaller than the stargazer). Then the stargazer gets to eating the little fishes who tried to eat his tongue.

The whitemargin stargazer also eats a diet of small octopi and squid in addition to a variety of small fish.

It is hard to spot this fish for obvious reasons. They are known for their camouflage skills. They are usually buried in the sand or mud with only eyes showing, and the eyes are (utterly terrifying to stare into) very hard to recognize. Little fleshy bumps around their mouths keep sand out while they breathe.

They grow to more than a foot long. Mature or adult stargazers grow to about 13.5 inches in length. And while this doesn’t seem very big to us humans, we must beware their sting. They are considered a threat to humans as wounds can be serious. In fact, their discharge can go up to 50 volts.

For comparison, the electric eel shoots about 860 volts in two milliseconds. And because the shocks don’t last very long, the sting is not likely to be deadly for humans, but extremely painful and serious all the same.

The stargazer will sting not only his prey to provide himself an easy meal, but will also deliver volts of electricity to any predator or environmental threat, as the shock will paralyse the predator, stopping them moving and letting the stargazer get away.

It’s amazing how some animals on this planet Earth are so gloriously beautiful, while others are so terribly hideous that it nearly churns our stomach to look at pictures of them.

They are horrifying. The spots all over them looks like gore. In fact, with their mangled faces like that, they look like a regular fish who was run over and flattened under somebody’s tire.

Those haunting googly eyes will follow you into your dreams.

That mouth – so creepy, so jagged – looks like a wound that was stitched up after an autopsy. The brownish spots resemble the growths we see on tombstones or concrete. Like a lot of time has elapsed.

Either way, the whitefish stargazer looks like a sunken treasure at the bottom of the ocean that has been there for decades or centuries.

This, obviously, is how they are so good at disguising themselves and getting away with it: no one would ever see it coming!

And of course when they bury themselves deep in the sand or mud, the sand or mud goes flying and ends up covering part of the fish’s body, which enables them to further blend in with the environment.

This fish has a number of nicknames including:

That’s about everything you’ll need to know about this fish. Luckily some divers have caught good photos of them, because humans barely recognize them when they are swimming, since they’re so good as disguising themselves.

All in all, the whitemargin stargazer is a very unique looking fish with interesting hunting habits. We feel only a little sheepish for insulting its appearance so much.

The Whitemargin Stargazer made our list of World’s Weirdest-Looking Fish!  Read more!

Next post: We Pick The Best Beaches In Croatia