What Is a Sea Snake? 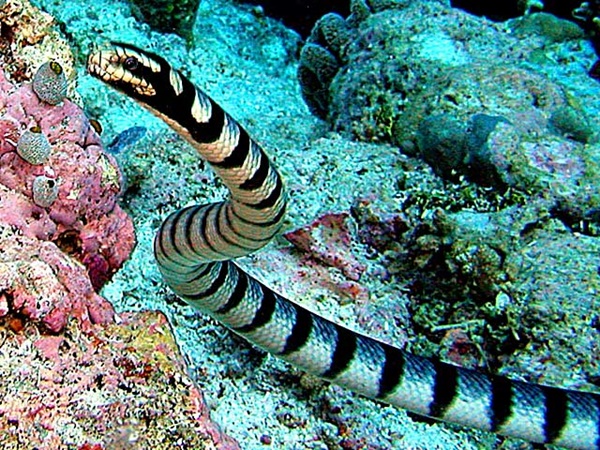 Today we’re going to talk at length about sea snakes.

What is a sea snake?  For starters, the scientific name for a sea snake is “Hydrophiinae”, and these are basically snakes that live underwater for their entire lives, with a few exceptions

Use the following table of contents to navigate this article.

Alright, let’s dive into the depths of knowledge and learn a few things about sea snakes!

Hydrophiinae is a subfamily of venomous snakes of the family Elapidae, that inhabit marine environments for most or all of their life. Most are completely adapted to aquatic life and are unable to move on land.

The only exception is the genus Laticauda, which retains the ancestral characteristics, allowing limited movement on land. They live in warm waters from the Indian Ocean to the Pacific and are closely related to Australian terrestrial venomous snakes.

All have paddle-like tails, and many have a laterally compressed body which makes them look similar to an eel. However, they must regularly surface to breathe because they do not have gills like fish.

They are among the most aquatic of all vertebrates with aerial respiration. Among this group are species with the most powerful venoms of all snakes. Some are very aggressive and bite only when provoked, but others are much more aggressive.

Currently, 17 genera are described in this class of sea snakes, including 62 species.

The majority of hydrophilic species reach adult age between 120 and 150 cm long, and the largest, Hydrophis spiralis, can measure up to 3 m2. They have dorsally located nostrils and small eyes with a round pupil.

The skulls are similar to those of the terrestrial elapids, but the dentition is quite primitive with 18 small teeth and short fangs, with the exception of the Emydocephalus.

As most Hydrophiinae are completely aquatic, they have adapted to their environment in many ways. The most obvious example is their paddle-like tail. It significantly increased their swimming ability.

The bodies of many species are compressed, particularly in pelagic species. This has often resulted in a reduction in the size of ventral scales, which even becomes difficult to distinguish from adjacent scales.

This reduction in ventral scales means that they have become virtually unable to move on land, but since their entire life cycle takes place at sea, they do not need to get out of the water.

The only genus that has retained enlarged ventral scales is the Laticauda, which has only five species.

These snakes are considered the most primitive because they spend much of their time on earth, where their ventral scales grant them the necessary adhesion.

Snakes from this genus are also the only sea snakes with internasal scales, and their nostrils are not located on the back.

As it is easier for the snake tongue to fulfill its olfactory function under water, its movement is short-lived compared to terrestrial snake species. Only the forked ends protrude from the mouth by a notch in the middle of the rostral scale.

The nostrils have valves made of specific spongy tissue to prevent water from entering, and the trachea can be erected where the short nasal passage opens onto the ceiling of the mouth.

This adaptation is vital for an animal that must rise to the surface to breathe, but whose head can be partially immersed in doing so.

The lung has become very wide and extends almost the entire length of the body, although the rear part is supposed to have been developed to facilitate buoyancy rather than gas exchange. The long lung may also be used to store air for dives.

Most species of Hydrophiinae are able to breathe through the top of their skin. This is unusual for reptiles, which have thick, scaly skin, but experiments with a pelagic species Pelamis platurus have shown that they can get about 25% of the needed oxygen in this way, allowing prolonged dives.

Like other terrestrial animals that have adapted to life in a marine environment, sea snakes ingest much more salt than their land relatives through their diet, and when seawater is inadvertently swallowed.

This means that they have had to evolve to benefit from a more effective way of regulating the salt concentration of their blood.

In sea snakes, the posterior sub-lingual glands, located below and around the tongue sheath, have evolved to allow them to expel salt when they actuate their tongue.

The arrangement of scales among sea serpents is very variable. In contrast to terrestrial snake species that have nested scales to protect them from wear, the scales of the most pelagic sea snakes do not overlap. The scales may be smooth, keeled, spiny or granular, the latter often resembling warts.

Aipysurus laevis has photoreceptors in the skin of the tail, which allows him to detect the light and make sure that he is completely hidden, including his tail, inside the coral holes where he lives in the day.

While other species have not been studied, Laevis is probably not unique among sea snakes in this respect.

The Black and Yellow Marine Snake has a particularly large distribution area.

Hydrophiinae lives mainly in the warm tropical waters of the Indian Ocean and the Western Pacific Ocean, with a few species that can be found in Oceania.

The geographical range of a species, the Yellow Sea Serpent and black (Hydrophis platurus), is wider than that of almost all other reptile species (the only exceptions are a few species of sea turtles).

It can be seen from the east coast of Africa, from Djibouti to the north to Cape to the south, across the Indian Ocean, the Pacific, reaching south the north coast of New Zealand to the west coast of America, where it stretches from northern Peru to the south (including the Galapagos Islands) to the Gulf of California to the north.

Isolated specimens were found north to San Clemente in the United States.

Marine snakes are absent from the Atlantic Ocean. It is thought that the Yellow and Black Marine Serpent could live there but that it is the cold currents off Namibia and southwestern South Africa that prevent passage in the eastern South Atlantic, or at 5 ° latitudes along the west coast of South America.

There are also no marine snakes in the Red Sea, and it is thought that this is due to its increased salinity, and there is no danger of some of them arriving in the Mediterranean Sea while crossing the sea. Suez Canal.

Salinity, or rather the lack of it, is also the supposed reason why the Yellow and Black Marine Serpent did not arrive in the Caribbean via the Panama Canal.

In spite of their marine adaptations, most sea snakes prefer shallow waters near land, around islands, and particularly in relatively sheltered waters, such as those near estuaries. They can go up the rivers and have been seen up to 160 km from the sea in some of them.

Others, such as the Yellow and Black Marine Serpent, are pelagic and end up in drift lines, or debris sheets collected by currents and floating on the surface.

Some sea snakes inhabit mangroves and brackish-like habitats, and two species live in freshwater near the coast: Hydrophis semperi in Taal Lake in the Philippines, and Laticauda crockeri in Te Nggano Lake on Rennell in the Solomon Islands.

Are Sea Snakes Dangerous to Humans?

Sea snakes are generally reluctant to bite and are generally considered quiet animals, although there are variations between species and individuals.

Some species, such as the Black and Yellow Marine Snake, which feed simply by swallowing their prey, use their venom only for defense, so they are more likely to bite when provoked.

Others, like the Laticauda, use their venom to immobilize their prey; these snakes are often handled without problem by local fishermen, who untie them and throw them back into the water with their bare hands when these snakes are caught in fishing nets.

On land, they crawl awkwardly, and can become very aggressive, biting savagely anything that moves, even if they are unable to roll up and launch a targeted attack in the manner of terrestrial snakes.

Marine snakes appear to be active day and night. They can be seen on the surface in the morning, and sometimes late in the afternoon, warming up in the sun, and they will dive when disturbed.

They have been reported swimming at depths of more than 90 m, and may remain submerged for a few hours, the duration possibly varying according to temperature and degree of activity.

Marine snakes can be seen in large numbers.

For example, in 1932, a steamboat in the Strait of Malacca, off the coast of Malaysia, yielded the sight of “millions” of Astrotia stokesii, a relative of the black and yellow marine Serpent; these would have formed a line of snakes 3 m wide and 100 km long.

This phenomenon is probably related to reproduction, although it has yet to be proved. Sometimes they swim in groups of several tens, and many dead specimens have been found on beaches after typhoons.

They feed on small fish and sometimes young octopods.

Now, the question on everyone’s mind…

How Do Sea Snakes Reproduce?

With the exception of one genus, all species of hydrophiinae are ovoviviparous.

Ovoviviparous means that there are eggs which the mother carries in her body, and they hatch when the babies are ready to be born. In some species, the young are quite large: up to half the size of the mother. The only exception is the genus Laticauda, whose members are oviparous; the five species lay their eggs on the ground.

The Aipysurus group is monophyletic and constitutes a very divergent lineage.

Can Sea Snakes Live In Captivity?

Hydrophiinae are difficult to keep in captivity. Ditmars (1933) described them as sensitive and nervous under these conditions, and indicate that they generally refuse to eat, preferring to hide in the darkest corner of the tank.

More than 50 years later, Mehrtens (1987) wrote, although they are rarely presented in Western zoos, that certain species were regularly exhibited in Japanese aquariums.

Available food limits the number of species that can be kept in captivity because some have diets that are too specialized.

In addition, some species appear to be intolerant to handling, or even to be removed from the water.

With regard to their captive needs, Laticauda species must be able to escape from the water to a point with a temperature of about 29 ° C, with a submerged shelter.

Species that can be easily bred in captivity include Pelamis platurus which adapts very well and feeds on small fish, including goldfish, and Hydrophis cyanocinctus, which feeds on fish and eels in particular.

However, to prevent snakes from damaging their snouts by swimming in corners, they need to be housed in round or oval tanks, or in rectangular tanks with well-rounded corners.

Are Sea Snakes on The List of Threatened Species?

Most of these sea animals are not on the CITES 6,17 protection lists. Only Laticauda crockeri is a species classified as vulnerable.

Aipysurus fuscus is marked as ‘endangered,’ while Aipysurus foliosquama and Aipysurus apraefrontalis, are classified as critically endangered, in the Red List threatened species of IUCN18.