What Is a Sea Serpent? 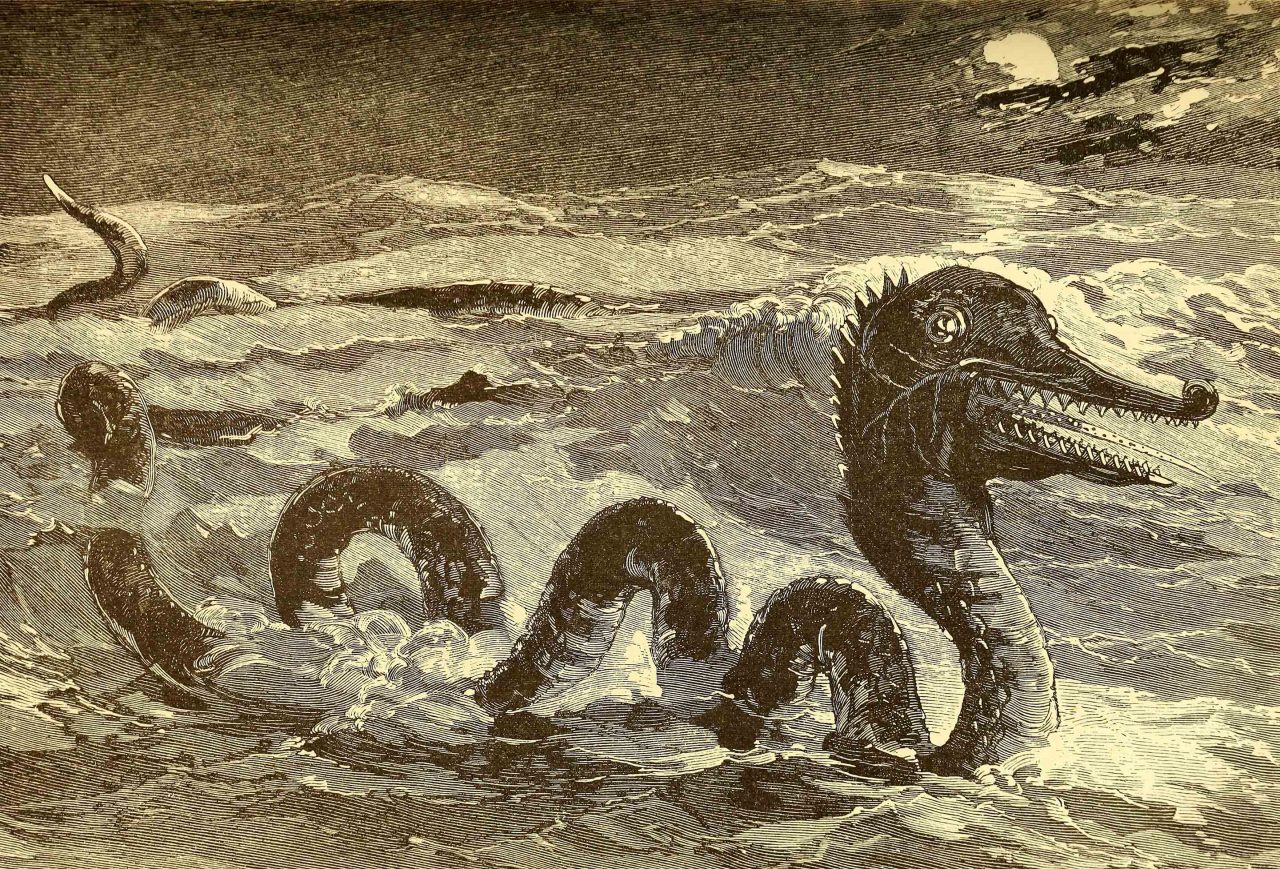 Sea serpents, also referred to as sea monsters, are mythical aquatic monsters closely resembling European dragons, which generally have gigantic dimensions and considered terrifying as well as dangerous, such as Jörmungand and Ouroboros in myths and legends.

Sea serpents are mentioned in the testimonies of marine crews from several eras throughout history, which coincide with the telling of unknown large marine animals living in the icy waters of northern Europe.

These sightings can be explained, in part, because sea serpents were very much alive in the age of the dinosaur, in the form of such aquatic creatures as these monsterous creatures seen in the video below, including the elasmosaurus, and the terrifying “Predator X”.

These ancient creatures haven’t been seen often in today’s world, because they are mostly if not entirely extinct, although some speculate that creatures like the Loch Ness Monster, if actually alive, may be something along the lines of a plesiosaur.

That said, the 100% confirmed existence of most of these animals has never been scientifically proven by today’s science, and so the term “sea serpent” belongs to the field of cryptozoology, which is basically the study of creatures which haven’t been fully proven to exist, like Nessie and Bigfoot.

On the other hand, sea snakes are a very real creature and they do officially exist, and are quite common.

Here is a video showing what a sea snake looks like, not to be confused with a sea serpent or sea monster, although sea snakes can grow to be quite large (hence there is some confusion).

The term sea serpent can and often does designate creatures quite different from each other, one should understand.  From one sea serpent to the next, their appearance can be drastically different.

Because a sea serpent is indeed mainly of mythical origin, this explains how they can be perceived as quite different from one another.

Let’s look at some of the accounts of sea serpents through history, so you can get a better sense of what these curious creatures might be…

In 1539, Olaus Magnus created the Carta Marina (Latin for “marine map”) and introduced the sea serpent idea to the world.

Perhaps the earliest illustration of the sea serpent appears in the Carta Marina, which is a map of northern Europe drawn up in 1539 by the archbishop of Uppsala, Olaus Magnus, detailing nordic locations near Sweden.

Olaus Magnus gave us more details for these legendary monsters in the history of peoples from the north (Historia de gentibus septentrionalibus) in 1555.

He specifies that the sea serpent has a length of about 60 meters, a width of 6 meters, and that this man-eater comes to the deck of the ships to snap up passengers and devour them.

In the same year, two 20-meter-long marine animals with a diameter of 2 to 3 meters are mentioned, they would move vertically, demonstrating their mammalian and non-reptilian nature.

On July 30, 1915, there was a marine crocodile about 20 m long which was apparently seen by a German submarine but, upon closer examination of reports, it seems that it was, to some degree, a hoax.

In October 1969, a submarine crossed paths with a large reptile-headed animal that fled before being filmed.

In April 1977, the Japanese trawler Zuiyo Maru found carcass about 10 meters long, and the photographs evoke a type of plesiosaur, but for the zoologist and cryptozoologist Bernard Heuvelmans, it was in fact a shark in decomposition. As mentioned, sea serpents, of the monster variety, are mainly manifestations of subconscious (or conscious) fears of seamen who fear creatures beneath the waves, and so their appearance does always change according to the wild imagination of one person to the next.

Most sea serpents, according to sightings and reports (real or imagined), would suggest that a sea serpent has dark scaly skin, sharp fangs, and a terrifying face.  They are often considered the stuff of nightmares, but they are all too real to those who have reported them over the centuries.

They would reach up to sixty meters long and six meters wide. Some would have a mane. They would feed on fish, sharks, dolphins, and humans.

Because man has never been fully at ease on the water, due to the fact that men are land animals, and being that the sea is so dark, deep, and full of mysteries, it’s no surprise that sea serpents have been depicted by sailors as frightening indeed.

On top of all of this, in days of yore, seamen who had been at sea for long nights, stretching to weeks and months, were slightly delusional, to say the least, due to exposure to elements, lack of food, claustrophobia, and disease (ever heard of scurvy?) that can strike a person while at sea.

To touch base with reality momentarily, sea serpents are often confused with regular sea snakes.  In fact, it seems to be almost the same term, but with an importance difference in meaning.  A sea snake is just a snake that swims in the sea, while a sea serpent can be a monster as tall as a building.

Here below is a real sea snake, which certainly wouldn’t qualify as a full blown sea monster, but it is a serpent, and it does live in the sea.  This one here resides in the waters around Vietnam.

Where do the stories about sea serpents come from?

To show people that sea monsters aren’t real, cryptozoology places great emphasis on the fact that whales sometimes behave like snakes: they stand up in the air and tap their bodies. In the right light, they can appear terrifying, and can confuse seafaring folk into mistaking them for some giant monster, when in fact that it’s just a huge whale.

Imagine these happy go lucky orcas (in the video below) being seen not in the light of day, but during a storm, and by a person with fever as lightning crackles in the sky above.

A smile from an orca dancing in the sea can seem to a man as a monster come to eat him whole.  And, you can imagine that same whale being 100 meters long if you were only staring into it’s eyes on the bow of a ship, as you rock nauseatingly back and forth.

Scientists have attempted to provide descriptions of animals that could more easily explain away sea snake observations, such as whale poop or bobbing shark carcasses.

But, there are several different species of creature that to this day still defy simple classification based on observations, and these are considered to be not easily explainable.

Some written works dealing with cryptozoology also evoke a theory that animals, potential survivors from past millennia, still unidentified from prehistory, would be the origin of stories of encounters with a “sea serpent,” such as a plesiosaur, the elasmosaurus, the mosasaur, and thalassomedon.

Again, this points us back to our friend the Loch Ness Monster, who has been repeatedly labelled as such.

You can find sea serpents in literature…

A sea serpent is the subject of Jules Verne’s “Stories of Jean-Marie Cabidoulin”, originally published in 1901 under the title “The Stories of Cabidoulin”, then integrated into what eventually became The Sea Serpent.

In the adventure of Bob Morane entitled, “The Cruise of the Megaphias”, published in 1956 by Marabout, Henri Vernes shows his hero a “sea serpent” represented by a mosasaur that has survived to this day beyond the Arctic Circle.

…And in video games

In Ultima VI, a sea serpent is a creature regularly appearing on the shores and in underground lakes.

We hope you’ve enjoyed our little investigation into the question, “What is a sea serpent?”

If you have anything to add, please do so in the comments below.  Indeed, if you have meet any sea serpents on your voyages, do tell us about it!

Previous post: Best Beaches in the U.S.A. for Treasure Hunting