What Eats A Sea Turtle? 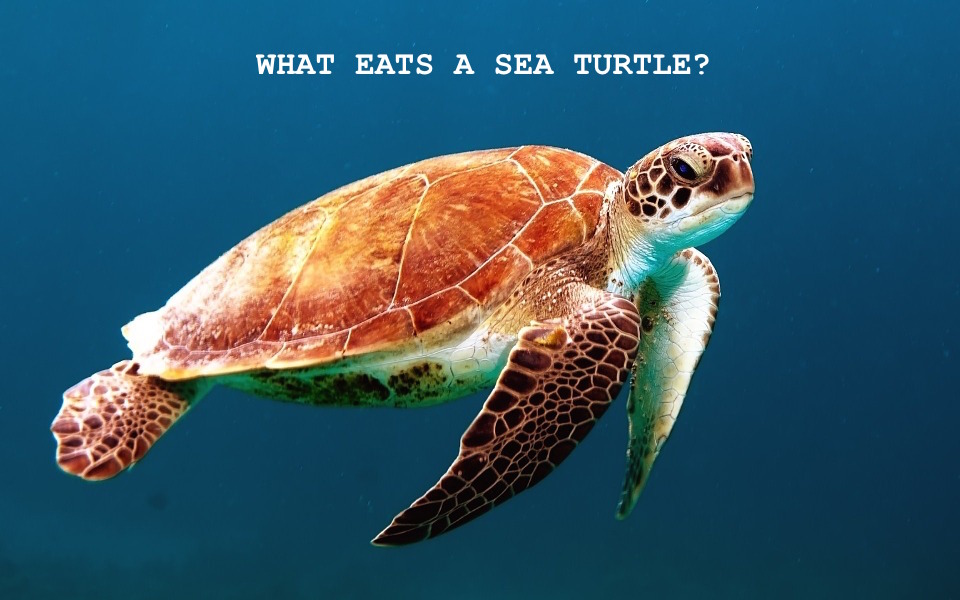 Sea turtles have been around our planet for 150 million years, since the Jurassic period.

They are found in all the world’s oceans, save the polar regions.

Here’s a quick but informative video about what sea turtles are up against these days, in terms of what it takes for them to survive.

As the video will show you, statistically speaking, the odds are stacked against sea turtles from the outset.

In a sea turtles life, there are many obstacles they must overcome, not the least of which is natural predators.

You want to know what eats a sea turtle?  As it turns out, a lot of things like to snack on sea turtles, especially when they’re babies, and sometimes before they’re even born.

Adult sea turtles, while they generally are a little bit less likely to get munched on, still have their fair share of predators.

Cute, right?  Well, the sad thing is, that just a fraction of these little guys will live to see adulthood, for a whole number of reasons, including us humans interfering with their natural habitat.

Here is a list of the sea turtle’s natural predators, starting with what preys on baby sea turtles.

The statistics show that only 2% of baby sea turtles make it through their first year, and one reason for that is these fine feathered fellows, the bird that eats just about anything, the black vulture, AKA Coragyps atratus.

These birds can be found in both North and South America, and, unlike their cousins the Eurasian black vulture, they don’t mind hanging out where humans are, as they are fans of anything edible, such as garbage.

They are also found frequently on beaches, where they gobble up newly born baby sea turtles as they skitter towards the sea. Unfortunately, baby sea turtles that have just hatched, and are heading for the ocean, are the perfect snack for these rather efficient turtle-hunters.

The bones of frigate birds are filled with air and only 5% of their weight, so these birds are meant to fly.

Spying potential edibles from the air, and then swooping down on baby sea turtles is what they’re good at, regardless if the hatchlings are still on the sand, or they’ve made it to the water.

No mercy for the baby sea turtles from these birds.

Say hello to this mid-sized critter that is a native of North America.  Chances are, you’ve seen these guys somewhere before.

Raccoons are mammals who love to scrounge for food of all types, including – when they can find it – sea turtle eggs, and even baby sea turtles, once they’ve hatched.

Raccoons are known for being highly intelligent, persistent, strong, and resourceful.  Watch this…

So, it’s no surprise that sea turtle eggs, which aren’t extremely well concealed by the mother who laid them in the sand, would be a great target for an enterprising raccoon.

Raccoons have the reputation for being a nuisance to us humans, as they tear open our garbage, rob our doughnut shops, and creep about in the night.

None of our complaining makes them any less good at preying on baby sea turtles, unfortunately.

Now let’s look at some predators of the adult sea turtle, who may have a little more defense against predators, but not much!

They have no way to defend themselves other than their shell, and their ability to swim somewhat quickly at times, and that really isn’t enough.

This next video is fairly graphic, but you’ll meet one of the main predators of adult sea turtles, and see how they go about their business.

Once a baby sea turtle makes it to the open water, they have a marginally better chance of survival, provided they can overcome the next series of threats, such as human interference (pollution, hunting, etc.), natural phenomena like weather and currents sweeping them here and there, not to mention the living predators that inhabit the depths, such as sharks.

Sea turtles are known to spend a lot of their time trekking long distances in the ocean, and even from one ocean to another, so they are definitely out there and vulnerable to predators such as sharks.

Over the years, Hollywood has not done much to improve the reputation of sharks, with terrifying movies like Jaws, and, to a lesser degree – Sharknado!

Plus, when you look at a shark, it isn’t likely to inspire a case of the “warm fuzzies”, based on the fact that they look like a killing machine with fins.

Oh look, another large aquatic creature which basically has knives for teeth.

We’re not too shocked that killer whales are known for killing things – it’s in their name for crying out loud!

Not to mention these things are huge, and also inhabit the same waters as sharks, which is of course where sea turtles also live.

Sea turtles, aside from their shell (which often isn’t very tough to begin with), really have no defence against any of these large & hungry creatures, other than act like they’re not very appetizing.

Oh, well it’s true they can pick up some speed, depending on the size and type of turtle.  Some can swim 20 km / hour.  Here’s a look at a turtle swimming fast…

The problem is, if they’re spotted by a hungry shark or similar predatory fish, the adult sea turtle can’t really do much except try to out-swim it.

For example, here’s a chart showing how fast a shark can swim, depending on the shark.

For comparison, while some sea turtles can reach speeds of 20 km / hour (same as a seal), many sharks can swim faster, and preying on smaller creatures is what they do with their free time, and guess what?

Their free time is all the time, so sea turtles had better look out!

Another minor natural “defence” that sea turtles have is their ‘chewability’!  Because of their shell, it might take more  effort for a predatory fish to chew.

Now, if your main defence against predators is that you’re only marginally crunchier than other prey, that’s not much of a defence now, is it?