#Fugmug – 20 Of The Weirdest Looking Fish On Earth 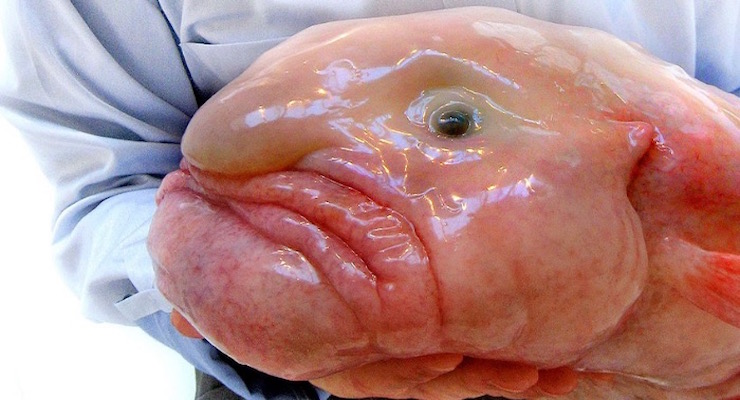 Not even this guy’s mom loves him!  What a fug mug!

Crazily enough, there are plenty more weird-looking mofos where this stargazer fish came from, and that’s what we’re here to look at today…the <drumroll>

Ok, we’ll start off with a bit of a slow pitch, just to get you warmed up here…

Ah, so looking like it swallowed a ton of bubble wrap somewhere in its DNA, they also call this guy the aptly named “Brain Fish”.

You’re not going to bump into this medium sized goldfish unless you’re in China, (where it originates) or Japan, (where they were introduced ) although people do keep them as pets, as they are quite… em… striking.

Go for a dip in the Red Sea and you may find yourself face to face with the whitemargin stargazer.  These can grow up to 14 inches in length.

These odd creatures lay in wait for their prey, and then presumably terrify them to death with their electrifying death glare!

The name Stargazer comes from their eyes being on the top of their heads.

Looking like the Freddie Krueger of the ocean, this monstrous fish would probably scare you off swimming for life, but rest assured, not only are you unlikely to get deep enough down to ever encounter one, but at only seven inches long, they are not big enough to do any damage to humans.

Poor old blobfish, despite being too ugly to be eaten, it is still endangered by fishing for more palatable species, such as crab.

You’re unlikely to discover this weird-looking fish when out for a dip as they live at a depth of up to 900 meters. Phew!

If you ever thought you looked rough after a night on the town, spare a thought for the goblin shark, one of the world’s least telegenic sea creatures.

Although not an endangered species, little is known about this odd looking shark, due to its low incidence of being caught by humans.

Whenever paths have crossed with man , it has usually been in Japan.

Despite growing to about thirteen feet on length, this is more harmless than it looks, and is sometimes described as a living fossil (well, who hasn’t woken up feeling a bit like this?).

Apart from its prey, this fish is not going to do human kind any real harm!  It’s only real risk is to itself…if it looks in a mirror… You’ll have to head down under to see this diminutive beastie.

Not to be confused with other types of sea dragon, like the weedy, this is basically a fish that earns its crust by pretending to be a plant.

And it’s pretty good at it too, luring unwary crustaceans and plankton to their doom.

We know he’s not a “fish”, but we include him on the list as a V.I.P., since it is so interesting.

Fully equipped with a set of gnashers that will make you wonder if it’s made from your grandad’s false teeth, is this bizarre little fish.

Well, we say “little”, but this fish can grow to a length of thirty inches, although between ten and twenty are more common.

This is one fish you might see at the beach this summer, as it frequents the West Atlantic.

Brooklyn has a bay named after it, although it seldom ventures that far north nowadays.

Seriously, folks, what the hell is up with this thing?  Growing up to about six foot tall err.. long, this is a long thin, razor like fish with sharp looking fins that stick out like armour.

Actually, you’ve probably heard of a sword fish.  Well then, you can see why they called this one the “lance” fish.  What’s next, the friggin’ javelin fish?

With a wide gaping mouth, fangs, and general scary demeanor, this fish sometimes likes to eat its own kind, gaining the nickname “cannibalfish”.

This terrifying, toothy fellow can be found in both the Atlantic and Pacific Oceans.

This fish is notable because the male attaches itself to the female, and lives as some sort of parasite on her (much larger) body.

Well, we’ve all had that relationship.

Introducing the Batfish, an unusual specimen, looking something like a  swimming severed head.

Apparently too obscure to even warrant its own wiki entry, the spotlight rarely shines on these bottom living creatures.

Another member of the extended family of anglerfish, this is roughly a foot in length, and unless you’re hanging about the ocean floor, you’re probably not in much danger of running into them!

Looking a bit like a sperm under a microscope, here we have the jellynose fish.  Depending on the type, these can grow up to six feet in length.

They dwell in the Caribbean Sea, the the Atlantic and Pacific Oceans.

Whatever you do, don’t piss off the boxfish.  Especially if you’re another fish, as it can expel a poison that can potentially kill any other fish in the area.

Not surprisingly, the boxfish tends to be something of a loner in life.

These brightly coloured fish are popular with enthusiasts and aquarium owners for their distinctive square shape and bright yellow colouring.

We’re not sure how this fish got its name, or just how sharp tongued this weird looking fish is, but we’re fairly sure we don’t want to get on its wrong side!

Found in the Pacific Ocean, along the coast of North America, they are known for their very large mouths.

Despite being only a foot or so in length, these are highly aggressive little dudes, that seemingly like to scrap frequently in battles resembling a face off or kiss.

At only four inches tall, this is one of the smaller fish on the list.  Another of the anglerfish, the pink handfish has not been long discovered, and is already on the endangered species list.

So called because they use their fins to seemingly “walk” along the ocean floor, these are a rarely sighted creature indeed, and live off the Australian island of Tasmania.

At only ten inches long, this is distinguished by its freaky ability to swallow prey much larger, in fact up to ten times its own body weight.

Not an endangered species (perhaps because it just swallows anything that looks like it might eat it, first) this is a well distributed sea creature that lives all over the world’s oceans, including the north Atlantic.

Highly toxic, and something of an underwater porcupine when inflated, these are usually fairly small (under thirty nine inches) They live in mainly tropical waters.

You’d have to be crazy to eat something that is recognized as being one of the most poisonous vertebrae on earth, right?

But, amazingly some of them are seen as a delicacy in Japan and China, albeit only by experts who know which parts to eat/avoid.

Known primarily for looking mighty pissed off, these are small, (no more than about eight inches in length) but can puff themselves out much larger when necessary.

They live off the coast of Australia.

From the Southern Ocean, and about twenty inches long, these are distinctive for having completely clear blood.

This strange looking customer has a few aliases, including the broadnose chimaera, spearnose chimaera, or straightnose rabbitfish.

Whatever you call it, it must have terrified the fishermen whose trawl it turned up in.

With voodoo ray green eyes, this creature tries to evade human contact, coasting along the sea bed, but it is being discovered more and more often.

Ever been bored to death by some chinless wonder?  Then maybe you have bumped into the lamprey.

Resembling an eel more than a fish, this is completely jawless, and there are at least thirty eight species of these vampire like creatures, who survive by sucking the blood of their latest victims with their suction-like mouths.

Living in both fresh and coastal waters, humanity is usually given a free pass from the lunch menu of the lamprey, unless it is really hungry!

Next post: CAN BABIES SURF? WATCH THESE VIDEOS AND SEE FOR YOURSELF!

Previous post: Palau – Meet Me At The Rainbow’s End