Water Skiing – All About The Sport 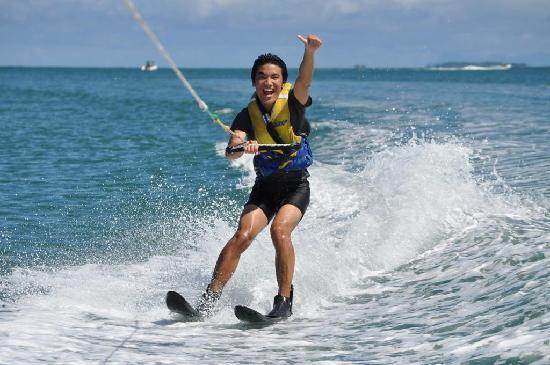 What is waterskiing?  Waterskiing is a water sport, consisting of a person, or persons, being towed by a motorboat, usually over a lake or bay, where the water is fairly calm.

The skier is wearing skis, probably two, perhaps just one, or maybe none.  The skiier is holding onto a rope or line, which is attached to a boat.

It sounds easy, but it does require some basic skills.  Sometimes falling into the water can be exhilarating.

There are also several variations of waterskiing, such as barefoot skiing, or “barefooting”, which is practiced without skis.

That’s right!  Your bare feet become the skiis.  Skiing on one ski is also very popular, and some skiiers go over jumps as well.

Let’s get into the basics of the sport of waterskiing.

Water skiing first came about in France in 1920 on Lake Annecy (Haute Savoie), and was then adopted by American Ralph Samuelson.

At age 18, Samuelson attempted the sport in 1922 on Lake Pepin, first experimenting with staves of a barrel, then snow skis.

Finally, after many failed attempts, he achieved success with wide wooden skis made from spatulas, while his brother drove a motorboat.

Today, Ralph Samuelson is credited as the inventor of this very popular sport.

In 1940, Jack Andersen developed a smaller type of water ski, which was wider and did not drift.

This sport was popularized by American actress Esther Williams in the MGM film “Easy To Love’ (1953).

It’s easy to see why, as the scene is quite epic and magnificent.

Water skiing eventually appeared at the Summer Olympics in 1972, as a demonstration sport, and its popularity continued to climb.

The first skis were made ​​of wood.  In the late 1970s, fiberglass waterskis emerged, as well as other materials, such as carbon or graphite.

Current racing skis are mostly made ​​of carbon, because of its rigidity, longitudinal and torsional stability, and lightness.

Water skis resemble alpine skis, but they are wider.  Fasteners are commonly made of rubber.

A growing number of competitors use rigid “technical shoes” or “tec shoes”, made of ​​a similar material to those used for inline skates.

Currently, the only brand that manufactures technical wetsuits meant for waterskiing is “Reflex”, with a fastening system giving identical release to that of alpine skis in the event of a violent fall.

Skis also include a drift, optionally adjustable, at their rear end.

Most European brands that existed in the 1960s or 1970s (such as SIMS, or French brands Horn, the Italian brand Freyrie), have since disappeared.

In 2006, the Austrian manufacturer of sporting goods, called Fischer, launched a top ski carbon range (the “# 01” model), which was high performance according to published trials.

This is, however, under the name Razor Skis today, which have been  marketed under that name since 2010.

Finally, the buyers of the French brand Reflex, now based in Toulon, have developed a full range of skis – slalom and figures, but also fixtures and fittings.

The skier, who is holding on to a handle, is pulled by a rope attached to a boat. The skiier usually begins from a dock or sitting in the water.

Once the boat picks up speed, the force will assist the athlete in his or her efforts to stay above water.  Moves can be made laterally by changing the skier’s center of gravity.

Waterskiing is possible behind a small boat with an outboard motor, with a minimum of 40 horsepower.

Most boats used in pro-competition usually measure between 4 and 6 meters long with various horsepowers (hp), and these boats have certain characteristics.

They are powered by engines of 300 hp or more for the engine torque that allows rapid acceleration at the start, and then maintaining a constant speed, despite the pull of the skiier, which can be very strong in slalom.

They also have a very clear deck layout, with an advanced cockpit.

In this way, the engine and the traction mat, which is attached to the rope, are near the center of gravity to avoid sway, when a stern slalom skier is behind the boat.

Finally, the vitals of the boat have a particular form, to create a wake as flat as possible.

This latter point distinguishes the ski boat and wakeboard, who need to create a wave of high-wake to allow jumps.

In France, the presence of two persons is required on the tractor boat.  One person is dedicated to the operation of the boat, and the other person monitors the skiier.

This type of skiing is performed with two independent skis, and is generally recommended for beginners.

The largest area obtained with the two skis (compared to that of a mono-ski), gives the skier more lift, and allows him/her an easier lift out of the water at the start.

Young beginners (from the age of 4-5 years) can also be introduced to waterskiing using an adapted version of the bi-skis, which are occasionally linked and weighted at the back, to increase the stability of skiis underwater.

With the bi-ski, boat speed is adapted to the skiier’s template, and is usually between 15 km/h (very young skiiers) and 40 km/h.

The slalom is one of three classic skiing events, with figures and jumping.  In slalom, the competitor is skiing on one ski, called “monoski” or “mono slalom”.

The competitor must manuerve him/herself around multiple buoys i.e.) 26, while the boat passes down the centre of the channel.

The course is inspected by the International Waterski and Wakeboard Federation before the competition can begin.

The tow boats also have requirements that must be met in order for that boat to be used in the competition.

The course has a gateway at the beginning and at the end.  There is a lot of zigging and zagging going on, which challenges the competitors.

For some categories, particularly among women and cadets, the maximum speed is adapted to the competitor’s size, and limited to 55 km/h.

As the skiier moves through the course, things get more difficult.  The boat might speed up, the rope could be shortened, or the buoys could be farther apart.

Having successfully completed the transition to maximum speed, the rope is shortened in successive steps (often referred to in English by shortening “X off” where X is the length of rope that has been removed).

The winner of the event, is the person who manages to pass most buoys with the smallest rope, having completed all previous lengths and speeds.

Slalom skiing is one of the most athletic sports there is.

Most male world records have been held since June 2010 by Chris Parrish, an American skier.

The women’s record has been held since June 2012 by Regina Jaquess.

The performance of Chris Parrish had been conducted in 2007 by Jamie Beauchesne, but had not been officially approved at the time, because the move had been filmed from the edge, and not the boat.

This male world record has since, 2010, repeatedly been equalled informally, and not recognized by the Federation for similar reasons.

The slalom rope respects a color code, allowing judges and the public to know precisely the length thereof:

The jump is a discipline of executing the longest possible jump with a  ramp.  The jumper has 3 tries to hit the ramp, and carry out his/her jumps on two long skis.

Style does not count, as only the farthest distance is calculated with a successful landing.  Ramp height must be between 1.5 and 1.8 meters.

The skiier is pulled behind a boat at a speed previously set by the skiier, but limited to 57 km/h for men and 54 km/h for women.

When the jumper hits the ramp, their speed is clocked at over 70 mph.

In order to jump as far as possible, the skiier will gain speed by making cuts (diagonal trajectories to the axis of the boat).

The male world record is currently held by American, Freddy Krueger, with a jump of 73m.   The women’s record is held by Elena Milakova, at 56.6 m.

The trick skiiers must accumulate the most points over two courses of 20 seconds.  Points are awarded according to a scale linked to the difficulty of the maneuver performed.

The trick skiier uses skis wider and shorter than conventional skis, having the distinction of not having drift.

The figures are made “hand-in-hand”, that is to say with the rudder in the hands, or “rope walk”, which requires a suitable spreader.

This technique and spectacular sport has long been dominated by France’s, Patrice Martin.

Ski racing simply refers to just boat races, with the special tow being a skiier.  A rally on Southern 80, is at Echuca on the Murray River, in Australia.

Boats and skiiers are going about 80 km/h over a distance of at least 80 km.  The 2006 race was won by “Hellbent”, after beating the record by nearly 9 seconds.

In Belgium, this discipline is practiced particularly in the Flemish region.

In competition, teams have one hour to complete their show.  Judges give points according to level of difficulty, the applause, and the performance of each figure.

The judges also give points for music and advertisers, the quality of boating, equipment, and the show, as a whole.

Ski shows are common in amusement parks, and one of the leading teams in this field is the Cypress Garden Team.

Next post: 5 Of The Best Towables You’ll Ever Ride – Summer Toys Review