The Yellow-Crowned Night Heron – Seabird Or Bird That Just Hangs Out Near Water? 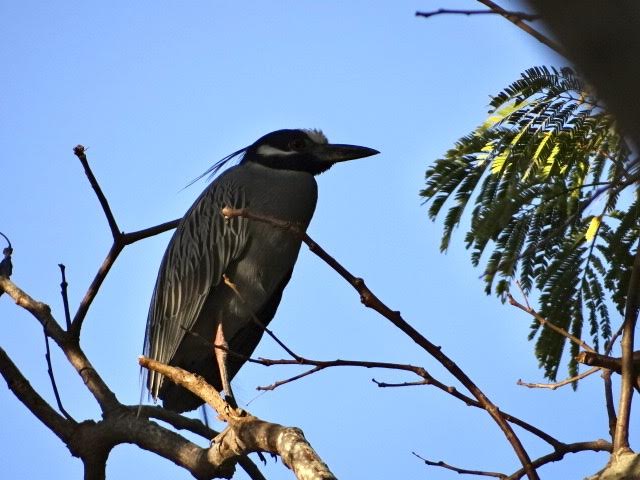 The yellow-crowned night heron is one classy wading bird!  It stands about 3 feet tall and is stockier than most herons.

This bird is easy to identify because of its distinct black and white face, and its purple, gray, beautiful, feathery, body.

Some would say these birds are graceful or elegant in their movements, but the odd nietzchean birder might describe the yellow-crowned night heron as simply exerting its “will to power”.

With their slightly shorter beaks, as compared to other types of herons, and not as slim either, they do indeed love to eat – fish, bugs, crabs, crayfish, small mammals, and even other birds.

This bird is quite skilled at foraging for food.  At a glance, you might think this is a general preoccupation of this bird.

You will often find the yellow-crowned night heron near coastlines in the Americas, sticking near wetland areas, where they tip-toe through the shallows, looking for their next tasty meal.

They are considered to be wading-birds, as they do not really go far out to sea, but instead, can be found anywhere where there is water, in areas such as – but not limited to – drainage ditches, beaches, or swamps.

It would appear that as long as there’s food (especially of the seafood variety) to be gotten, there’s a chance you’ll see one of these herons, day or night, with their distinctive … “Leave me alone, I’m looking for something”, downward gaze and tentative gait.

They are generally not threatened by any real predators.  Their main goal is to eat and simply – be.

Here is a quick video to get you acquainted with this perpetually quizzical-looking bird.

Bucerias is a Mexican town, just north of Puerto Vallarta on Banderas Bay.

In the centre of town, very close to the beach, is a quaint Mexican hotel called Ana Ruth’s.

This hotel is shadowed by the largest parota tree in the area, and living in its canopy, are several Yellow Crowned Night Herons.

With their lovely feathers, relatively stubby beaks, and off-white and yellow cheeks, this heron spends the daylight hours resting in the treetop.

If you happen to be witnessing them in March, look for the nests at the top of the tree and very carefully, try and spot the birds.  They are there!

They might be close together because March is mating season.

Now don’t get it mixed up with any other type of heron, such as the sort-of-similiar-looking-but-not-really black-crowned night heron pictured here.

The yellow-crowned night heron is very visible on the west coast of Mexico, in the Puerto Vallarta area, where some of these pictures were taken.

Puerto Vallarta is in the 7th largest bay in the world known as Banderas Bay.

As the water filters into Banderas Bay from the nearby Sierra Madre mountains, the Pacific Ocean shoreline tends to get swampy with many mangrove forests.

The yellow-crowned night heron loves that type of environment. There is lots to eat, including and especially crustaceans, like crabs which are the night heron’s favorite food.

These birds are very skilled at swooping down to the water’s edge and snatching the crabs out of the water. They vigorously shake them apart, and sometimes swallow them whole.

You may want to shield your eyes if you do not want to witness the food chain / laws of nature taking their course as the heron stalks its prey, but indeed, the yellow-crowned night heron is a natural predator through and through, and pulls this off with a kind of blasé non-chalance.

The female is a bit smaller than the male and less colourful.  The male has a distinct yellow patch on the top of his head.

These birds might sit close together on branches out in the open during the day, and maybe even appear to be snuggling  together in their nest.

The nests aren’t overly large and are made from sticks which are loosely put together and not too sturdy looking, at least at the beginning of construction.

The male always seems to be preening and preparing for the female.

About a week after the birds arrive at their favourite tree, the male begins to build the nest. If they arrived as a couple, both birds decide where to build their nest.

They might even start a nest and then abandon it and build somewhere else.

They might steal material from a close nest being built by another bird.

These herons usually build high up and away from the trunks … for safety reasons of course.

They could live in the same tree for years.  The nests must be large enough to hold the eggs. Nest building is part of the courtship. The female wants a male who can provide a good home.

Even though the yellow-crowned night heron forages for food all day long, its typical feeding habit is to sit in the parota tree from sunrise at 7 a.m. to sunset at 7 p.m. and rest.

They might hop and flutter from giant branch to giant branch and visit one another, but they mainly just sleep and rest.

At exactly 7 p.m. as the sun sets in the months of January through March, this bird lets out one very loud squawk, and flies off into the night.

The night time is their favorite time to feed.

If you live in Ana Ruth’s hotel, or in that neighborhood, you will hear the  loud single squawk as the heron leaves the tree, and you will hear it again when the bird returns to the tree at sunrise at 7 a.m.

Who needs an alarm clock?

BeachBabyBob and his wife, Sue, have spent many Canadian winters living in the treehouse at the top of the Ana Ruth’s Hotel in Bucerias Mexico.

The biggest parota tree in the area is right next to the hotel. You can reach out and touch the branches, and almost touch the herons that live in the tree.

Bob and Sue have studied the yellow-crowned night heron for many hours and paid close attention to its behavior.