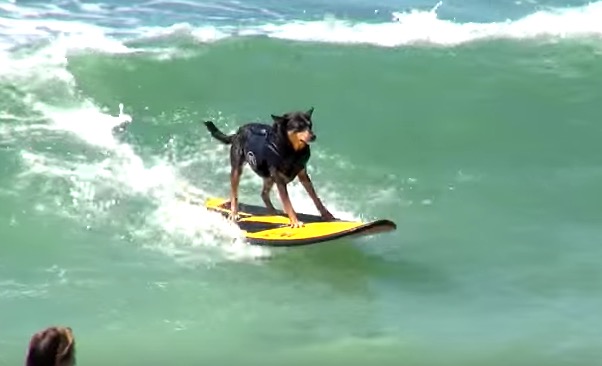 Give them a lake, a sea, a sprinkler, or a kiddie pool, and your water-loving canine will be wanting to get in on the action.

This is why it might not be too shocking to learn that some dogs are not only great swimmers, but great SURFERS.  Yes, some dogs can surf, and they can do it better than YOU.

Here are a few choice videos showing dogs surfing which, might make you say “Awww!” at first, and then have you giving these dogs props for being so bodacious.

Before you start thinking we’re telling tales out of school about all these surfing dogs, let’s roll the footage to prove that dogs can surf!

In the above video, we see that ‘dogs on surfboards’ is really quite a phenomenon.

In this dog surfing contest, held in “Surf City” Huntington Beach, CA, we see crowds gather to catch something a little more impressive than your typical dog show (and those are pretty impressive as it is).

As you can see from the video, the dogs not only have the ability to surf, which is amazing in itself, but they are there to compete.

If you can imagine a dog being described as “focused” and “determined”, these are qualities you will find in dogs at this competition.

Other dogs are lucky to catch a single wave, and many fall off.

Like a dog show, where dogs show amazing feats of dexterity, some of these surfing dogs have been practicing for the event, and are quite ready for the challenge of catching a wave, and riding it in to shore with a visible sense of enjoyment and pride.

Dogs, donning their dog-sized lifejackets, are taken out past the break and then, as part of the contest, are judged on qualities not unlike humans in these surf contests as they come riding in…

How big is that wave?  How long can they ride it?  How about that style?  Overall, this dog surfing contest is a fun time and everyone clearly loves it!

As her owner Michael Yu mentions in this video, Abbie is an Australian Kelpie, which is a breed of dog that loves to jump on things, with one of those things being surf boards.

This breed is particularly good at jumping on the backs of sheep, which is part of the reason she’s such a good surfer.

Watching the above video, you can see that Abbie clearly has that “star power”.   Some dogs that ‘surf’, clearly look like they really don’t “get it”.

Abbie, on the other hand, actually knows what she’s doing out there.

As her owner says, she really didn’t need any training to surf. She simply waits to be taken out by her owner, and enjoys the thrill of riding waves.

The dog beach at Del Mar is a popular spot for aspiring surf dogs to find their groove.

Del Mar allows dogs to go off leash, so it is a very popular spot for dogs to run around and enjoy the beach.

Since this beach is also great for learning how to surf, dogs like Abbie are able to experience that magical alchemy of both surf-ready waves and doggy freedom!

If you’ve ever heard that owning a dog can be a good ice-breaker with the ladies, how about owning two dogs that can actually do tricks while surfing?

Yes, this surfing dog owner has got a good thing going, and his two dogs clearly enjoy themselves as well.

As you can see from the above video, one of the qualities that make a good surfing dog is having good balance.

Dogs like these two have great stability on the board, plus they have the added agility and cooperative nature, to actually move around on the board.

The owner, obviously, has done well in showing these two lucky dogs the ropes when it comes to surfing.

We might add, if you’re thinking that your dog has what it takes to shred some gnarly tubes, don’t forget to put safety first, and not take your dog out too far without a life jacket.

Dogs can be good swimmers, but you don’t want your dog taking a tumble in deep waters.

While only part of this video focuses on Milo’s ability to surf, it is worth a look because Milo is clearly born to do it!

As his owners say, Milo keeps on surfin’ even after his owner (a real Hawaiian surfer dude named Keoni) has taken a spill.

With superior balance, which allows him to ride bigger waves for longer stretches, Milo is yet another dog, who has a true passion for the sport.

We hope that his flea condition has gotten better since this video was taken back in 2015!

Next post: We Review The Best Beach Sunshelters Of 2020