What Are The Different Types Of Surfing Waves? 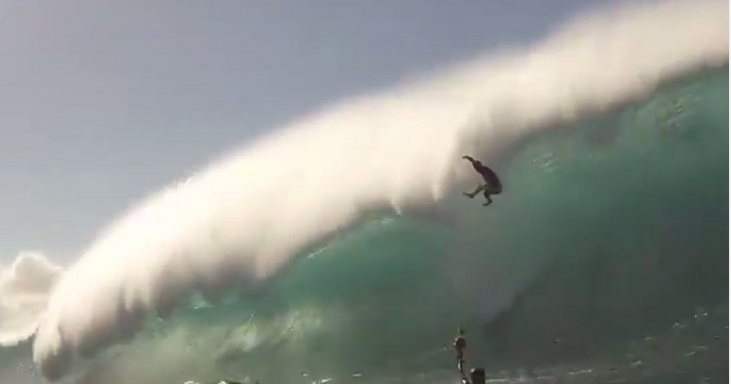 The art of surfing, or he’enalu in the Hawaiian language, was first described in 1769 by Joseph Banks on his ship, the HMS Endeavour, back in the days of Captain Cook.

As he explored the Pacific, I am sure he experienced many different kinds of waves.

Surfing is popular in the Polynesian culture and predates European contact, so this beach activity has been around for a while.

The different types of surfing waves are what makes this sport so exciting. Waves are formed when wind energy is transformed into water energy.

The speed of the wind, the wind direction, and what lies beneath the water, all determine the size of the wave.

Size matters to surfers.  If you are a beginner, you probably don’t want the waves to be too big at first.

Wave action can be merciless.  Even people playing in the small waves close to the beach have to be careful.

Surfers are constantly forecasting the weather to discover the wave size for that day.  Waves are measured from the trough (the lowest point) to the peak (the highest point).

The ‘Hawaiian’ system for measuring the height of a wave can be somewhat complicated, and most people, experienced or not with surfing and wave height, can usually tell at a glance whether or not they should be on the ocean with a surf board, that particular day.

A wave break is simply when the wave energy turns into kinetic energy.

Watch for the “white water” curl to know exactly when this happens.

As a swell approaches the coastline, and comes into contact with the sea floor, the waves will start to slow down.

Some of the waves’ energy is lost through contact with the sea floor. The shallower the water, the slower the wave moves.

As the wave slows down, the waves squash together.  The waves shorten their wave period.

This process is called shoaling and results in increasing wave height.

The steeper the sea floor gradient the more pronounced the wave will be.

The increase in wave height begins to occur at depths of around one half of the wavelength.

Waves have different speeds and different periods. The longer period waves are faster and move farther ahead of the rest of the slower waves.

As the waves travel farther away (propagate) from the wind source, they start to organize themselves into swell lines.

So a swell is the collection of waves moving away from a storm in the ocean.

Although the waves will all be of different sizes and power, and heading in slightly different directions, we usually refer to them as one swell.

“Wave trains” form and these inevitably hit the beach at the same time.

You may have noticed this at the beach and wondered what was happening.

There are three main factors that affect the size of a wave in the open sea:

As the wind dissipates, the waves will start to lose their energy.  They’ll travel as far as they can while being decreased by friction on the sea bed and obstacles in the way.

There are 3 types of waves or breaks to consider.  Not only does the wind play a key role in the size of a wave, but so does what’s under the water.

The Beach Wave  (also called a beach break) is the type of wave caused by the sandy ocean floor.

Hoosegor, in Southern France, is a classic location for challenging beach waves.

This is when the waves break as they get close to the shore.  The sandy bottom or sometimes a jetty or a groyne will cause the break.

A jetty is a structure that projects from the land out into water.

Groynes are examples of hard shoreline protection structures which aim to protect the shoreline from coastal erosion.

Water is always moving things around, including the sand at the bottom of the sea.  The depth of the water also causes the wave to break or not.

Waves that break because of irregular shaped rocks just below the surface, are called Reef Waves, a.k.a. reef breaks.
This kind of wave is caused by semi permanent rocks, coral reefs, or headlands below the water.

You must be familiar with reef waves if you have watched surfing videos or movies.

They create waves that are considered more exciting for experienced surfers than Beach waves.

Reef Break waves can be very dangerous.  Sharp rocks just under the surface of the water can “hurt” when a surfer falls on them.

It has been known for rocks to fatally damage surfers and their boards.

Surfers love the reef break waves when they begin to barrel.

The popular pipeline water is formed, which surfers love to slip inside for some extra thrills.

Surfers must be slightly ahead of the “rolling” water as it breaks, to ride the wave until it unfolds completely.

Point Break Waves refer to the place where waves hit a point of land or rocks jutting out from the coastline.

Check out the film called, “Point Break” starring Swayze and Reeves, to see these waves in action.

This classic surf movie will definitely make you want to grab a board and hit the waves!

Point Break has arguably one of the best endings to a movie ever, which we’ve shown below.  People wait their whole lives for certain waves…

PS – Don’t watch this ending if you haven’t seen it before – we recommend watching the whole movie, as it’s a 90’s classic.

Reef waves are very popular at Bells Beach in Australia.

They can break either to the left or right, and sometimes, if you’re lucky, they form a central peak which breaks both ways around a central headland.

This center break is common at Punta Roca beach in Peru.

Rocks, sand, and coral join forces under the water to create this phenomenon.

Rivermouth waves can be challenging for surfers, but because they are found at the mouth of a river, they aren’t as popular as the other three types.

They can break over rocky ledges or sandy bottoms too.  They can also present a challenge to the surfer, and are also a lot of fun to experience.

Mundaka in Spain would be a great spot to explore these “bar” or rivermouth breaking waves.

The wind and its direction produces rivermouth waves.  This should make it easy for a surfer to decide how good the day is going to be for surfing.

You won’t be surfing too much if there is an onshore wind.  That’s when the wind blows in from the sea, and the waves crumble and have no shape.

A cross shore wind is not good for surfing either.  Again, no shape to the waves because of the direction of the wind.

An offshore wind is the best wind for surfing.  It ensures that the waves rolling in are well formed and break cleanly.

If you are out on the ocean waiting patiently for “Jaws” to come along, you might be thinking about your ride toward shore, and which direction you want to ride the wave.

A wave is either a left or a right hand point break, depending on which direction the wave breaks from the point of view of a surfer paddling and riding the wave toward shore.

If a surfer is paddling to catch the wave, and it is breaking from right to left, the surfer will have to turn left to get on the wave.

A peak is a wave that breaks forming a ride-able wave both left and right. Two surfers can surf it at the same time traveling in different directions.

Surfers are always checking the weather. They should make great weather reporters because they understand isobars on a weather map.

The wind blows strongest when the isobars on a weather map are close together.  The pressure system would be low.

High pressures don’t tend to have the same wind strength.  The wind direction in a low pressure and high pressure system is the opposite way in the southern hemisphere.

Offshore storms generate winds, which blow on the surface of the sea and create ripples, much like when you blow on your hot coffee after a great day of surfing, to cool the coffee down.  It even happens with sand, which isn’t even a liquid.

Capillary, or small waves are initially generated in the direction that the wind is blowing.

The stronger and longer the wind blows, the more effect it has on these ripples, and the larger they become.

The wind can grab hold of small waves more easily than if the sea is very calm.

The wave size is dependent on the wind speed generating it.

A certain wind speed will only be able to generate a wave of certain size.

Once the largest waves that can be generated for a given wind speed have formed, the seas are “fully formed.”

The best spot to surf would be the one where wind, swell, direction, tides, and seafloor meet.

Wind creates the quality of the surfing waves as we know, while its force and interaction with the direction of the swell, the tide at a certain hour, and type and status of the ocean floor create a certain wave condition.

Surfers have traveled the world looking for the best waves.

Considered to be a surfers’ paradise, the Gold Coast in Australia has been known for its 70 km of beaches and four epic point breaks including the Superbank, which is considered one of the world’s finest breaks.

The ride of your life awaits you, as it produces tubes and solid walls.

The Gold Coast has lured surfers for decades, not only for the quality of its waves, but also for the large beach that can accommodate all the surfers.

It is stunningly beautiful and unforgettable.

The Pipeline, in Oahu, Hawaii has the perfect wave crest and considered the “big daddy” of all waves.

Hawaii is the birth place of surfing, and the Pipeline is the heaviest of waves.

The table reef, not far below the 6 meter wave, is razor sharp making this surfers’ challenge all the more exciting.

Not far from Dublin Ireland, surfers seek out the waves of the Bundoran.

Its rolling waves from the cold and unpredictable Atlantic are shaped by bouncing off of the headlands and flat rock reefs.

The average wave height here is around 10 feet, but giant waves periodically roll in, which draws world class surfers to this beach.

The Mentawai Islands are made up of 70 wave-rich chains off the western coast of Sumatra, Indonesia.

The biggest swells here happen from June to September.  These islands can only be reached by ferries, or if you charter a boat.  The surfers say that it’s worth every wave.

Think of long flat barrels off of intense point breaks, and you will fall in love with Supertubes, Jeffrey’s Bay, South Africa.

Supertubes is something all surfers at any levels of expertise should see and try, as it offers the highest walls of water in the area where unexpected scenarios can happen, when the waves start to roll on over to form their tubes.

In order to survive in a world of waves, a surfer must be great at understanding the weather, the wind and the water.

The wind and tide, the contour of the ocean bottom, storms 10 miles out, and storms many miles away, all impact your local break or wave.

Jetties, piers, coves and points, all influence the world of waves, so be aware and awake and alive.  Enjoy those swells!