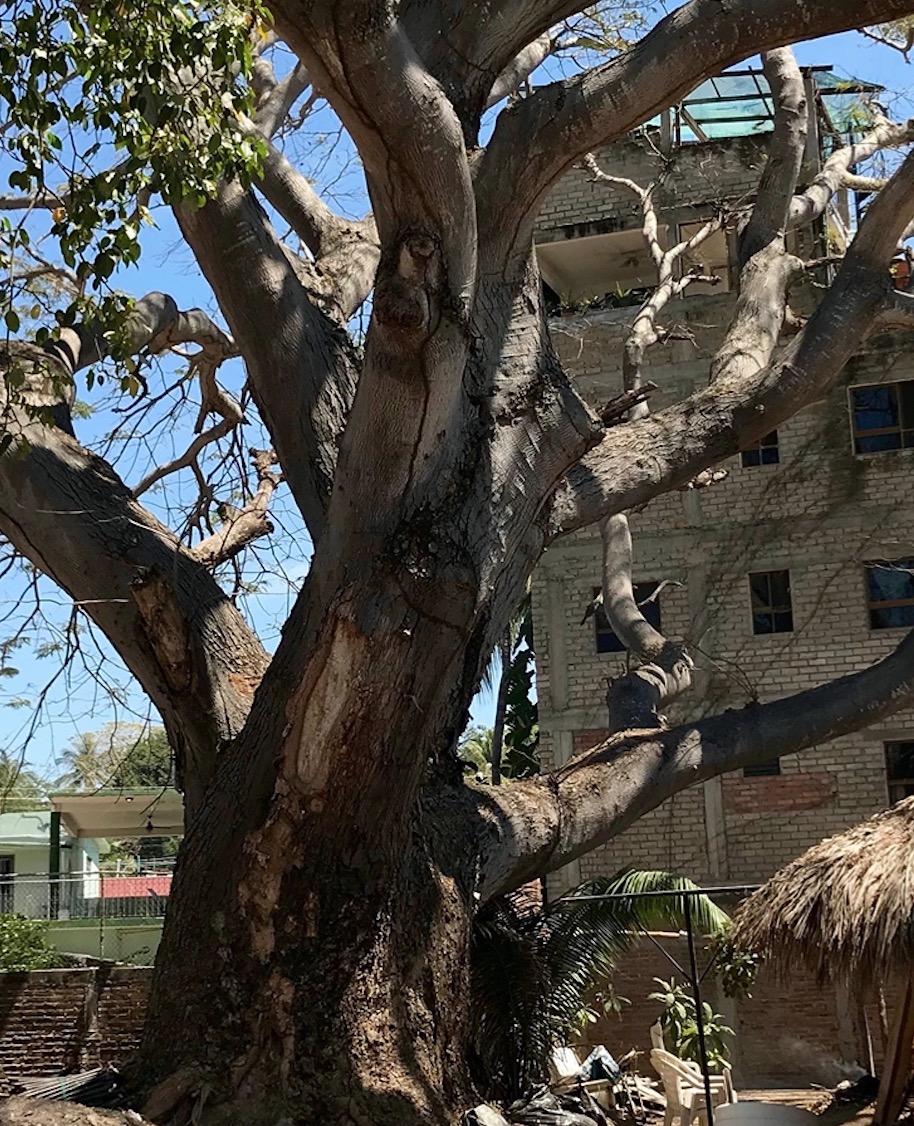 The tropics is the torrid (hot and dry) region on Earth between the latitudes of the “tropic of cancer” in the north and the “tropic of  capricorn” in the south, with the equator half way in between.

If you live in this torrid tropical paradise, expect the trees to be large, green, and unique.  There are thousands of different tropical trees, but this article will only feature my favourite 3.

The Parota tree is a common tree found in the tropics.  I stay in a tree house in Bucerias Mexico on Banderas Bay, next to the largest parota tree in that area. Some say it is 400 years old.

If you’re ever in Bucerias Mexico, make sure you stop by the tree for photos. Just walk the beach southward starting at the statue in Centro of the diver. You can’t miss this monster. Some parotas grow over 100 feet high, with a very large trunk. The trunk could be more than 12 feet around.

The tiny leaflets, bi-pinnate compound leaves, form a majestic spreading crown, announcing to all that the tree is in charge.  Parota trees can be found along the ocean, in the backyards of the locals, and out in pastures.

This ornamental tree is valuable for many reasons.

It provides shade for man, plants, like coffee, animals, like the Yellow Crowned Night Herons and Green Iguana, and cattle. It is a member of the Leguminosae family.

It is known by other names such as the parrot tree, the elephant-ear tree, the Ear pod tree, or the native Huanacaxtle (pronounced … want-cox-lay) meaning “ear”.

Parota trees bear tiny white flowers during April and May.  Just ask local residents about the sweeping of leaves that lead up to the blossoms.

The flowers are small, with yellowish-white petals. The flowers appear in small groups on short petioles.

The tree begins to lose its tiny green leaves in January and by April, most of the leaves have fallen. Now it is time for the flowers to impress its on-lookers.

The green circular fruits are legumes that look like ears.

The Parota’s wood is reddish-brown, lightweight, and water-resistant, making it in high demand for furniture, cabinets, and shipbuilding.  That’s not all.

The light grey bark contrasts nicely with the vibrant green lacy leaves. Watch out for the roots!

They are massive and they anchor surrounding buildings during tropical storms and earthquakes.

The Strangler Fig tree or plant comes in over 850 different shapes and sizes.

Most of these figs can be found in the tropics. Some actually look like a tree, while others are air plants or epiphytes, and some are vines that strangle. The Ficus Maxima fig is native to Mexico but many fig plants were brought to Mexico by the Spanish conquistadors of the 1500’s.

The fruit of the Ficus Maxima is consumed by animals like birds and mammals, and the indigenous people eat the fruit as well and make folk remedies with it. The fig is a very old plant and one of the first to be grown by people.

Because there are so many varieties out there, they can sometimes be difficult to identify, but you shouldn’t have any problems recognizing the basic Strangler Fig tree or vine.

The roots are aerial, thick, gnarly, with a wide leaf span. The fruit appears twice a year and is small and reddish in colour. Bats, many birds, and capuchin monkeys and mangabeys love this fruit. Figs love high humidity. Scientists study figs in depth because this tree acts as a guide for climate change.  Figs are sensitive and prefer ideal conditions.

For example, if you have a Ficus Benjamina Fig inside your home in colder climates, don’t move it around your house, otherwise, all of its leaves will fall off because of the change in its climate.

Like many trees, the umbrella of branches you can see above the ground, is an indication of the size of the root system below the soil.

Strangler Fig trees do just what their name implies.  They strangle other trees.

The Strangler Fig has a symbiotic relationship with a host tree like the Palm. The Fig seeds germinate in the canopy of another tree.

The seedlings live as an epiphyte (air plant) high in the host tree and as it grows toward the ground,  and gets stronger along the way, it begins to stranger the host tree.

The root-like vines or branches will attach themselves to the soil below and then grow back up, squeezing the host along the way. Eventually, the host tree dies, leaving a free standing Fig tree.

From the earliest times, trees have been considered sacred and heavenly. Since trees are the largest plants on Earth, the tree has stimulated the imaginations of many people.

In the Bible, trees represent longevity, strength, and pride. In some cultures, people believe that the souls of great people, live in fig trees, waiting to be reincarnated.

The next time you are near a stately Strangler Fig tree, contemplate its story.

The Ceiba or Kapok tree is considered sacred and it can be big.  Some grow to 100 feet.

There are two distinguishing features: the woody spines on the trunk when the tree is young, which discourages rodents from climbing the tree trunk to attack the fruit pods.

Also the fruit pods look a bit like a mango and are plentiful on the tree.

These fruits are very prevalent in March. The trunk can be a deep green and as the tree ages, the trunk turns grey and stripes might be noticed on the bark also.

These tree seems to be very symmetrical with an umbrella shaped crown and the branches seem to be in layers. The leaves are gone in the dry season but the fruit pods get bigger at this time. (Feb to Apr)

Ceiba or Kapok trees produce a silky cotton like fiber within their fruits.

The fruit pods are called “pochote”.  The finer inside the pods is  highly valuable.

It has been used for clothing since pre-Hispanic times.

The fiber in the seedpods is used to stuff mattresses and sleeping bags especially in countries like China and Arabia.

The fibres also spread the seeds with the help of the wind. Most of the fruit isn’t harvested until the fruit falls from the tree. As the Ceiba or Kapok tree ages, its buttress get very large. This stabilizes the tree and surrounding soil, similar to the Parota trunk.

The native peoples also considered this magnificent tree as powerful and related to the gods. To them, it connected the cosmos, with the earth and the underworld.

Lots of ceremonies took place involving this tree.  It too was considered the Tree of Life.

It was used in weddings and death related ceremonies.  People that live in the upper Amazon jungle, will eat the sap from the Kapok tree once a year to cleanse their bodies of all impurities.

Do not get the Fig mixed up with the Ceiba/Kapok!

One very beautiful natural botanical gardens in Bucerias Mexico is “Tropical America Palm Ranch”. It is located just outside the city limits of Bucerias Mexico and owned and operated by a local cardiologist and his wife.

It is a palm tree paradise and yes it is the place to visit to witness these favourite 3 tropical trees of riviera Nayarit.