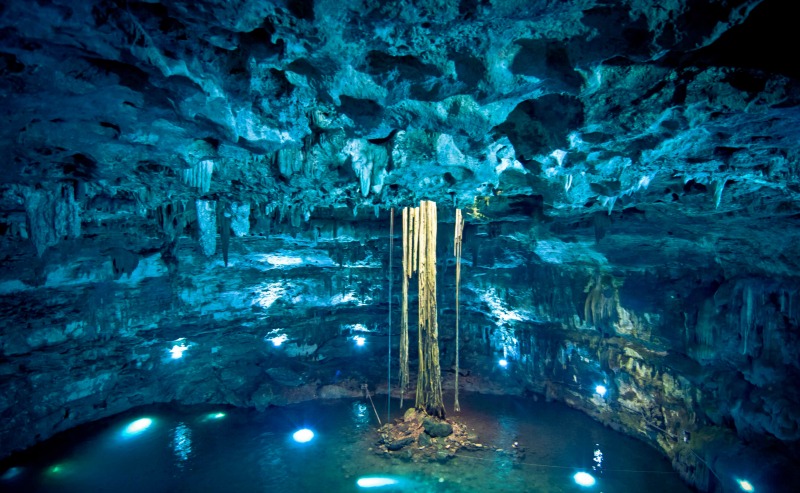 What is a cenote?

The majority of the cenotes in Mexico can be found in the Yucatán peninsula.

With over 6000 cenotes to choose from! A Cenote can be compared to a sinkhole.

A sinkhole is a hole that has been formed because of water that has been continually travelling from the surface to an underground space, while a cenote is more of a natural well.

In a cenote, the rain water that pours down often emerges from the ground slowly to create crystal clear pools. The filtered groundwater usually fills a circular shaped hole and is a marvel to visit during sunny hours.

If the light hits the water just right, you can see rock formations, small fish, and other natural wonders below you as you swim.

Watch the following video on the Top 8 Mexican Cenotes and you’ll get a sense of what they look like.

How are cenotes formed?

Cenotes are formed when waterways pass through the Rivera Maya’s limestone shelf base.

Many of these limestone shelves are located beneath the Yucatán jungle which is why most cenotes can be found in caves surrounded by an abundance of lush nature.

All of the water in Tulum heads under ground which explains the absence of above ground lakes.

Where can cenotes be found in Mexico?

Cenotes can be found where limestone formations are seen near the surface.

Cenotes are mineral-rich and are natural bodies of water, which is why they are usually located a little ways away from most commercial towns or cities in Mexico.

They are deep in the Mayan jungle and are sometimes considered as National Natural Parks because of their fragile ecosystems.

Why were cenotes important in Mayan times?

Cenotes were important for the Mayans because it was a sacred space where they would make sacrificial offerings  and other sorts of offerings to their gods.

In their culture, the cenotes were held up as a space where humans could communicate directly with higher beings.

Watch the following video to learn more about why the cenotes were the life blood of the Maya peoples.

Can cenotes only be found in caves?

No, there are a variety of cenotes that can be found in Merida within the Yucatán state.

Actually, if you don’t want to travel and see cenotes in caves, there is a  special must-see vacation spot to travel to which is located in Progreso.

Here you will find exposed cenotes ranging from small to large pools of clear groundwater.

My family lives in Yucatán and travels here on a weekly basis for the amazing deal of 35 pesos.

They shared this experience with me, and we got to enjoy a nice swim surrounded by an enclosed Yucatán jungle space, as well as spend some time with the adorable neighbourhood animal, the coati.

Here’s a cute video of us watching a feeding frenzy as they munched on corn. The popping sound was oddly satisfying. Watch for yourself!

Are cenotes only in Mexico?

No, Cenotes can also be found in Australia, Belize, Canada, Dominican Republic, United States, and Zimbabwe.

From personal experience, jumping into cenotes in Mexico is just as cold or maybe even less than going into a public swimming pool.

The water temperature is refreshing and some cenotes even have ropes hanging from the ceiling to help start your adventure in the crystal blue water sooner.

Here is another video featuring some of the more spectacular cenotes in Yucatan.

Cenotes are known to be deep, so if you are not a strong swimmer, it is recommended that you bring a lifejacket.

Depending on where you go, there are some rock formations that reach just below the surface of the water, just enough for you to stand on it and have a bit of a breather.

If it is a private cenote, there most likely will be stairs for you to get into the water easier.

Are cenotes in Mexico free?

They are public and private, but the majority of the cenotes have been bought and require a small entrance fee per person.

Many of the local Mayan children make it a job to guide you to the cenotes as well as other local people who can give you a ride to one using a bike with seats enough for three people.

Cenotes are usually located out of the way of villages or hotel spots, so you will need to know where you are going and how much change to bring with you.

How do cenotes stay clean?

Cenotes stay clean thanks to the variety of plant life living in the Mayan jungle, as well as the fact (as discussed previously) that the cenotes are created due to the rain water that gets filtered through the ground.

Cenotes are made up of fresh water, however it wouldn’t necessarily be safe to call it drinking water since there is a large mass of tourists coming in and out of these spaces.

It isn’t known whether the sunscreen or bug repellent can affect the state of the water’s quality, but for the most part, due to the ecological system that caters the cenotes, the water is fresh and clean to swim in.

Next post: We Review The Best Pool Floats of All Time!

Previous post: Things To Do in Mérida, Yucatán, Mexico – From A Local’s Perspective