The Sultry Shores of Turks and Caicos 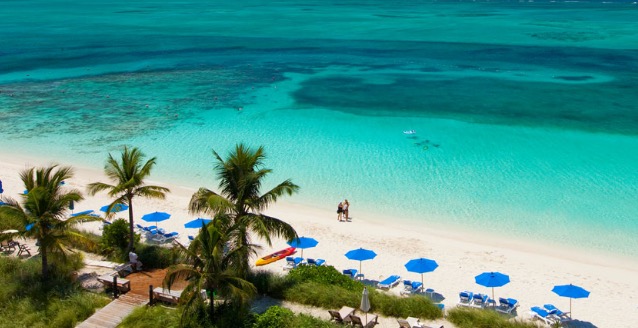 The Turks and Caicos islands are an archipelagic British Overseas Territory, comprised of the Caicos and Turks islands, respectively.

The islands are located south of the Bahamas, and north of Hispaniola (Dominican Republic/Haiti). ¬Ý

The Turks and Caicos islands are nestled within the world‚Äôs third largest coral reef system, making these clear tranquil waters ideal for scuba diving and snorkelling.

You‚Äôll be rewarded for your journey here with endless Caribbean splendour and tranquility, as many of the beaches remain quiet and uncrowded.

You might not be renting out an entire luxury home for your 19th birthday, but there are plenty of hotels that‚Äôll do just fine. ¬Ý

But enough about trying to keep up with the Joneses. Let‚Äôs take a look at some of the most popular beaches in the TCI.

Our first stop is on the most populated of the Turks and Caicos Islands, Providenciales, known locally as ‚ÄúProvo.‚Äù ¬Ý

This island is amply developed, with modern luxury resorts and villas, shops, gourmet and casual restaurants, spas, and a golf course. ¬Ý

Grace Bay has long been voted one of the top beaches in the world.

This stretch of the island is where most of the hotels and action are.

And the reef along the northern shore is long, and chock full of colorful Caribbean fish and marine life. ¬Ý

You‚Äôll be pampered in paradise, if you cling to this shore.

The waters tend to remain clear and calm, making it easy for swimmers of any level, to strap on a mask and explore the fish below.

You can rent diving gear, charter boats for dives, and take part in any manner of watersports in the Grace Bay area. ¬Ý

You might as well take advantage, and explore the terrain in some adventurous way.

But if it‚Äôs not your thing, we won‚Äôt fault you for kicking back with a book and a beverage. ¬Ý

And if you‚Äôd rather get off the beach to change the pace of your visit, there are historic Caribbean villages located on the island‚Äôs south shore. ¬Ý

We always recommend sampling a bit of local flavor when possible. It‚Äôs what traveling is all about.

Here‚Äôs a glimpse of the jaw-dropping beauty of these beaches:

The lake is located in Chalk Sound National Park, which protects these waters from motor boats. We said peaceful, right?

You‚Äôll be likely to see iguanas populating the hundreds of tiny little island that pop up in the Sound, as well as gulls, terns, and herons soaring overhead, and sting rays, lemon sharks, and barracudas swimming the shallow blue waters. ¬Ý

While this natural gem is preserved as a park, it has seen a bit of a decline in recent years; so get it while the getting‚Äôs good.

Thankfully, this Chalk Sound is anything but torturous:

Grand Turk is the largest island within the Turks Islands, and contains the capital city, Cockburn Town. ¬Ý

Wrap it up, folks! Governor‚Äôs Beach is the most popular beach on the island. ¬Ý

While the snorkelling is subpar as far as reef and fish go, the visibility is supreme, and its sand is perfectly white and smooth. ¬Ý

The beaches most unique and distinguishing feature is the Mega One Triton shipwreck. You can‚Äôt miss it. It‚Äôs literally on the beach. ¬Ý

Unlike most wrecks, which tend to be far below the surface, this rusted out beauty has been soaking up the sun, since it washed ashore in 2012 during Hurricane Sandy.

Grand Turk in all its glory:

Since the airport is there, we can safely assume the lot of you will be hanging around Provo. ¬Ý

This beach is a bit off the beaten path, but with its sheltered shores, makes for tranquil swimming and easy relaxing. ¬Ý

The biggest bonus on this beach is that you can spend an afternoon riding a horse around the beach, thanks to Provo Ponies. ¬Ý

It‚Äôs an opportunity to take an unforgettable ride through the gorgeous beaches, and wade into the azure waters on the back of one of nature‚Äôs most majestic creatures. ¬Ý

Next best thing to being a mermaid. We promise.

Save up and swing on down to TCI.

About the author: Patrick has the record of travelling the most out of everyone, visiting over 30 countries around the world in 15 years, and sleeping in the most tents with the least amount of blankets and cushions.¬Ý He can literally sleep anywhere! A few countries Patrick has lived in include India, Mexico, Tanzania, and Morocco, and currently he lives in Peru.