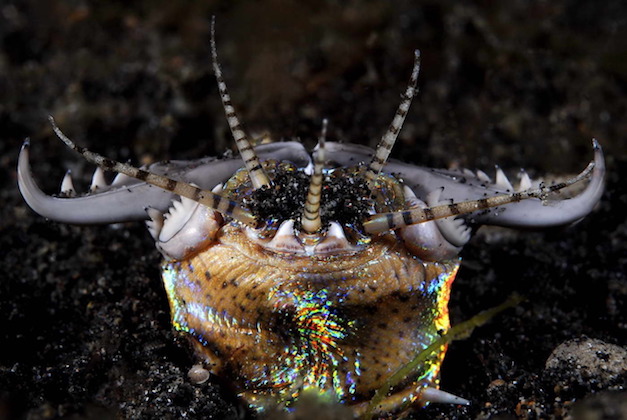 Introducing to you … Eunice Aphroditois, a.k.a. the Bobbit Worm!

This segmented worm or polychaete, is a great candidate for a horror movie.

Or, better yet, the underwater sequel to the movie Dune, which normally features hundred-foot long worms, that people ride on the backs of, on a faraway desert planet.

In the fictional epic sci-fi book Dune, they call worms that look like this Shai-Hulud, consider them gods, and credit them with creating the universe.

For some strange reason, this worm has been dubbed the Bobbit Worm, named after a notorious situation in which a woman cut off her husband’s penis back in the ’90’s.

Seems appropriate enough, except that worms don’t have penises, although, one might argue, they do look like them.

Hey, who decided on this name, anyway?

The Bobbit worm lives in all the oceans of the world, except the Arctic.

The Bobbit worm buries its body under the sand, gravel, and shells on the ocean floor, and waits for its dinner to come along.  It uses its five antennae to detect food.

These antennae have chemical and light receptors in them, which help them to locate something passing close by.

This worm can move with lightning speed, and it has sharp teeth.  Even though it is a hunter, it also eats plants such as algae, making it just like humans – omnivorous.

This long living creature has a mouth called a pharynx, that can turn inside out, and is loaded with sharp scissor-like mandibles.

Once it has captured the food, it returns to its burrow to feed and digest its dinner.  This all takes place in the dark.

By the way, its body is covered with thousands of bristles similar to a cactus, that can inflict pain and numbness on others, so watch out humans.

This Bobbit worm injects a toxin into its prey, which stuns or kills the creature.

The Bobbit worm has a mouth full of very sharp teeth, and sometimes when it attacks its prey, such as a blowfish, the fish is instantly severed in two.

This dangerous worm hides under gravel at the bottom of the sea, and only uses a small part of its body to make the initial bite.  This may appear to resemble an erect penis.

There is also another rumour that the female Bobbit worm, dismembers her male partner’s penis after mating and feeds it to her babies.

Well, as we said before, and I guess we’ll have to say again, Bobbit worms don’t have penises, and they aren’t very good parents either, so this story is untrue. The Bobbit worm can live at depths up to 40 meters, or 120 feet, but it likes the water to be warm.

Since the 19th century, people have spotted them in the waters near Japan, Australia and Indonesia.

One of the largest Bobbit worms ever found was in 2009, hiding out in a mooring raft in Japan’s Seto Fishing Harbour.  It measured 299 cm, weighed 433 g, and had 673 segments.

If you’re on a night “muck” dive in the Philippines, make sure you have a great underwater camera, lots of patience, and a light that works close to the sandy ocean bottom.

Creatures like the Bobbit worm are well camouflaged, and difficult to see.

If you are an experienced diver, in love with macro picture taking, and you love new adventures, then the Lambeth Strait, in Indonesia, is the place for you.

Plan to spend hours scouring the bottom of the sea, with your face inches away from the murky cloudy ocean floor.

But stay alert, and maybe you’ll encounter a nudibranch, a frogfish, a cuttlefish, a blue ringed octopus, or even the ferocious Bobbit worm.

Anilao, in the Philippines, is also a famous “muck” diving site.  For sure, you will get a photo of a Bobbit worm in a secret bay called Secret Bay.

Your biggest task is to find Secret Bay.  It is a secret.

Bobbit worms love schools of puffer fish, so check out the ocean floor below them.  Be careful and stay awake, because they aren’t afraid of anything, not even you.

Watch this video showing the 100-foot desert version of the Eunice Aphroditois.  Now grovel before Him!

Next post: Les Îles Du Salut – Following In The Footsteps Of Papillon

Previous post: Common Questions About Swimming In The Ocean