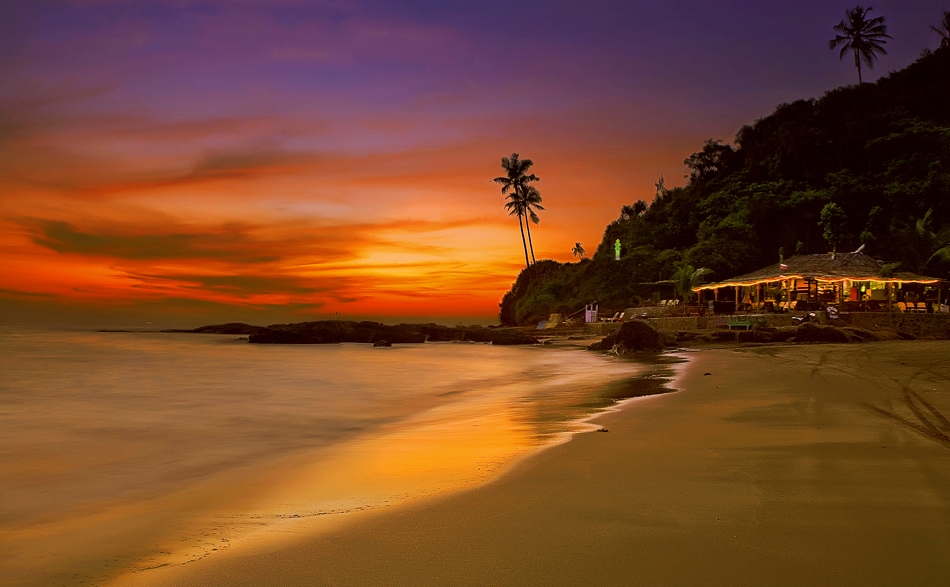 Goa is known worldwide as the beach party capital of India.

This region has a long history of bohemian tourism, with all-night techno dance parties, and beautiful beaches.

Goa is the smallest state in all of India, and is very laid back compared to many of its neighbouring cities and states.

From the hippy days of the ‘60s, to the techno days of the ‘90s, Goa continues to draw thousands of tourists a year seeking a mix of rich culture, relaxation, and perhaps a bit of raving.

A Glimpse of Goa

Goa is a very unique state, having been colonized by the Portuguese for over 400 years.

Coast withstanding, its border is essentially a mountain range, isolating Goa from its neighbouring Indian states.

The longstanding Portuguese rule, combined with the insular nature of the state, made for a noticeable influence of European cuisine, and culture.

You’ll find authentic Indian, European, and other world cuisines, thanks to this history, as well as Goa’s popularity with European and Russian tourists.

Most of India is very conservative compared to Goa.  One of the most obvious differences setting Goa apart, is the lax dress code, especially for women.

It’s not uncommon to see hordes of male Indian tourists gawking at the scantily-clad bikini beach babes, as their native states would never permit such displays of skin.

In fact, it’s considered unsafe for women to show skin in many parts of India.  Not so in Goa.

This is India’s vacationland!  Who said the beach is only for humans?

Known as part of The Hippy Trail to many tourists, the long stretch of beach coast in North Goa can be hiked like a trail from Querim to Sinquerim.

We’d recommend the stretch from Anjuna beach down to Sinquerim, as it has a nice bookend of populated beaches with restaurants, and a long, peaceful middle stretch with hilly ocean views.

Sinquerim Beach is a quiet, yet popular beach.  It’s most noteworthy attribute is Fort Aguada, an old Portuguese structure from the days of Goan rule.

There are beach shacks and restaurants set up seasonally, as the monsoon season sweeps the foundations away each year.

As with all of these beaches, if you plan to go, make sure you go at the right time of year.

Baga beach is one of the most popular beaches for locals and tourists alike.

Get yourself a fresh coconut for next to nothing, and sip away before cocktail hour rolls around.

Or just get to the good stuff.  Foreign cash goes far in India, and with food this good, you and your wallet will both be happy with many meals out in Goa.

Many associate this beach-y paradise as a place to cut deeply loose to trance music.

And while legislation has just recently been passed to ban the infamous all-nighter raves, there’s still an ample amount of amp rattling going down, especially on Anjuna.

Curlies is the most notorious hangout, and late-night spot on Anjuna.

It’s a bit more mellow during the day, with hookah readily available, and your fair share of hippy smokables being smoked.

By night, the surf-shack/club erupts into the fist-pumping scene one would imagine, for a place that has its own subgenre of techno; Goa Trance.

If you’re looking for a bit more metropolitan culture, or straight up countryside, consider taking a trip to the capital city of Panjim (or Panji, as it’s known), or to the picturesque rolling farmlands of rural Goa.

The architecture of Panjim is a reflection of the deep Portuguese influence on the city, while remaining distinctly Indian overall.

And as with many cities in India, don’t be surprised if you see cows, monkeys, and many dogs roaming the streets.

Head out for a cheap bite, and if you’re a fan of adventure, and the hard stuff, make sure to order some feni.

This locally-distilled liquor is made entirely from cashews.  It might be an acquired taste, but see if you can’t coerce your buds into a round or two.

There are numerous worthwhile activities to be had outdoors, from golfing and hiking, waterfalls, to sightseeing in the city, and monkey and birdwatching.

The birds of Goa are numerous, colorful, and beautiful, just like India itself.  From kingfishers to peacocks, even the most beginner birdwatcher can gain a whole lot by hiring a guide, and heading out for an early morning adventure.

You know what they say…?

Next post: We Review 4 Stylish Travel Backpacks For Summer Vacation

Previous post: We Review 5 Of The Best Stearns Life Jackets