Stranded In Aruba – Would It Be So Bad, Really? 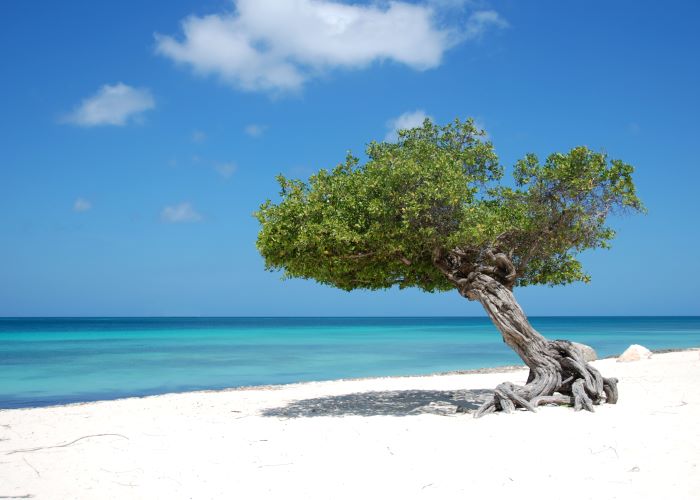 Aruba’s dry climate and endless sunny days make for perfect vacationing. The Dutch Caribbean island is unusually arid for the region, and has a reliable mellow breeze, making it a top pick for vacationers worldwide.

There are countless hotels and resorts to chose from when booking a trip to Aruba. Many of them have swim-up bars with ocean views along the sprawling expanse of beach, and tiki huts with full oceanside service for your lounging needs.

The southern and western shores of Aruba are lined with beautiful white sand beaches, all of which have seen considerable development in recent years. You can easily mingle from resort to resort along this stretch of idyllic shoreline.

As a result of the booming tourism industry, water sports are very popular and easy to come by. Parasailing, jet skis, scuba diving and snorkeling are all popular activities.

Scuba divers will have their pick of coral reef and wreck dives in the beautiful Caribbean waters of Aruba. We highly recommend the Antilla, which is the largest diveable wreck in the South Caribbean.

It’s a German boat that was captured in World War II, and intentionally sunk by its crew to avoid confiscation. If it so happens that you’re not certified to dive, but would like to be, Aruba offers quick and quality PADI certification. Starting with a wreck dive is certainly a great way to kick off your new deep-sea hobby.

Harsh winds and waters have battered and exposed the eastern side of the island, making its landscape harsh and uninhabitable. But there’s still plenty to explore amidst the island’s craggy, desert terrain.

With jeep rentals readily available, you can hire a car for the afternoon and take it for a drive along these arid roads of the east coast.

Some top sightseeing destinations are the old gold mining ruins, the gorgeous natural pool, an authentic Dutch windmill, and the California lighthouse, amongst other sacred landmarks.

Unless you’re in the mood to shop at one of the many high-end department stores found in the capitol city, you’ll likely be able to give up just one long afternoon for sightseeing on the island.

We can’t stress enough that the weather in Aruba is consistently perfect for relaxing on the beach, whether under the shade of a palapa hut, drifting in the manmade currents of your resort’s lazy river, or floating belly-up in the ocean.

The beachfront nightlife tends to be mellow in Aruba. This isn’t a full-blown Spring Break destination by any means. A typical evening consists of a night out for dinner, and maybe a little bit of live music, but on the early side.

Aruba’s proximity to Venezuela –a mere 18 miles offshore– makes for some wonderful cultural and culinary influences.

If the late-night club scene is a must, you’ll find a couple of options in Oranjestad. But the the real night-owl activity tends to take place in the island’s many casinos.

While most of the beaches are located along one stretch of the island, for those staying in the downtown, Flamingo Beach is the place to be during the day.

It’s a stunning, adults only private island with a pair of white sand beaches accessible only by ferry boat. Though Flamingos aren’t native to the island, they are indeed present at Flamingo Beach.

You won’t regret kicking back in this quiet oasis for an afternoon. Full food and drink service is available, but we recommend going up to the bar for speedy service and cold drinks.

You can even feed the flamingos. Just see for yourself:

Aruba was first settled by the indigenous Venezuelan Arawak tribe over a thousand years ago. Europeans first discovered the island when the Spanish explored the Caribbean in the 1500’s.

The island was under Spanish rule for more than a century before the Dutch colonized the island in the 1600’s.

The British intervened for a few years during the Napoleonic wars in the early 1800’s, only to return rule to the Dutch in 1816.

After a long, but peaceful move towards independence, Aruba seceded from the Netherlands Antilles in 1996, to become its own nation under the Kingdom of the Netherlands.

There are more than 90 nationalities living on the island. That said, Dutch is the official language of the island, but Papamiento is the native tongue.

It’s a creole language, borrowing words from Portuguese, Dutch, Spanish, and various West African Languages. Papamiento has experienced a resurgence due to tourism.

Tourism, along with aloe and oil exportation in Aruba, have made for a high quality of life for the island’s permanent residents.

It has one of the highest quality of life ratings in the Caribbean. And that pairs quite nicely with its miraculous weather. As the saying goes around Aruba, it’s One Happy Island.

Previous post: Sink Into The Waters Of Cozumel Mexico