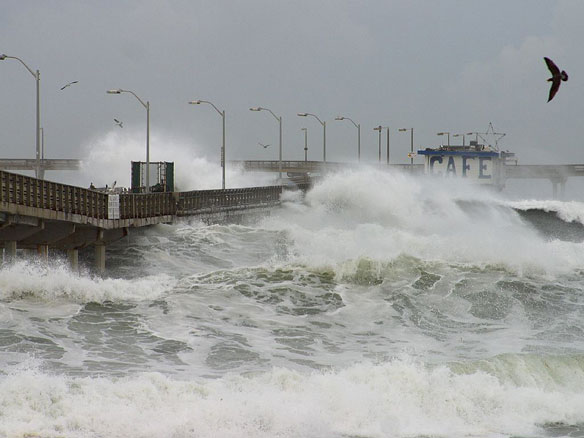 The excitement of a coming storm thrills many of us.  But for the birder (just another name for a dedicated bird-watcher!) the storm brings a few extra goose-bumps—and the possibility of rare feathered visitors.

This is particularly true for those who live near the ocean, and especially near headlands or capes that jut into the sea.

Recall that typical calm before a storm: the air feels heavy and still, dark clouds are building on the horizon.

The wind starts to stir the leaves, and you check your weather source to see if there is a storm watch.  Are you feeling a thrill just thinking about it?

Now that there are professional storm chasers and tornado trackers, those of us who thought we were unusual for loving storms realize we are part of a crowd!

There is something thrilling about nature’s raw force; the louder the thunder, the more we love it.  Maybe it’s the same reason we like scary movies… there is danger, but we don’t feel personally endangered.

Those who live in countries touched by cyclones, tsunamis and “tornado alley” might feel differently.

For birdwatchers—or birders—storms are anticipated and prepared for.  For the same reason that birds might dread a storm (if they actually can anticipate and dread things), birders eagerly await them.

What is it about a storm that changes things?  In a word, wind.

Birds fly.  Most of them anyway.  Penguins don’t.  Some who have gone extinct didn’t.  Unfortunately for them, lack of flight meant death.

They made an easy meal for predators, especially the two-legged kind.  There are all kinds of benefits to being able to fly, besides getting away from the hungry sailors stopping by to replenish the ship’s larder.

Flight gives the ability to travel!  Humans benefit as well as birds. Imagine a world with no airlines. No one would know what “airbnb” means.

The world traveller would be a rare person you’d like to get to know. “What is Bali REALLY like?”

For birds, it’s similar.  Flight means rapid movement is possible.  It’s a lot faster than swimming or walking.  All kinds of possibilities exist because of flight.

For many birds, flight means migration.

The opportunity to take advantage of a sudden population explosion of black flies and mosquitoes in a foreign land might not make you run out and book the next flight, but birds see it quite differently.

For many species flight equals survival of their species through migration and raising the young where they will have easy meals.

Not all birds migrate however.

For some birds, the air is home; it’s where they spend most of their time.  This is true of many seabirds such as the albatross.

The albatross is one of many species who specialize in offshore living.  They hardly touch down, except to nest and raise young.

They spend most of their time air-borne. Many offshore seabirds live more or less on the wing.

Winds take birds up and bring them down.  Winds enable both large and small birds to get lifted up, and moved with very little effort, for thousands of miles.

Storm winds—moving at great speeds and covering huge distances in one system—often take birds out of their normal range, giving birders the chance to see rarities they would otherwise never see in their home territory.

For the birds, this is a challenge to say the least.  The storm can kill them, or wear them out to the point they don’t have the energy reserves to continue.

So most storms are not useful to the birds.  The winds are too high and often move in the wrong direction, or move in circular patterns, spitting the wayward bird out in the middle of nowhere.

If you are a blackpoll warbler flying from Canada to South America direct, you don’t want to miss the continent; hundreds of miles out to sea, your fuel gauge will show “empty” and you’ll be wondering where the landing strip is.

Sadly, this does happen.  One way we know this is through new advancements in bird banding using transmitters.

Tidal surges also can create havoc for birds, particularly in breeding season. Birds which nest on beaches, such as the endangered piping plover, can have their season’s breeding efforts swept away by a high tide and crashing waves.

Those are just a few of the challenges faced by our feathered friends, in this case, of purely natural origin.  It’s not easy being a bird!

Certainly, we don’t wish harm to birds.  We wish them all smooth sailing and good take-offs and landings.

But if there is a storm, you might as well get your binoculars or your scope, and get down to the beach.  Be sure to wait until the winds start dying down enough to make it feasible.

Next post: Bird Migration Fall-Out – Where And When To Spot Vagrants

Previous post: We Review The Best Beach Towels Of 2020