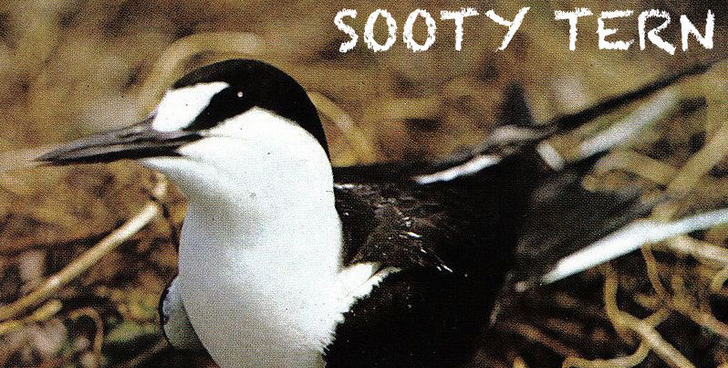 A trip to the beach is both relaxing and entertaining. There is always something to do or look at, if you are not too keen on simply relaxing in the sun. One thing beach dwellers enjoy is bird watching.

One bird that causes quite a disturbance to the sunbathers trying to catch a few rays is the sooty tern (Onychoprion fuscatus).

This is a bird which is abundant on small ocean islands, and coastal areas.

One of the few seabirds which are truly sea worthy, the sooty tern never stays in one area for long, as it makes its way up and down the Pacific coasts and the Americas.

Often found in Florida along the two coastlines, the sooty tern’s population near Bush Key, Florida exceeds 20,000 pairs during nesting season, which is February to July.

This giant avian attraction brings bird-watching tourists from all over the world, anxious to see such a spectacle.

The sooty tern’s most notable feature is its obnoxiously loud call, which never seems to end.

Sailors jokingly named the bird “wide-awakes” due, in part, to their call sounding like “wide-a-wake”, and in part to the ear-piercing loudness which exceeds OSHA guidelines for exposure longer than 30 minutes.

Get a load of this congregation here of sooty terns. This is somewhere you might want to wear industrial grade earplugs before showing up.

The tail has a deep, long fork which is rather attractive, and its coloration consists of a dark gray to black upper and white underbelly and throat.

The legs of the sooty tern are black, as is its bill.  It is unlike most other terns in that its coloration and size is unique, though similar to the much smaller bridled tern.

Although it is common to see ocean going birds floating in the ocean waters as they rest, the sooty tern rarely takes part in this habit. Probably due to its thin plumage, which is also a unique trait of this bird.

The sooty tern’s diet, like most other shore birds, consists mainly of fish, crustaceans, and crabs taken from the ocean, but relishes on small squid.

Rarely does this bird dive into the water, instead, it flies over the water, and plucks small bait fish from the surface, which are attempting to flee from predatory fish below.

Fisherman often look for large flocks of these birds as they seek out the prime fishing areas of the ocean.

The sooty tern is rarely wrong in pointing out large gatherings of tuna, making the sailors catch much easier.

The sooty tern reaches sexual maturity around the age of 8 or 9 years, making it one of the latest birds to mature.

Breeding occurs on shore, and it lays 1 – 3 eggs in a scraping, or small hole which it protects fiercely.

Even though the sooty tern has the space available to spread out while breeding, it chooses to nest near to others in its colony, or “ternary” to be exact.

This results in a large amount of disagreements and beak fighting among the birds.

Once the sooty tern reaches adulthood, it leaves its nest, and flies out to sea, not returning to shore for 3 – 9 years.  In the bird world, this is a phenomena not found in any other species.

The sleeping habits of the sooty tern continue to perplex scientists, since it is rarely seen on land, or on the ocean surface resting.

Some scientists believe that the sooty tern has mastered taking short naps while soaring on ocean air currents, however, that has not been proven.

The sooty tern, although found around the world near oceans, has very little inter-specific variations although divided into 2 geographic subspecies:

This species is found in the Atlantic regions and the Caribbean.

The only noticeable difference is the underbelly of white.

All other characteristics are similar to the second species.

The underbelly varies from light gray when the plumage is new to a dull white on older, worn plumage.

This species is found from the Red Sea to the Indian Ocean and down to the Central Pacific.

A unique bird, the sooty tern is a spectacle to see and an enjoyment to watch.

Scientists must further research this bird to fully understand its mating habits and how it can manage its extended voyages out to sea.