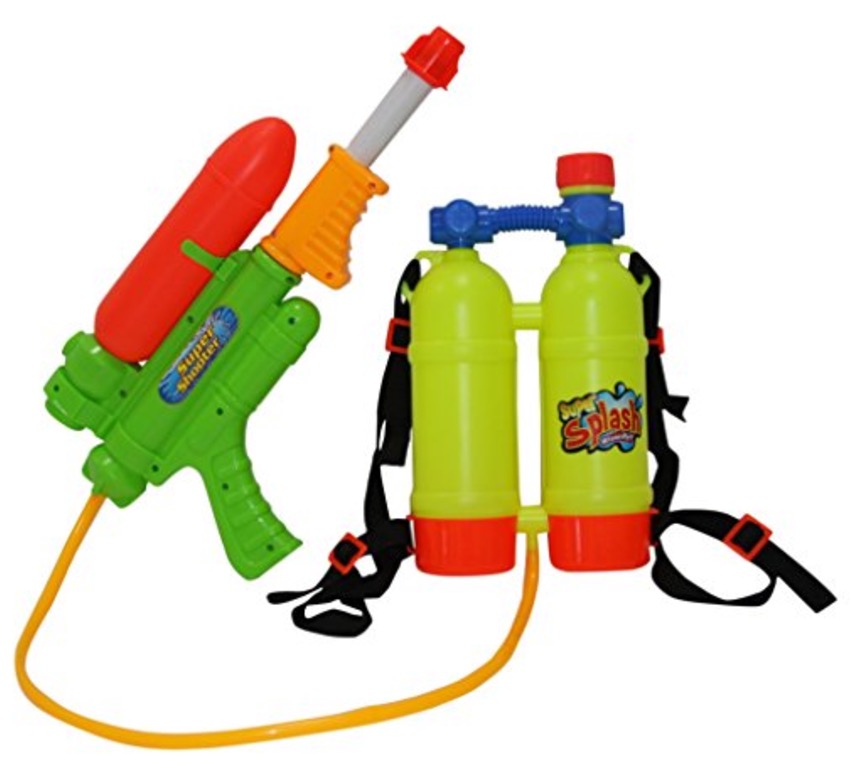 This unique water gun took place at #2 on our list of best water guns.  Unlike the others, it is not made by Hasbro, and it is not a nerf water gun.

However, that does not stop this from easily being one of the top water guns on the market, that you should consider buying.

This is the type of water gun that can easily make anyone unstoppable in a water gun fight, and may just make other people quit because they won’t be able to handle your prowess on the ‘battlefield’.

The first feature that we have to speak about would be the double barrel attachment as a backpack on this water gun.

This is probably the most astounding feature to speak of, as it is a unique addition that none of the other ‘best’ water guns on our list possessed.

What’s so great about this feature, you ask?  Well the fact that you can have a backpack filled with water in a water gun fight, is probably the single greatest advantage you could ever give to anyone.

We wouldn’t even suggest that anyone try to go against someone who has this level of artillery at their back?

Aesthetically, the gun isn’t doing too bad either!  It comes equipped with a forest green, lime green, burnt orange and light orange color scheme, which makes it look toy-like, while giving it somewhat of a camouflage feel as well.

Overall the gun looks like some high-powered toy.  The straps that are attacked to the backpack full of water, are also designed to maximize comfort and be as unobtrusive as possible, which is a huge plus.

Often times, with toys like this, designers/manufacturers fail to integrate this core function into their products, and they often end up coming up ‘flat’.

The tanks themselves are 17 inches in length, so they aren’t be too burdensome to carry for small children.

This is a pretty important factor, because anything that is too difficult or heavy to carry, when implemented in this manner will undermine the whole purpose.

The water gun shoots very far as well, which is extremely useful when in water gun fights.  The only setback is that there’s only a single stream that comes out of the gun.

This stream is powerful, though, and it can deal effective ‘damage’ (soaking your opponent) if you spray it at them, so lookout!

Overall, this gun is probably one of the most unique ones that you can find on the market.

With the ability of the water gun itself to be held with just one hand, as it is essentially strapped to a water tank on your back with the effect of gravity allowing it to shoot, without the necessity of equipping it with a pump-action feature.

The uniqueness of the water gun’s design, its ability to remain lightweight even in spite of one carrying two tanks of water, are all things that we love tremendously about this water gun.

We also like the utility of the water gun itself, in comparison to other models out there.  We’ve scoured the web and can assure you that we have not found another gun out there that functions quite as well as the SINTECHO water gun.

If you’ve used a water gun in the past, then one of the most annoying aspects of water guns is that you constantly have to stop your progress and action in order to refuel the gun, and if you’re not near a water source of any sort than this can become extremely annoying and cumbersome.

However, this probably is almost eliminated with the SINTECHNO.

It also helps to consider the fact that this water gun is still a first rate gun, even without the attachment of the two extra water gun tanks.

It has a substantial amount of distance behind it, that allows it to mark out targets with a steady, yet strong stream from several feet away. That, in itself, is a feature that we would expect from a very high-quality water gun.

Perhaps the best aspect of the entire gun, is the fact that it is extremely child-friendly.  Although the presence of two tanks may make some folks a little skeptical as to how mobile one can be, especially if you are a kid!

But– there is no reason to fear.  The SINTECHNO’s adjustable straps are designed in such a way that the burden of carrying the weight is transferred from the user, by the innovative support straps that are attached to the tanks.

In this way, users are free to move nearly uninhibited by the gun itself.

For all these reasons, we absolutely recommend that you go out and purchase this gun as soon as you can, if you can!

Previous post: We Review The Best Water Guns For Children 2020