Sink Into The Waters Of Cozumel Mexico 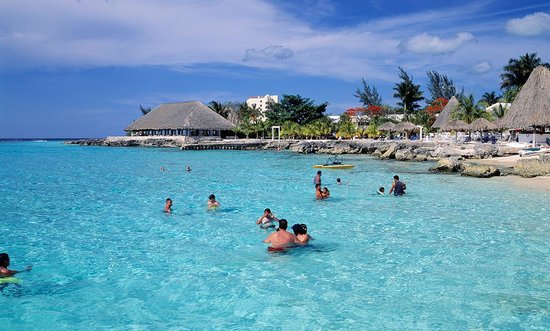 The island plays host to secluded beaches, ancient ruins, and all the modern amenities needed for a full vacation experience.

And while her famous beaches provide a much-desired atmosphere for relaxing, Cozumel’s actively-inclined visitors will find plenty of charter fishing, snorkeling, scuba diving, and other adventurous watersports to make the journey unforgettable.

The large presence of healthy coral reefs makes for perfect snorkeling and scuba diving around Cozumel.

The island consistently ranks in the top 3-5 destinations for scuba diving, and with reefs starting just twenty feet off shore, there is an unlimited amount of incredible snorkeling as well.

So if you’re not PADI certified, don’t sweat it. You can enjoy a night of frozen margaritas, and snap a mask on the next morning without any fear of the bends.

Many who visit the island opt for boat tours, but we recommend the DIY approach.

Renting your own gear, if you don’t own any (which you should!) is very easy, with a number of surf shacks on the island offering daily rentals.

The only hang-up can be navigating the miles upon miles of beach the island has to offer.

Most of Cozumel is great for snorkelling on a visibility level, but the currents can vary.

The advantage to these active currents is that the waters remain clean, getting a constant flow of nutrients, keeping both the coral reefs and the fish happy.

The downside is the occasionally perilous undertow.

The north end of the island tends to have stronger and less predictable currents, so unless you’ve got some advanced expertise in swimming dicey waters, we advise heading to Cozumel’s south shore.

Snorkeling is very popular and widespread in Cozumel, and the constant human presence has resulted in some brave and friendly fish throughout the coral reef system.

Cruise ships and storm damage are the main detractor to reef health currently, but the island is vigilant in their stance for preservation of the Cozumel Reefs National Marine Park.

The eastern shore of the island is affectionately referred to as the ‘wild side,’ and for good reason.

The undertow is particularly dangerous here, even in the shallow waters, making it unsafe for diving, or even recreational swimming.

Check out the Chankanaab National Park for snorkeling amongst underwater statues, Corona Beach Club, or The Money Bar Beach Club for peaceful reef visibility, or the Snorkel Center for chartered trips.

Here’s a video of some chartered reef dives:

As far as proper scuba diving is concerned, depth has its advantages in Cozumel.

Snorkelling the shore is great, but the most stunning bits of the Mesoamerican coral reef are located a few hundred feet below sea level, off the island’s west shore.

Divers won’t have any trouble finding charters on the island, but booking dives ahead may be wise, especially during the high season.

That said, if diving and snorkelling aren’t your thing, you’re bound to be impressed with the diversity of the beaches, bars, and restaurants throughout the island.

San Miguel has all the necessities for those looking to shop, club, dine, and drink.

It’s the island only city, and worth exploring if you’re itching for a bit of safe, small city nightlife, or vibrant local culture.

Cozumel is often overlooked for its historical roles in Mayan and Spanish settlement.

The Spanish settled on the island in the 1500’s and brought a Christian influence to the island.

Their presence was ultimately invasive, as they brought bloodshed and disease to the island’s 10,000 Mayan inhabitants.

Abraham Lincoln attempted to have the United States purchase Cozumel during his presidency, in hopes they would turn the island into a colony for freed slaves.

But Mexico wouldn’t have it, and the deal fell through.

Many of Cozumel’s original Mayan ruins have been destroyed, but a few historic sites remain.

We recommend checking out the San Gervasio Mayan ruins located at the center of the island.

For those looking to spend a whole lot of time in the ocean and on beautiful beaches, Cozumel is a perfect destination.

The peak dry season months are February to April, and the fall months can be rather wet, but with 350 days of sun a year, you can’t go wrong with a visit to Cozumel.

Here’s a clip of a turtle spotted during a dive:

Next post: Stranded In Aruba – Would It Be So Bad, Really?