Sea Urchins: The Biology and Life Story of This Mysterious Ocean Floor Dweller 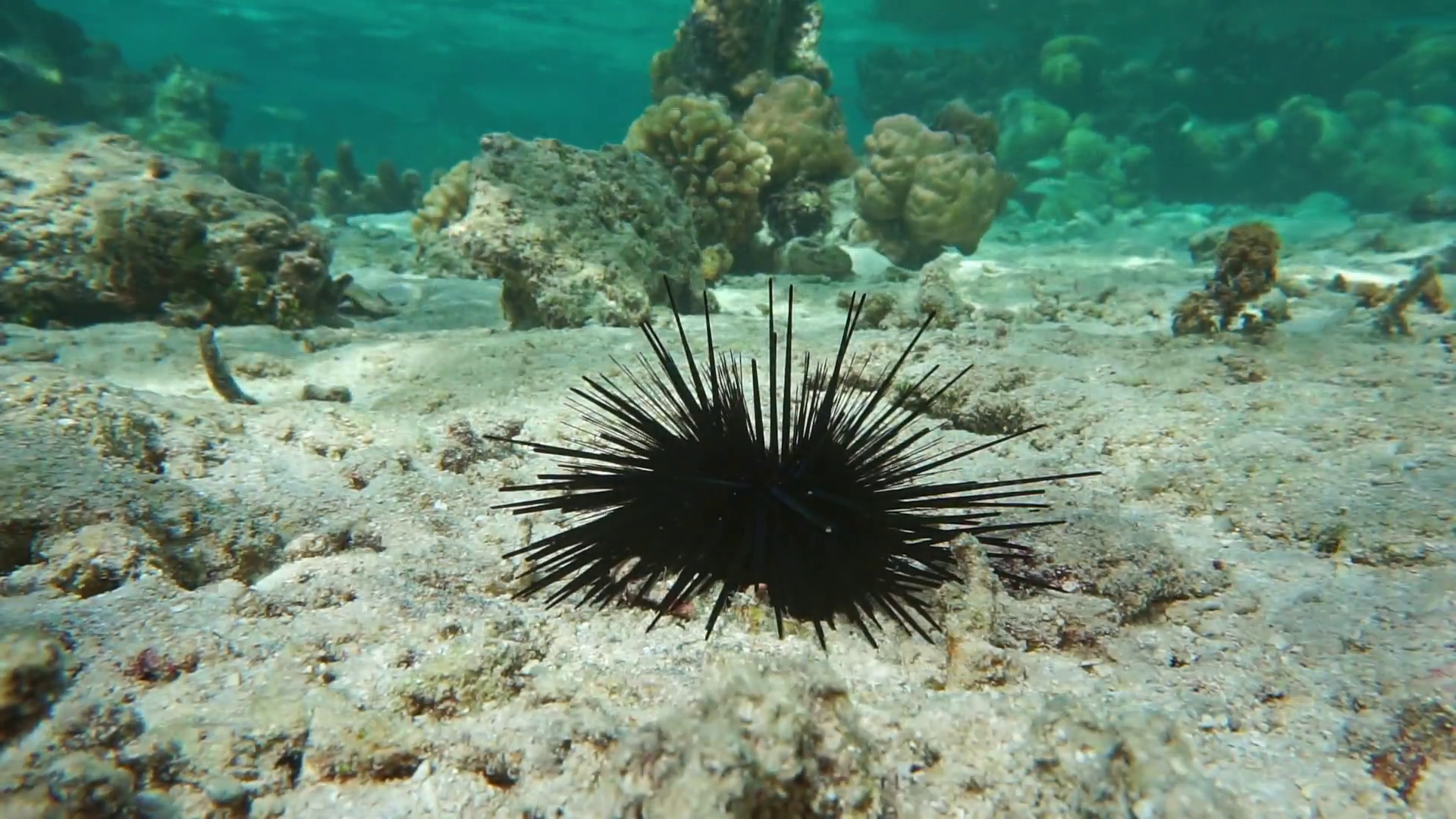 Sea urchins are a very cool animal that has been on the planet since the Ordovician Period began and ended around 443 million years ago.

This means they are very well adapted and resilient.

We’re kind of curious about this mysterious plant-like creature, so we did some research. We want to share it with you in the name of greater knowledge of our planet and all of its inhabitants.

What are sea urchins?

First off, just what is a sea urchin? They look like plants – rather spiky seaweed – but they are indeed an animal.

Rather globular in shape, there are two subclasses: modern sea urchins and slate-pencil urchins with thick spines and algae growing on them.

They are either spherical or flat in shape, with tons of spikes that are used to defend them from predators and other enemies.

Humans commonly associate them with injury since some species are known to have venomous spikes.

They are tiny: typically any sea urchin will be six to twelve centimeters in diameter, meaning they will fit right in your hand.

They are formally defined as an echinoderm: marine species that includes any animal with five symmetrical parts arranged around the centre.

They also have sharp points on their skin, since these animals don’t move around much. The sharp points are there to stop enemies or predators bothering them.

They live on the ocean floor.

Urchins have hundreds of tube feet, tiny and transparent, enabling them to crawl around.  These tube feet help them glide along the ocean floor, moving with ease from location to location.

Feeding mostly on algae, urchins are in turn eaten by and preyed upon by starfish, wolf eels and triggerfish.

While there are more than 800 species of sea urchin on the planet, there are several factors uniting all of them, including their biology. We will explain all of that here.

The word urchin is an old word for hedgehog: urchins are known as hedgehogs of the sea. This is due to the spherical body hosting movable spines. (The hedgehog has spines or spikes for the same reasons as urchins.)

They are born with bilateral symmetry – symmetry that splits down the middle of them, and then develops into five-fold symmetry as they grow.

They are deceptively still: in fact, their spines move and this is the best indication of motion. Interestingly, when touched, all the spines move toward the point of contact.

They have no eyes or legs but their tube feet enable them to move over hard surfaces at the bottom of the ocean. The motion is quite similar to starfish.

They move in all directions. The spines help to propel the urchin along, pumping water in and out of the tube feet all the while.

They move mostly to acquire food, travelling anywhere from 3 to 20 inches in a day depending on available food supply.

They are mostly herbivores, living primarily on algae, but are also known to eat sea cucumbers, sponges or mussels. This, then, means that sea urchins are omnivores, since they can survive on either diet, with a blend of both being most ideal for them. Actually, this makes them flexitarians….

They have a hard shell of plates, which is covered by thin tissue (dermis) and skin (epidermis).

Most sea urchins have five teeth composed of calcium carbonate and what is basically a tongue inside their mouths. Their mouths are called Aristotle’s Lantern because they are shaped like the lanterns of Aristotle’s time.

While it’s true they do not have what we recognize as a real brain, the sea urchin has a fairly simple nervous system.

The brain is essentially a ring of nerves around the mouth. From here, there are five nerves that branch out into smaller nerves of the feet and spines.

Sea urchins are sensitive to light, touch and chemicals with sensitive cells around the mouth and in the spines and feet. This ultra-sensitivity compensates for their lack of eyes, allowing them to follow threats with their spines. In this way, the entire body rather acts like one big eye that sees 360 degrees around itself.

Rather than having a cardiovascular system circulating blood, sea urchins have water-vascular systems, meaning their tiny bodies are filled with water rather than blood. As you read earlier, their spines help channel water in and out of the tube feet.

The red sea urchin can live up to 200 years long!

Where do they live?

Sea urchins live in all oceans and climates, but no matter where in the world they are, they are always found on the ocean floor. Professional divers will go down to hunt them and they are fished industrially.

They also live along coral reefs. Sea urchins do not like the light. They live at the bottom of the ocean where it is dark. They purposely hide themselves away in crevices or under rocks, for example.

They live as deep as 6800 metres below sea level.

When reproducing, the act of fertilization takes place in the sea water. This means there is not physical contact between the two sexes.

Within half a day, the fertilized egg will transform into an embryo, then into larva. This larva will then, over the course of a few months, develop those exoskeletal plates that we all love and become adults.

In fact, in the 1800s, biologists began to study them, realizing that their embryonic growth could be easily monitored under a microscope. It helped them learn that sperm do in fact penetrate the egg.

The purpose of the sea urchin is to feed on algae, which stops overgrowth, and to then in turn feed larger sea creatures.

Urchins eat decomposing matter, too, which helps reduce the amount of rot in the oceans. They will feed on dead fish and barnacles, using their long spikes to capture food particles floating around in the water.

While the sea urchin has many defense mechanisms, their hunters have ways of working around them. As we mentioned, they are prey to lobsters, wolf eels and sea otters, among others. However, if they are not hunted, they devastate their environment.

It is really important that all parts of an ecosystem work in tandem to keep a healthy, synthesized balance.

Most species have long and sharp spines that protect them, while others have poisonous spines. They live in clusters of 5 to ten urchins to make them stronger.

In fact, other subaquatic animals like crabs or shrimps will take shelter among the sea urchins, hiding and changing colour to blend in, shielded by those spiky points.

Some crabs even carry urchins (or sharp shells) as protective objects in their claws. See? Humans aren’t the only ones using tools!

They will use their spines to defend against any threat whether it be animal or human. As we mentioned, they will either stick the enemy with their spines or sting them as some species of urchins have venomous spines.

They are able to regenerate tissue as needed.

Sea urchins are vulnerable to spotting disease, which had not really been studied before the 1970s.

Their gonads – both female and male – are considered a delicacy in many parts of the world. They are often served with pasta sauce, omelettes or scrambled eggs, or eaten raw with lemon and onions. They are also commonly found on sushi, eaten raw.

This mass fishing is a big threat to their survival, as well as pollution in the water and ocean dredging. Ocean dredging is the removal of sand and silt from bodies of water.

If it lives at the bottom of the ocean, then of course there are legends surrounding it. Especially a species that is nearly 500 million years old.

There is a lot of folklore and mysticism surrounding these mysterious creatures. For example, it is known that a fossilized sea urchin will protect against witchcraft or black magic in the form of lightning, because the tradition goes that the urchin fossils are thunderbolts. These traditions were mainly in Denmark and England.

Another tradition says they are the petrified eggs of snakes and will protect against poison, heart disease and injuries from battle, and so they were carried as such. It was believed that snakes, in the middle of summer, created magic foam that turned into these eggs.

Sea urchins are really neat little buggers. There are so many animals living in the ocean who look like plants but are, in fact, animals. Their extremely effective defense mechanisms and survival skills have kept them in existence for nearly 500 million years.

It is also wildly impressive that such tiny animals – being only 6 to 12 centimeters in diameter – could live up to 200 years, making them one of the oldest animals on earth.