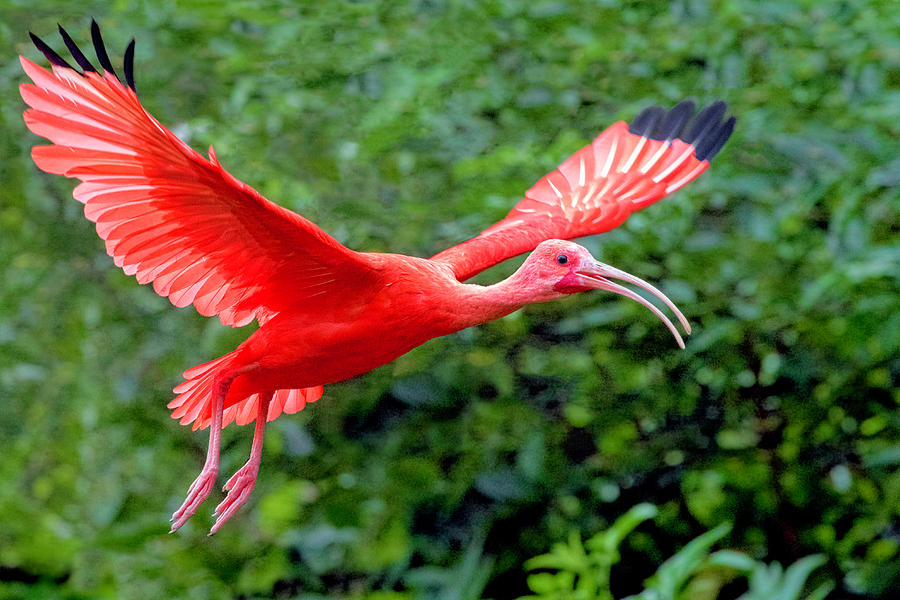 One of the most amazing shore / wading birds of South America is definitely the Scarlet Ibis. The scarlet ibis is a species of ibis in the bird family Threskiornithidae.

It is really hard to miss because of its eye-catching, scarlet red color, and striking long black-colored bill.

Here is a great introductory video anyone who isn’t familiar with the Scarlet Ibis.

As you can see from the above video, the Scarlet Ibis has rather rosy feathers, due to the shrimp it eats.

The scarlet ibis forms a super-species with the white ibis and there have been scientific proposals to merge these two species into one for their ecological similarities.

They are highly social birds which often form some of the largest breeding colonies.

The scarlet ibis is also one of the two national birds of Trinidad and Tobago. It is also featured prominently on the nation’s coat of arms and one dollar bill.

Today, the bird is internationally known as a “must see” natural treasure, and the country’s ecotourism industry largely supports the livelihoods of many Trinidadians.

Our today’s post is all about this unique species of ibis. Here is exactly what we are going to talk about here:

Ok, let’s get to it! We’ll start with some quick facts about this unique and impressive bird species. Moving on to its appearance and features… The scarlet ibis is relatively red in color with black wingtips that are visible only during flight. The black color on the wingtips comes from the melanin pigment which gives the bird strength.

Their juveniles display a combination of greys, whites and blacks across their body. Over the first two years of their life, the birds slowly begin to change from the blacks and greys into red. Their red color mostly comes from their diet being heavily focused on red crustaceans.

The adult scarlet ibis measures anything between 50 and 65 centimeters, the males being slightly larger that the females. The males usually weight around 1.5 kg. The males also have a bit longer and thicker bill which usually measures between 40 and 60 cm.

The scarlet ibis has a wingspan which usually measures 40-50 cm. Like most wading birds they have long legs and a long neck. Their legs are slender with a slight webbing between the feet to enable a good grip while perching on trees. The scarlet ibis has a long range of distribution and it is native to places such as Argentina, Netherlands, Antilles, Suriname, Venezuela, Trinidad, Tobago, Colombia, Guyana and French Guiana. There have also been records of seeing these birds in Florida.

They usually inhabit wetlands and other areas of shoreline. Rain-forests, tropical mangroves, mud flats, shallow bays and marshes are great habitats for these birds.

Next, we discuss their eating habits… In the wild, the scarlet ibis feeds mostly on crabs which are found around mud flats during low tide. Crustaceans, mollusks, worms, insects and frogs are also part of its diet.

In captivity, the birds are usually given a commercial pellet diet on a daily basis. Different types of fish, insects, crabs, and crustaceans are given depending on their availability.

Next, we talk about their reproduction. Scarlet ibis breeding season usually begins in mid-September. The males perform courtship dances to attract the females. They preen, shake, bill pop and perform flight maneuvers as a part of their courtship dances.

Once the females select the right partner, the mating pair builds their simple nest consisting of a loose platform made of sticks and leaves.

Egg laying usually take place from November to January. The females lay three to five eggs which are then incubated between the male and the female for 19 to 23 days. The mating partners remain faithful for the entire time they are raising the chicks.

The chicks are ready to leave their nest after 40-45 days. They generally reach their sexual maturity after 4 or 5 years.

On to the social behaviour… Scarlet Ibises are highly social birds which usually live in colonies that consist of about 40 to 50 birds. On some occasions these colonies even swell to thousands for protection.

When flying the colonies form a V-shape which makes flying easier and more efficient. This formation also allows for the bird at the front to move to the rear of the formation in order to rest. When flying the birds have their neck and legs fully stretched out.

Scarlet Ibises are also known for associating with storks, spoonbills, herons and ducks while flying or feeding for safety reasons.

Predators of the scarlet ibis are raccoons, snakes and large cats. They are also hunted by people for their feathers.

Finally, we discuss their population status… The global population of this bird is estimated at 100,000 to 150,000 individuals. It is listed in Appendix II (threatened in some parts of its range) of the Convention on International Trade in Endangered Species (CITES).

That’s all folks! Thanks for reading!