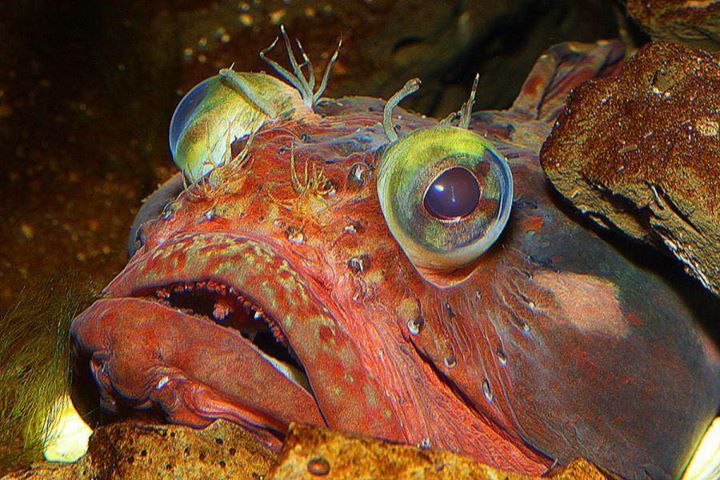 What does that word mean to you?

Some may say the sarcastic fringehead is the stuff of nightmares. This creepy little fish can scare off animals much larger than itself with one show of its distended mouth.

There are some really neat creatures who live in the sea. You can tell the scientists and marine biologists who discovered them had fun naming them.

The sarcastic fringehead is one of those funny fish: this bad boy is feisty, quick-moving and rather amusing to watch, so long as you’re not in the line of his prey.

He may not have the ability to speak, but this sucker can get downright mean.

Discovered in 1858, this super aggressive little guy grows only to about 12 inches in length with a long and slender body, large pectoral fins and much smaller pelvic fins.

Does “sarcastic fringehead” sound like someone you want to mess with?

This fish is known for being very aggressive and territorial. They are big fighters. When two fringeheads battle for territory, they press their swollen mouths together. It looks like kissing, but they are actually determining who is the larger fish. The larger fish – or the fish with the larger jaw – win dominance.

That means the winner gets to keep that sought after abandoned shell, where these fish live. Often habitat is why they fight. They will also lash out if anyone tries to disturb their nest of eggs.

You may have seen videos circulating of funny fish that hide in crevices and shells, only to lash out and then go back into hiding. That’s them.

They live in the Pacific Ocean, more specifically off the coast of North America. We don’t recommend this, but if you’re trying to go diving to see them in person, you’ll find them between California and Mexico, to be exact.

These fish take refuge and make homes in abandoned shells, which can take some time to find because the shell has to be just perfect. They can be found anywhere from three to sixty metres down below the surface.

Here’s a video of a couple of sarcastic fringeheads having a little dominance contest.

Sadly, the only ones who want to kiss a fringehead are other mean fringeheads during a duel. With a brownish-grey colouring, they will have red or green patches on their bodies.

You’ll find funny, wispy, wavy tendrils on their heads and the usual dorsal fin along the back (theirs is quite long to match the shape and fluid movements of their bodies. After all, they need to be exquisitely squiggly to slip into those shells and crevices).

The most remarkable thing about these fish, like other marine animals, is their defense mechanism and how they can go from being non-objectionable creatures in the water, to being the most terrifying thing you have ever seen. What triggers this transformation?

Threats in the environment, of course. Typically they hide and wait in crevices or their shells, staying and looking as neutral as ever.

They will stay there most of the time quite peacefully, their bodies buried in the home with only their heads sticking out. But if someone tries to sneak in and grab them, they LASH OUT!

No one is welcome in the homes of these footlong fishes. They are very temperamental and territorial. We’re surprised the zodiac sign of Cancer is represented by the crab rather than the sarcastic fringehead.

What are you doing in my swamp?

Their mouths blow up and expand sideways, revealing their tiny teeth, but the teeth are not what wins the war. They will go after whomever tries to get in their home or attack them, no matter their size.

At the first sign of danger, they blow up, their mouths opening and stretching way out to the sides. It is a common technique for any animal to make themselves look bigger in defense.

For example, have you ever gone camping in the woods and been trained to deal with bear sightings? You’re supposed to stand up tall as you can with your arms in the air to look big.

The idea is to intimidate the bear/predator so they get the impression you are just as big and scary. They will see it’s not worth the risk and leave you alone.

What’s amazing is watching two fringeheads go at it.

First, if enraged, they will snap their jaws in warning, opening their jaws as big as they can go to look monstrous.

Two fringeheads going at it

The fringehead looks rather like an eel with its elongated body, except its head is far more bulbous. Their eyesight is one of their weaker points, so they often can’t tell who the larger fish is until the wrestling match.

During the wrestling match, the two fighters will open their mouths as big as they can go and pressing these distended mouths together. They open like this to look bigger but also to show their teeth.

Like many wild animals and creatures, showing the teeth is a threatening expression to appear monstrous and deadly. Their teeth are razor sharp and serve as a reminder that they like to eat, thank you very much, and certainly will, if you try anything funny.

While their mouths are pressed together, the two fish will wrestle each other until one gives up and slinks away.

After the fight they will inspect a neighbouring shell and scope the area to make sure there are no enemies. It is rather neat to watch them in motion. As they swim around the ocean floor, they use their pectoral finds rather like feet to push them along.

Luckily, they are not too interested in humans. They tend to only fight animals who present a threat to them, but this can include divers who go poking and prodding around. Don’t bug the sarcastic fringehead!

Truthfully, it’s beyond us why people go snorkelling or diving in the first place. Sure it’s mysterious and beautiful down there, but there’s endless depth…and all manners of spooky sea creatures with deadly teeth and stings.

For scale, they are twelve inches in length. Measure that out and imagine holding one in your hands.

And reassure yourself that there is no way they could hurt you. They’re actually kind of cute when you realize how small they really are in scale comparison to us humans.

They are virtually harmless unless you go poking around their habitats!

Mating and Reproduction or, Two Fringeheads Going at It Again

Reproduction happens the same as with most other fish: through the laying and hatching of eggs. Rather prehistoric, ain’t it? Just cool.

The female lays her eggs in some kind of abandoned burrow. We don’t know why this fish likes abandoned places so much. They are the anarchopunk squatters of the ocean.

Once the eggs are laid, the male will then watch over them. The eggs are unbelievably tiny, measuring about 1mm in diameter. It is the male’s job to protect the eggs from predators and other threats until they are hatched.

The mating cycle of the sarcastic fringehead is pretty similar to many other species on the planet: females are selective and this drives the males to intense territoriality and competition.

Opening their large mouths is a way they establish dominance and fight off predators. The teeth and the colouring of the mouth is quite frightening, as it grows up to four times its size when closed.

Usually the loser will surrender before there is a physical fight.

So what do these ferocious little guys eat?

it depends on the time of year. You might expect them to eat only human flesh, but that’s not true.  They eat tiny things like plankton.

They eat a variety of prey: scientists are rather uncertain of their entire diet. One thing is for certain: during squid spawn season, fringeheads will snack away on squid eggs. Squid eggs are actually a valuable food source for a lot of species.

Sarcastic fringeheads aren’t your friends.  They don’t want to be your friends, and they will never be your friends.  That said, you shouldn’t dislike them, because they just want to do what they do, much like you.  Except, in their case, they want to hide out in their little hideouts, look truly bizarre to human eyes, and occasionally engage in battle with other fringeheads.  Oh, and reproduce.

That said, next time you’re snorkelling, you should hopefully be able to identify one the next time you see it!  If your goal is to see one of these creatures, good luck to you!

Sarcastic Fringehead was featured in our article, “Weirdest Looking Fish On Earth”

Next post: Whitemargin Stargazer: From the Darkest Parts of the Planet