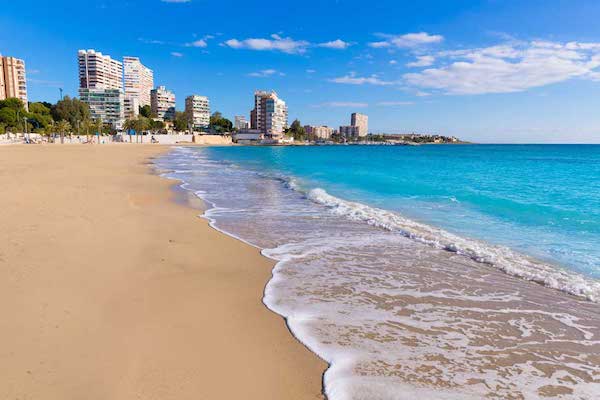 Sun, fine golden sands, and the Mediterranean – what else can you ask for?  San Juan Beach, the most famous in Alicante, lies just 10 kilometres to the North East of the city.

Part of the Costa Blanca, the beach stretches for 7 kilometres from the coves of El Cabo de las Huertas to El Campello, one of the many fisherman towns in the area.

With plenty to do and plenty to eat, the beach is located in an area with lots of services, facilities and businesses.

Lovely hotels, a large amount of restaurants to choose from, bars and excellent transport that connects the beach with the center of Alicante, all of them located all along the beachfront.

All in all, it’s just a perfect place to stretch out on the sand and feel the sea breeze.

Located in an area with lots of apartments, San Juan has seen rapid growth in the last few years, making the future of the beach really promising.

Here’s a map of the San Juan beach area.

But the beach wasn’t always like that. A long and vast unknown place in the old times, San Juan Beach and the area behind was once a sea of sand dunes where only the North African pirates and adventurous fishermen dared to go.

The area remained uninhabited until the early 20th century, but this would change with the arrival of archaic cars and the construction of a railway connecting Alicante with Villajoyosa.

Suddenly rich inland businessmen appeared looking for the perfect spot to build their summer houses, and so came a new wave of life, changing the scene of the beach forever.

Around 1960, the local middle class converted the area behind the beach into the perfect place for their second residences, something that is still possible to appreciate in the aesthetics of most of the buildings.

With the arrival of the heavy construction, the beach became a magnet for the Madrileños that escaped from the capital during the summer, making the beach a popular spot for holiday makers nationwide.

During the 70s and the 80s, the San Juan area became a busy holiday destination with a great nightlife.

Sadly, towards the end of the century, the San Juan Beach area lost many of its pubs and bars due to severe low seasons when most of the residence would return to their primary homes. On top of this, other party areas rose in Alicante leaving San Juan a little quiet.

Additionally the beach condition wasn’t the best during those years. Due to the wind and tides, the gold sand was disappearing from a large part of the beach, causing a considerable drop in the number of visitors the beach was seeing.

A major construction was needed to regenerate the beach. Huge amounts of sand were brought from the near mountains to make this project possible.

The results were incredible, with 900 meters added to the beach’s length, and a standardized width of 90 meters throughout the full stretch of the beach for visitors to enjoy. Thanks to this, the beach has been stable ever since.

Today, the scene in San Juan Beach is much different to the one in the late 90s. With the construction of the tram line, connecting the beach with Alicante, El Campello and Benidorm, the area came to life once again.

The creation of San Juan Golf course at the beginning of the 2000s, and the huge construction of flats all around the area brought thousand of people to live in the area.

Furthermore, part of the road next to the beach was closed to traffic and a fantastic promenade has been built, making the place perfect to enjoy a nice day in the beach.

With thanks to all this and the new businesses popping up in the all around, from new pubs and clubs to surf schools and sport centres, the area is becoming more alive every day.

What to do in San Juan Beach

Surf, beer and tapas! As said before, there is plenty to do and plenty to eat.

Although San Juan Beach is not known for its waves, many surf and aquatic activities schools can be found in the beach. If it happens that you are in the area during summer, I would personally recommend ‘Aloha’.

With three different schools located in different spots of the beach, “Aloha” is the perfect place to enjoy of a fun day on the beach. Surf lessons, kayaks and it is possible to rent even a sail boat!

Also, if you fancy a drink while you are sunbathing in the beach, you can pop in to any of the six beach “chiringuitos” located all over the beach. Cheap beers and cocktails to refresh your body in one of those hot Spanish days.

Opened only during the weekends, “Casa Julio” and “Casa Domingo” are the most emblematic restaurants in the area. Both of them located inside the beach, they are the perfect places to enjoy the best Spanish tapas and a wonderful paella. At least one of them must be in your to do list!

If you fancy enjoying a nice glass of wine while having some more tasty tapas, then “Chico Calla” is the best choice. Open most days of the week, they have the best selection of Spanish wines and local beers.

Just next to “Chico Calla” you can find “Flamingo”. Probably one of the older pubs in the area, it is set as a typical English pub with a large selection of beers. You can’t leave without trying their special stroganoff chips!

Also the nightlife scene is back in San Juan! Pubs and nightclubs have opened again offering a really good party option if you don’t fancy going all the way to Alicante.

“Texaco” the older club in the area, it’s the perfect spot to enjoy some cheap drinks and watch a football match during the evenings. Saturdays and Sundays they host the biggest party in the area, but don’t drink too much if you can’t handle a hangover on the beach!

Next post: We Review the Best Garrett Metal Detectors

Previous post: What Is Seaweed and What Is It Used For?