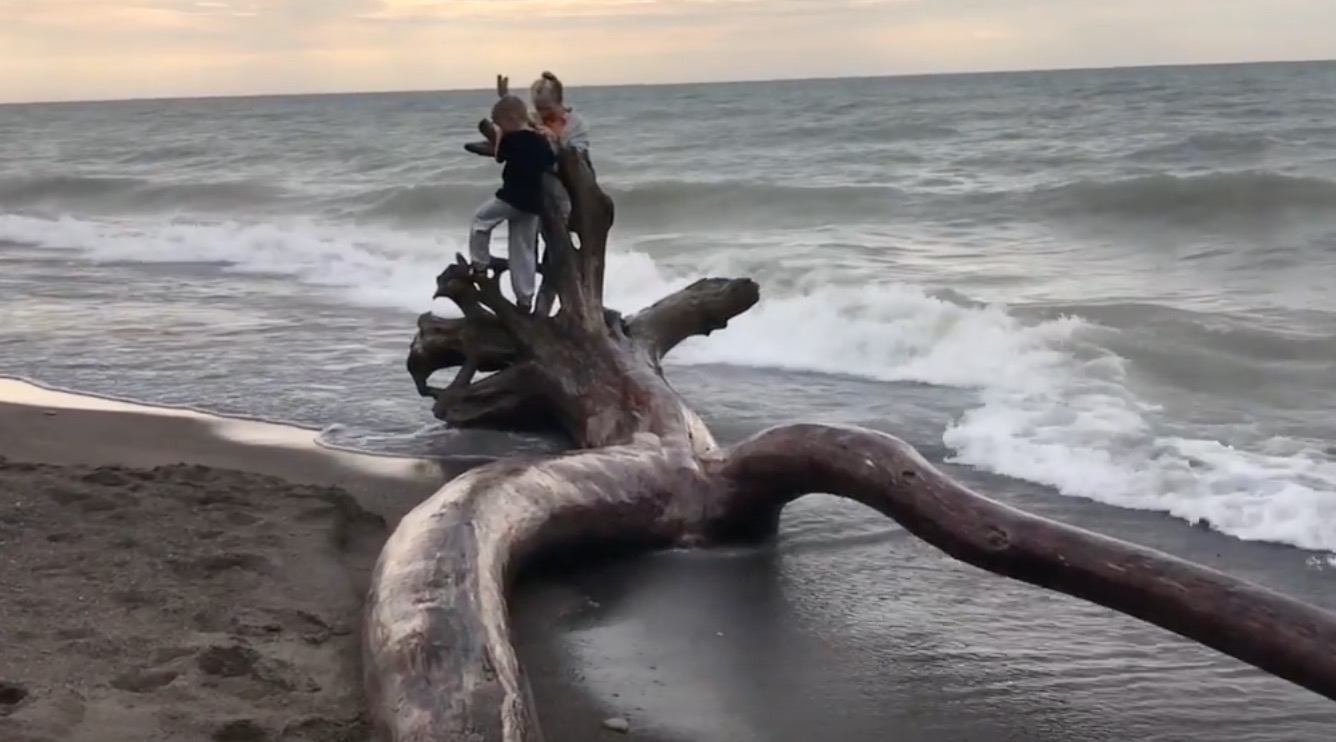 Port Stanley is a beach community in Elgin County, province of Ontario, in the country of Canada.  It is located on the north shore of Lake Erie at the mouth of Kettle Creek.

Lake Erie is one of the Great Lakes in the centre of Canada, and that is the home waters for Port Stanley.

If you can find Toronto, drive west on the 401 highway for 2 hours, and once you get to London Ontario, head south for another 30 minutes, on the Wellington Road turnoff.

During the summer months of June, July, and August, the population increases, because the tourists invade this delightful lakeside town, especially for the beach. A Brief History of Port Stanley

A settlement named Kettle Creek was founded by Lieutenant-Colonel John Bostwick in 1812, where Port Stanley is located today. It was re-named Port Stanley in 1834, after the United Kingdom’s Prime Minister, Edward Smith-Stanley.

Lord Stanley, 16th Earl of Derby,  and Governor General of Canada, was an ice hockey enthusiast, and donor of the first Stanley Cup in 1893.

Believe it or not, in 1832, there was a ferry service between Port Stanley and Buffalo N. Y.

By 1833, Port Stanley had become known as one of the finest harbors on Lake Erie. Port Stanley’s harbour was large and sheltered, and operated by Transport Canada.

Trade in coal and wood between Southwestern Ontario and theUnited States was very popular. By the early 1900’s, Port Stanley became known as “The Coney Island of the Great Lakes”.

It had a large sandy beach with shallow waters for family swims, an incline railway to Picnic Hill (which overlooked the harbor), a casino, the international famous The Stork Club, an outdoor theatre, a Ferris wheel, and even a rollercoaster.

Mackies Orangeade and Fries were a great hit and in 2019, is still on the beach ready to serve.

Tourists came by boat, car, and  rail, from London, St. Thomas and surrounding area, to hear the big band sounds of Guy Lombardo and others at the extravagant Stork Club dance hall, which by the way, held approximately 3000 people dancing the night away. It burned to the ground on New Year’s Eve 1978/79.  An era of big bands was gone forever, but Port Stanley lived on.

Port Stanley’s Main Beach is a long beach, with a great stretch of sandy on Lake Erie’s north shore.  It is right in the centre of town.  Just cross the lift bridge and turn left.

Port Stanley’s Main Beach is one of a few in Canada to have earned the official Blue Flag because of its strict water quality and safety criteria.

This beach even has mats to make the beach more accessible to those who have a wheelchair or stroller.

Port Stanley’s Little Beach is another option.  Instead of crossing the lift bridge, drive straight ahead and park once you get close to the water.

Little Beach is seclude and protected by a cliff.

You won’t regret it.  Little Beach is 185 metres of heaven.  The water is perfect for family swimming.  Expect crowds on a hot summer day.

Jackson’s Fish Factory outlet is right there too, so don’t forget to purchase some fresh yellow perch.

Read our feature article, Things To See & Do In Port Dover, Ontario

Me and my family have been visiting Port Stanley for over 50 years. Our favourite strip of sand and water in Port Stanley is Erie Rest Beach. It is west of the Main Beach maybe 1 km or so.  Cross the life bridge, and drive through the village heading west. Drive halfway up Picnic Hill as you past the new subdivision, and then make a sudden sharp left turn down toward the water.

If you can’t find it, just stop and ask anyone.  The people in Port are very friendly and they might even share the directions to Erie Rest.  This beach is the gem of Port Stanley.

There is parking for about 20 vehicles, so arrive early especially on the weekends. ‘Erie Rest’ is about 250 meters wide and has a beautiful sand beach with waters dropping off gradually in the first 100 meters.

There are no lifeguards and facilities are limited to a portable washroom. It’s best suited for those hoping to find a beach that’s less busy than Main Beach on a hot sunny day.

Enjoy the warm shallow water but watch out for rip tides.  There is a sign on the beach that will explain what to do if a rip tip catches you.  The drift wood is very artistic.  The sand is soft.

The dunes and grasses might have fish flies which are harmless.  The kids don’t seem to mind.

Treasures are everywhere so bring a bucket, a towel, an umbrella, and of course, food and drinks, because there is no concession stand on Erie Rest.

Thousands of people walk the entire Port Stanley beach shoreline to soak in the beauty of the area.

It’s about a two kilometer walk from the east end of Main Beach to the cliffs at the end of the secluded sandy beach west of the Erie Rest Beach.

Things to do in Port Stanley If you like to hike and you are in fairly good shape, you will love this 41 km trail.  It is a Carolinian Forest experience of beauty.

The trail starts at the beach in Port Stanley, next to Mackie’s Restaurant.  Look for the two “Post People Hikers”.  Paid beach parking is in force in Port Stanley and rates and hours change frequently.

The main road to Port Stanley from the 401 highway or London Ontario is Hwy. 4.   If you don’t want to begin walking at the trail head in Port Stanley on the beach, there are many access points.

Just turn at any intersection along Hwy. 4 as you head south and head west a few miles.  You will see signs for the trail very soon.

Otherwise you could park at the Shaw’s Ice Cream Dairy, and begin the walk south.  Look for the blue markers.

The trail features a lake and is rated as moderate. The trail is primarily used for hiking, camping, and backpacking and is best used from May until October.

Due to the lack of government funding and volunteers, this trail could be a challenge for less “fit” people.  Beware, but enjoy! The Fisherman’s Memorial was established as a tribute to the fishermen and fisher ladies who suffered hardships while servicing their families and communities all over the Great Lakes.

Many people in the Great Lakes area have never seen a Lake Erie fish tug.  This display and information is a very sensitive topic for the locals of Port Stanley.

Model boats and other objects relating to the local fishery is very important to those who have memories of the Great Lakes fishing industry, and they want to celebrate this local history with others. A plaque was erected in 2002 to celebrate the Port Stanley harbour.  It was called Glover Park, and named after Ernie Glover (1898-1988), owner and manager of the well known Finlay Bed and Storage Company.

Mr. Glover dreamed of a park where people could sit and watch the activity in the busy harbour.  Ernie Glover donated monies for the park to be constructed.

Take time when visiting Port Stanley to sit in the park.  The lift bridge is also very close by.

Maybe you will also be lucky enough to be entertained by a live musician who often frequent the park on a warm summer day.

After a great day at Port Stanley Beach, on the road back to St. Thomas or London, you must stop a Shaw’s Ice Cream Dairy Bar for the best summer treat you can find anywhere in Southwestern Ontario Canada. The ice cream is wonderful and delicious and the selections are plenty.   Shaw has been doing this for over 70 years and they have found perfection!

See you next year!

We almost forgot!!  Hallowe’en in Port

On Valley Drive in Port Stanley’s west end, very near Erie Rest Beach, there is a house like no other, that is decorated for Hallowe’en.  It is especially wonderful after dark.

Not only is the entire yard outlandishly decorated with very scary creatures, but the owners show movies i.e. Ghostbusters.

On your way to Erie Rest Beach, check out the house.  You won’t be able to miss it.  Be prepared to stop awhile.  Your kids will love it.  Make it a yearly outing.

One local boy named Jack,  calls this house … “Stanley’s Graveyard”. Every day during the Hallowe’en season, the owner adds something new. Thanks for reading!  Have you been to Port Stanley yourself or with friends or family?  Let us know what you thought?  Did we miss anything exciting?  Take care!

Previous post: The Best, Nicest, and Most Beautiful Beaches In Costa Rica