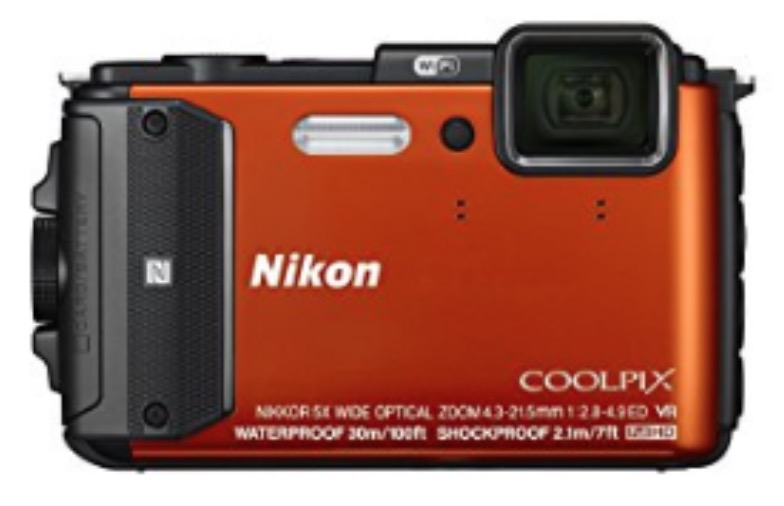 Coming in at #4 on our review list of best dive cameras available on the market was the Nikon Coolpix AW130.

This camera was one of the ‘sleepers’ that we found. We call it a sleeper because it doesn’t get the buzz that it probably should receive in the scuba diving community, but it is undoubtedly a very high-quality camera that is relatively cheap, given the wealth of features and capabilities that it possesses.

We were surprised to find such an underrated device, so we wanted to make sure that we informed you about its usefulness as soon as possible.

In terms of design, it looks much like what you would expect a normal camera to look like. Unlike #5 on our list, there are no crazy aesthetic additions on the camera that would surprise anyone, and that may be the reason that it is a ‘sleeper’. However, we do like the design of the camera. It comes with an orange-colored body, on the front panel.

The square containing the lens is a square, which is fairly unique. It is also placed on top of the camera rather than in the middle, as it is on many other cameras. The camera in its entirety appears to be a relatively light device, which is definitely a bonus for all divers.

This is where the camera really shines. We were surprised at how many different features this bad boy possesses.

If you’re looking for a really great ‘sleeper’ camera, that is not only inexpensive but extremely effective and impactful in its duties, then this may be the perfect device for you. It not only possesses all of the features of many other dive cameras, it also comes with the inclusion of Wi-Fi, GPS, and other pivotal capabilities that impress us.

What makes this dive camera even better, is the fact that the actual recording and photo capturing abilities on the device are superb as well. It takes pictures at a definition of 16 megapixels, and also records videos in 1080p.

Whether you’re a beginner, or someone who has been using dive cameras for a significant amount of time, the Nikon AW130 may be the perfect dive camera for you. With its cheap price and plethora of features, it presents itself as one of the best values on the market currently in 2017.