Namibia’s Skeleton Coast – The Land God Made In Anger 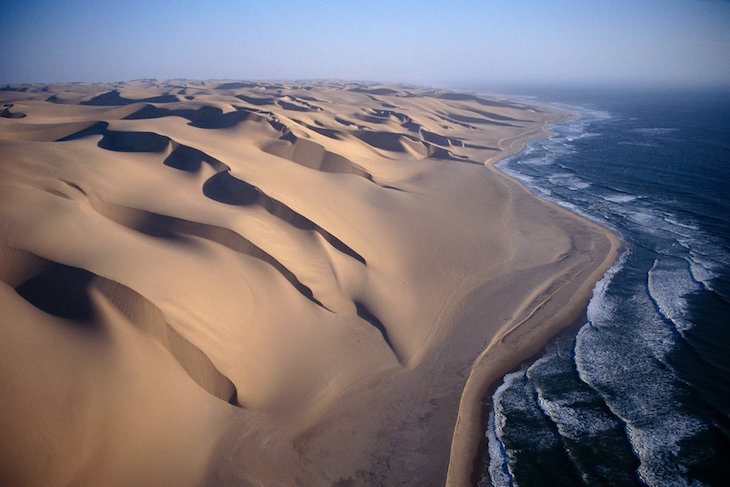 This location, where land meets sea in dramatic fashion, has been given many names, and none of them are particularly flattering.

Dubbed “The Land God Made In Anger” by the local natives, and the slightly off\-putting “Gates Of Hell” by Portuguese sailors in days of old, most people currently know this location in the country of Namibia by its most popular name – the Skeleton Coast.

If you are flying overhead from a nice, safe distance, you will see miles of pristine green-tinged surf connected to an endless vista of rolling desert, and you might think “Oh, how lovely!  Anyone for a picnic?”

But historically speaking, this area of the world has claimed the lives of many unfortunate sailors, whose ships have run ashore.

These are still there, relics rotting away along this mysterious, and dare we say beautiful coastline.

This is a place where the relatively colder waters of the Atlantic ocean, in the form of the Benguela Current, is brought to bare upon the scorching Namib desert, so not only do we get a sense of land vs water, we also get a sense of hot vs cold.

It is certainly striking to see the Skeleton Coast, and many of you traveling types reading this might say “Thanks, but no thanks!”, but there are those who are fascinated enough by this land, which is marked by a literal gate with skull and crossbones, to pass through these gates and into an area which is considered to be almost a reserve of sorts, in Southern Africa.

The Skeleton Coast, often conjures up images of shipwrecks, and whale bones, which can be found strewn about the coastline, giving this land its harsh reputation, which it seems to come by quite honestly.

Despite the stark beauty presented here, there has been much death, as both man and beast are sometimes no match for the conditions here.

Sailors have been known to scribble morbid notes behind (eg. “I’m heading north to look for food…”) as they trudge off into the desert to meet their almost certain end.

You might think that no one would dare go near the Skeleton Coast, but this is strangely not the case.

As brutal as it is, this is actually a destination for surfers, due to the fact that this place is indeed one of the most unspoiled coasts in the world.

Every day, new surfers find out about this spot, grab their boards, and make it their mission to get there.

In fact, the conditions for surfing – specifically at a place called Skeleton Bay, a.k.a. Donkey’s Bay – are quite ideal, if you aren’t adverse to a bit of danger.

The nature of the sand beneath the waves, in combination with the water and air temperature, creates some of the longest, most powerful tubes in the world, which can only be surfed by some of the most skilled surfers.

It isn’t at all shocking that the Skeleton Coast offers such waves, and it is, as untamed an environment, as you can expect to find anywhere on earth.

In fact, there have been many pilgrimages in recent years to the Skeleton Coast, just to experience these “special” waves.

We hesitate to say that this has become a “popular” surf spot, but in recent years it has definitely become a very exclusive surf destination, made even more exclusive by the fact that the region has its share of diamond mine operations, which discourages travel to some parts of the region.

Still, if you are a surfer, and you can get to that coastline, you might get to experience something similar to the kinds of waves ridden by Koa Smith, pro surfer.

Check these Skeleton Bay / Donkey’s Bay surf videos out and you’ll see what we mean!

If you ever wanted to “get away from it all”, the Skeleton Coast is certainly a place that can fulfill that proposition in spades.

There are also safaris offered by those who have taken it upon themselves to adapt to the sometimes cruel conditions here, since of course, there is life here, and some of it is surprising, and worth a look, if you are truly that adventurous.

Geographically speaking, the Skeleton Coast is a territory which stretches from the city of Swakopmund all the way to the Angolan border, located in the Namibian northwest, and encompasses roughly 2 million hectares of sand dunes and gravel plains, plus about 500 kilometers of untouched shoreline.

Within these borders is a National Park, which has rivers such as the Ugab, Hoanib, and Kunene as its borders.

Here is a video showing the Ugab river in full flash flood mode.

For your information, one does not simply pay a friendly visit to the Skeleton Coast.

In order to gain access, a traveler must be lucky enough to be permitted along with the some 800 individuals a year, who are allowed to take day trips to this region, as the park is still considered to be fragile and something to be preserved.

Don’t expect to see any Starbucks or McDonalds opening up along the Skeleton Coast any time soon.

Indeed, if you want to visit the skeleton coast, you must join a safari and be flown in, which is going to cost you a bit – around $6000 per person to get you in for 4 days.

Don’t quote us on this, of course – we are not offering these excursions, but this should give you a ballpark figure.

To reach the sea, you might be taken by a personal guide for a trip through the dunes, which might go for 200-some-odd clicks, in order to reach the sea.

You will be treated to a bevy of fallen colossuses, including rib cages, grounded ships, tusks, dead seals, and whale bones bleaching in the sunlight – oh, and lets not forget human remains! Most certainly, these guides know where they’re going, and many are intimately connected to this area, and know every curve of every dune.

To make a ghastly comparison, you might find that going on a trip like this, is like taking a trip around Hollywood by bus to see the homes of famous people, except you’re not in Hollywood here, you’re jetting through the desert, and surrounded by a fair amount of desolation.

One of the main attractions of such a trip is to see the old British liner, the Dunedin Star, beached there since the 40’s, and looking mighty abandoned as the winds blow through it.

There was even a rescue attempt at the time, and it too failed. This failed ‘fight for life’ is frozen in time, and you can apparently still see the rescuers boat at well when the waves are just right.

A safari here is not all morbid fascinations. There is a large faction of seals to say hello to, and their smell might reach you before you hear their deafening social interactions.

Once you reach the seals, you will no doubt be enchanted by their lively antics, as you realize you have come to the seal equivalent of a giant Roman-style bathhouse for stinky sea animals.

Seals are not the only life to see on the Skeleton coasts.  If you are very lucky, you might see an elephant sliding down the dunes for fun, which has been rumored to happen once in a while.

There are also things like the endangered rhinos inhabiting Namibia, and you most definitely catch sight of crabs as they skitter around the beach, terns who are oblivious to the nasty reputation of this land, and even the odd jackal who might cavort alongside your dune buggy, hoping perhaps you didn’t bring any supplies, so they can gnaw on your elbow.

Who offers skeleton coast safaris?  Here are a few options…

Generally speaking, wildlife in Namibia spends a lot of time conserving energy, and trying to survive.

The aforementioned jackals are not above licking stones for moisture, and beetles manage to channel drops of water on their back, and suck it into their mouths.

Other beetles known as Tok-tokkie take turns piggybacking, using one another as umbrellas.

Something you will no doubt witness, if you spend any time on the Skeleton Coast are the famous “roaring dunes”.

These dunes have the effect of a low-flying plane, as air gets caught between the granules, and has the cumulative effect of a formidable rumble of noise.

One thing we have yet to mention about the Skeleton Coast is humans. Live ones, at least.

They are there, too, and they have adapted much like the other wildlife here, and call this land home.

If you are a tourist, and open to visit with some of the locals, you may get a chance to meet them.

Maybe after reading all of this, you may see the Skeleton Coast as an adventure destination for you in the future after all.

While parts of the land can be quite inhospitable at times, Namibia is not quite as isolated as it might appear, with more and more people seeing the stark beauty of this harsh land.