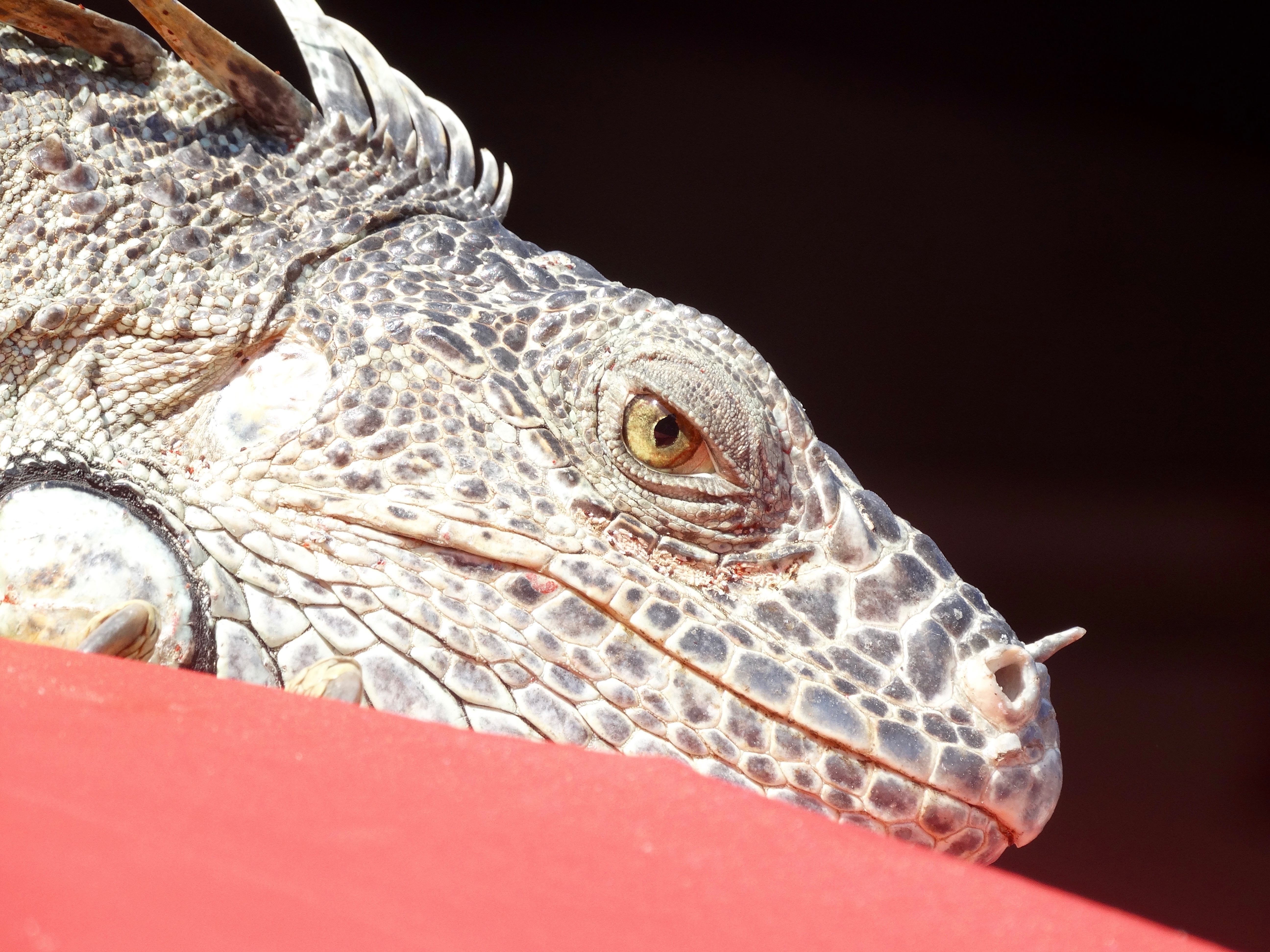 Spiny-tailed Green Iguanas at the Beach

People know me as Beach Baby Bob.  My wife and I travel all over the world learning about everything we can.  We never go anywhere without our camera, binoculars, iphone, and our laptop.

Today I want to tell you about what happened to us in Bucerias Mexico.  Bucerias Mexico is in the Mexican province or state of Jalisco, which is just a few miles up the Pacific coast from Puerto Vallarta Mexico, on the west side of the North American continent.

We usually stay in a small Mexican hotel called Ana Ruth’s, which is in the central part of Bucerias at the ocean’s edge.  There is a giant parrot tree (parota) beside the hotel, which is 5 storeys high, and we live on the roof.

Our apartment is mainly outdoors.  The bedroom and the bathroom are enclosed, but the rest of the apartment is open to the sun, the stars, and the sights and sounds of the Pacific Ocean.

There is a Mexican green iguana living somewhere close by.  He could be living in the parrot tree, which provides us with lots of shade, or maybe in the tropical plants that cover the back of the hotel.

I am not sure, but once in a while, he decides to sun himself, and he likes to relax on the top of our red umbrella.  That is exactly what happened today.

I should mention that green iguanas are diurnal and arboreal.  Diurnal means they are awake in the daytime and sleep at night, just like most humans, except for my son.  Arboreal means they love being up in the trees.

This particular Mexican Iguana lives with us, since we live in a tree house, sort of.  He is a little over 5 feet long.  Remember that half of his length is his tail.

He came out onto the top of our red umbrella around noon time today.  We were having our lunch under the umbrella.

The iguana, which we have named, Mr.Twyla Mae, was sitting in a funny position with one leg up slightly.  Maybe he was ready for a fast get-away.

He stayed in that position for over an hour.  He allowed us to get very close to him and take lots of pictures, and even make a video or two.

He did turn his head a little to watch what we were doing, and he rolled his eyes at us once or twice.  Otherwise, he was very quiet.

We were eating chicken for lunch.  I doubt if he cared, since green iguanas mainly eat fruit and vegetables.  There is a black iguana living closer to the water’s edge.  Black iguanas will eat just about everything humans eat.

After our lunch, we went for a walk on the beach, and when we returned to our penthouse apartment, Mr. Twyla Mae was gone.

He was probably down in the water swimming because it was a beautiful spring day in Bucerias Mexico, and iguanas like to be near water.  The temperature was 28 degrees celsius, and perfect for a refreshing dip.

Our resident green iguana is about as big as this iguana species gets, which is about 5 to 6 feet from head to tail, and weighs in at about 10 – 20 pounds.

He has the ability to change colors according to his environment.  He really doesn’t want you to notice him. He can remain very still, so you might mistake him for a tree branch.

He does have very long sharp claws and sharp teeth, so beware.  His teeth are hiding on the inside of his mouth.  They resemble leaves with serrated edges for tearing and ripping plants.

They are similar to the iguanodon dinosaurs’ teeth.  Maybe that’s why this animal is called an iguana.  I wouldn’t suggest you pick him up, unless you have a friendly relationship with him.

His muscular tail helps him move through the water quickly, and while on land, the iguana uses his tail as a weapon, if need be.  If you grab his tail, and he feels threatened, he could drop part of it off, to escape, but he will regenerate it.

The dewlap skin hanging from his chin, is there to control his temperature and to attract the ladies.

The spiny-tailed Mexican iguana’s eyes are very powerful!  They can see long distances, but in low light situations, their vision is poor, because they only have a few rod cells in their eyes.

On the other hand, they have special eye cells called “double cone cells”, giving them great color vision, and enabling them to see ultraviolet lights, which helps them absorb lots of vitamin D from the UVA and UVB rays from the sun.

They also have a primitive third eye on the top of their head, called the parietal eye.

The lens and the retina in this eye doesn’t work that well, so he doesn’t use it to see, but it is very sensitive to movement, and changes in light and dark situations.

The green iguana has a little horn on his nose.  Scientists think that maybe it was once a lot bigger, and used to scare predators away. Iguanas have sharp seated teeth, and if you get in their way or provoke them, they could bite you.  They do give off signs before they bite, so beware of the following …

They really don’t want to tangle with you, because that uses up a lot of their energy.  They would much rather save that energy for mating.  If they do bite, go to the hospital and tell the doctor what happened.

Let’s end off this story about Mr. Twyla Mae (green iguana living in our penthouse in Mexico with us) by talking about their poop and pee.

Since they eat a lot of veggies, and little meat (maybe a bug now and then), they consume more minerals than they need like potassium, nitrogen, and sodium chloride.

As a result, they have a lateral nasal gland that they use to get rid of the excess minerals.  I guess you could say that they pee out of their nose, but it isn’t liquid like our pee.  It is more gooey and paste-like.

They don’t make urine like we do.  However, they do poop like we do.  If they eat well and exercise, they could defecate once a day.

They also do get constipated and get diarrhea, but that depends on their overall health – just like people.  Hopefully, no people will cage them, and try to make them into house pets.

Until We Meet Again

I am sure that my wife and I will have the privilege of taking lots of photos and videos of Mr. Twyla Mae over the next few weeks, while we live in this tropical paradise, because the weather is getting warmer, and iguanas love the heat.

February and March is considered spring here in Mexico.

Previous post: Bird Migration Fall-Out – Where And When To Spot Vagrants