Madagh Beach – Things To Do In Oran, Algeria 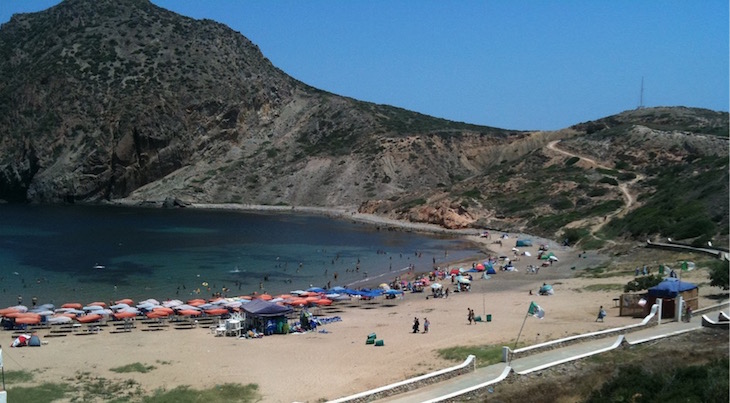 The second biggest city in Algeria, after Algiers, is Oran.

Oran is a port city with over a million people living in and around the area. It is renowned for its vibrant culture and history. Still, the various conflicts that have taken place here over years and years, are still quite evident in some of the ruined architecture.

Oran was always the prized object of many struggles over the centuries between various nations, who fought each other to win her for themselves.

They say each time a ship heads northward to Europe, there is always an audience there to wish them luck in their new life, which many people consider to be a better life in some ways. One famous resident, who managed to find fame and fortune after leaving Oran, was Yves Saint Laurent, the world famous fashion designer.

Another famous person who resided there for a time was Albert Camus, who used Oran as a backdrop for his book,” The Plague”. According to him, Oran was a bit of a dustbowl.

Regardless of what Camus thought, Oran still manages to captivate the imaginations of travellers, and draws people to its shores to this day.

Indeed, it is culturally rich, and has a variety of accommodations for travellers, including five-star luxury hotels.

Here is a video of a helicopter flying over Oran to give you the full perspective.  🙂

As you can see, there is an Oran that looks fairly laid back, while having a history to make it “epic” you might say.

In addition, Oran was also responsible for creating the music movement called “rai”, which has been subject to some controversy over the years, for its supposedly debauched ways.

Like a hidden jewel, there is a small, somewhat secluded bay called Madagh Beach, located west of central Oran, which is a destination for both longtime residents and tourists alike.

Here you will often find a colorful palazzo of beach-goers, who are all “set-up” on the beach in their multi-colored tents, looking out to the deep blue waters of the Alboran Sea, surrounded by rocky hills with scrubby trees on them.

Here is a video showing what we mean about Madagh Beach being one of the worlds very special hidden beaches.

Of course, those who live in Oran and surrounding areas, are well aware of this beach, but, to the world at large, this is still a hidden gem.

Upon closer inspection, you can see the waves lapping the shoreline, and perhaps, you can imagine spending a relaxing day or two there.

The water is quite inviting, and you will feel like you have discovered a secret place, if you come on the right day when few people are there to share the bay with you.

Madagh Beach is the perfect place to soak up the sun if you are visiting the interesting sights of Oran.

Madagh Beach is roughly a one hour drive away.

It is the perfect day trip getaway, if you are hanging out in Oran, and we highly recommend you experience it.

This beach is perfect for boating, water-skiing, swimming, or anything else water-related.

Of course, you’d need access to  equipment to do some of these activities, and the chances of you renting them there – well, let’s just say there are no guarantees!

Although there are few amenities at Madagh Beach, this beautiful hidden gem should not be missed.

But pack a lunch, because it is somewhat secluded, and there are no french fry stands!

Next post: We Review The 5 Best Floating Island Rafts For Summer Fun!

Previous post: The Dalmatian Islands – Where Time Is But A Formality