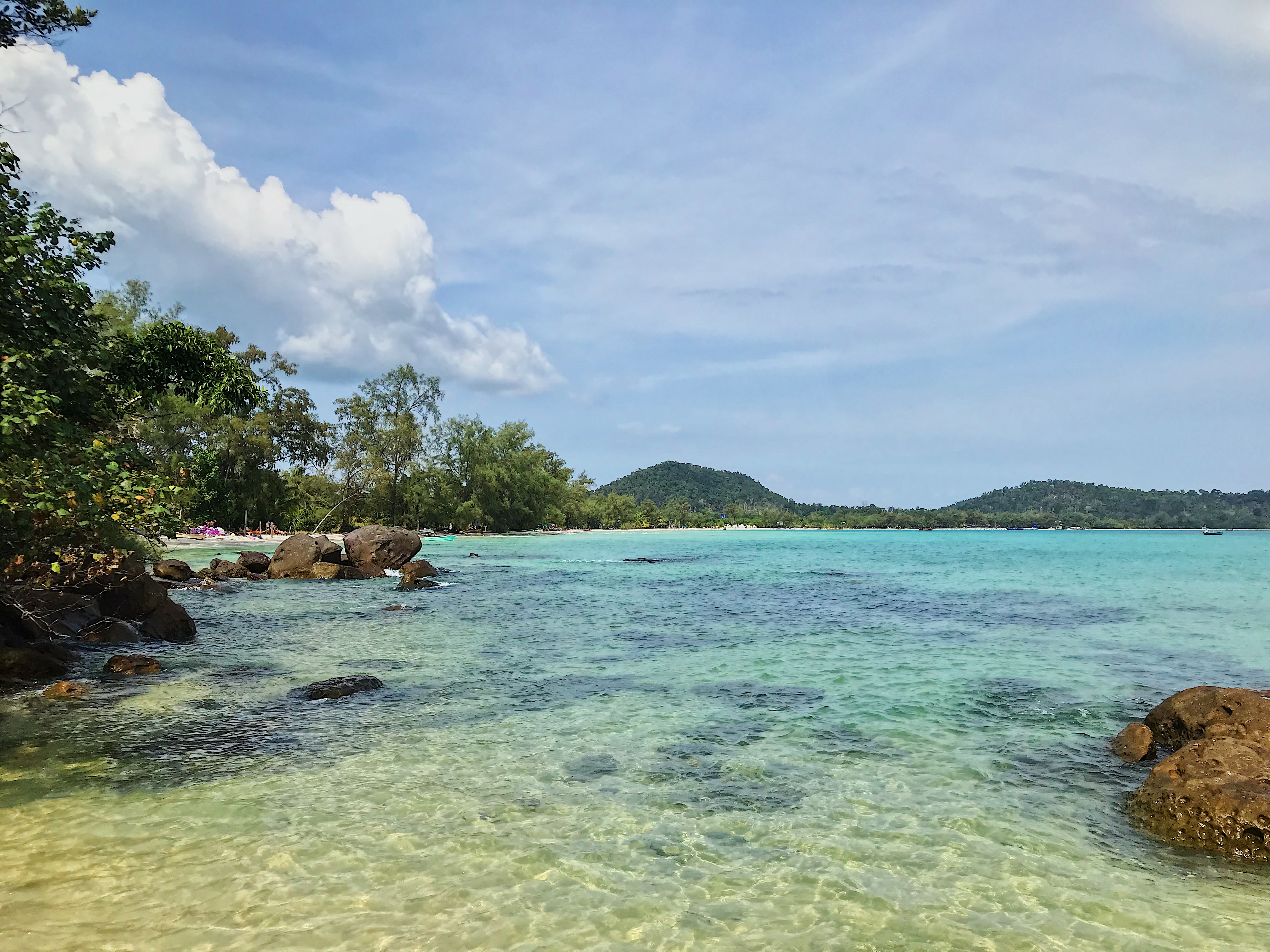 Few of them hidden in the wonderful paradise islands of Koh Rong and Koh Rong Samloem.

Located in the south of the country just a few kilometres ashore of Sihanoukville, Koh Rong is an undeveloped island surrounded by breathtaking beaches.

Originally uninhabited until quite recently, tourism only began here in 2012 with the first guesthouse established on the island.

A perfect spot to get lost that mixes traditional local customs with exorbitant parties full of young western backpackers.

Placed just a short walk away from Koh Touch, the main tourist town on the island where most ferries will drop you off, a marvellous beach stretches for almost 3 kilometres.

Known as Longset Beach or 4K beach depending who you are talking to, this is an undeveloped beach that combines just a few hostels with pristine waters and flawless nature.

Named after a farmer who used to grow cashew, mango and coconut trees behind the beach, Longset Beach is divided in two by a river.

Lots to Do at 4km (Longset) Beach

Exciting excursions into the jungle, relaxing walks along the beach, endless parties or perhaps paddling the day away by renting a kayak to visit the small island in front of the beach, or up the river to explore the mangrove lagoon behind the beach, the to-do list in Longset Beach is long and varied.

On the downside, the south-eastern view from the beach means that you don’t get a direct view of the island’s amazing sunsets, but many get up early or stay awake for a vibrant sunrise session from this side of the island.

Additionally, once the sun has set, it is possible to witness the enticing bio-luminescent plankton.

Instead of gazing up at the stars you can just look down at your feet as you splash around in the water and watch as it lights up around you!

Paradise on earth, this stunning beach hosts a few hostels and restaurants, where western and Khmer staff work side by side to bring the best time to those who visit, and a couple of small Khmer camps, where locals provide basic services to visitors or wait until a job offer appears.

But this peaceful synergy between locals and visitors is about to change.

Sitting on the shores of Longset beach you can often see storms brewing over Sihanoukville in the distance, and that’s not the only thing that is brewing over the skyscrapers of the city.

Casinos, flashing neon lights and Chinese-run construction projects, the once sleepy-city of Sihanoukville has now become a focal point of Chinese investment, causing a tremendous rise in the Chinese population in the last couple of years, and plans show it may slowly spread to suffocate the island of Koh Rong, too.

While it might seem like a good economical impact for the city on the surface, underneath there is a deeper, darker truth.

The arrival of the Chinese, who already make up 20% of Sihanoukville’s population, has meant a rise of general prices, an increase of crime rates and locals fleeing back to their villages as they can not longer afford city life there.

Rather than adding to local economies, the Chinese residents buy from Chinese business and restaurants, eating their own food and staying in their bubble.

Landlords will choose to rent buildings and land to Chinese as they will pay more, which means that locals and even Westerners are pushed away.

Just this year we have seen the destruction of the front line of beach businesses on Serendipity Beach to make way for the construction of a casino, a scary foreshadowing of what may begin to happen on the shores of our paradise islands, just 25 kilometres away.

With four casinos, more resorts and even an airport already in the agenda to be built in the next few years, the future of this undeveloped island and this beach looks destined to change.

And what would this mean to Koh Rong and especially Longset Beach?

First of all, development. In an island where currently there is only one muddy inland road that connects two of the main towns, the arrival of the Chinese visitors would produce a huge rise in the number of investors.

As for Longset beach itself, there are already plans in the works for the coming year, namely, an area of development that will be known as “Pub Street” whose own name seems like an oxymoron considering the tranquil surroundings.

On one hand, the development will most likely end the peaceful vibes that surround Longset Beach, however the silver lining is that it will hopefully bring more employment for the struggling locals, most of who originally came here to escape the dire situation in Sihanoukville.

Thirty two plots of land with no height restriction are up for grabs which constructors will surely turn into guesthouses, bustling pubs and bars, and loud clubs.

Additionally, one of the four casinos that are already planned will be placed on this marvellous stretch of beach. You might now be thinking what is the point of a casino on a stunning deserted beach, and you are not alone in this thinking.

In fact many casinos in Cambodia act as more of a shop face and actually function mostly as an online venue.

Therefore, aside from pointlessly destroying an idilic beach, these casinos probably won’t add anything to Cambodian economy.

All these things combined have the potential to change the entire harmony of the beach.

While it will bring business and facilities to people that live in the area, it will also destroy the very concept that brought visitors to the beach to start with: a magical serene break from reality.

Instead of being a quiet, relaxing heaven, it will become just another crowded holiday destination like other island beaches all over South East Asia, and loose its magical and peaceful charm.

Next post: What are the Different Types of Sunscreen?