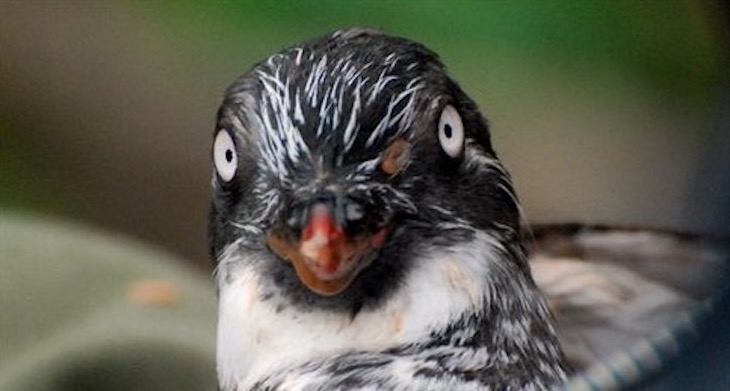 Out of the six types of auklets known to inhabit the regions of North America, here are two of the most populous species to keep an eye open for, around the coastlines and shores of the Pacific and Arctic.

Auklets are the smallest members of the family group of alcids, which also include puffins.

Similarly to puffins, many of them nest in burrows, or simply on the ground.

HABITAT:  SHORES AND OUT TO SEA, ROCKS, ISLANDS

BREEDING GROUND:  ALEUTIAN ISLANDS AND ISLANDS IN THE BERING SEA

This is the smallest member of the auk family, at under seven inches tall. It is no bigger than the common sparrow.

A colonial bird, which likes to both breed and fly in large numbers, the least auklet will breed in the Aleutian islands and other islands in the Bering Sea before wintering further down south.

They may be spotted in British Colombia or Washington, although some will opt to remain on the breeding ground all year round.

Around the world today, there are estimated to be about twenty million of these birds, nine million of which make their home in North America. So, happily, this species is not about to die out and is classed as being abundant.

However, the least auklet does still face some challenges. These are namely posed by rats and foxes which have been introduced to their colonies.

Feeding largely on a type of crustacean called calanoid copepods, this is a vociferous little bird which must consume almost 90% of their body mass per day, just to keep going.

In terms of mating, this species are classed as monogamous, which means something slightly different in ornithology than it does to us, this means they remain faithful, largely, to their partner, for as long as the breeding season lasts.

Although many birds do go back to the same mate time and again.

Breeding starts from three years of age and the breeding colors and plumage of this little bird make it highly notable.

Both sexes will wear white facial plumes and have a highly colored bill, as well as a ‘bill ornament’  for the duration of the season.

These are predominantly a dark gray bird, with some white and a sort of dappled underbelly. There can be quite some variants with the markings and plumage between individuals.

No nests are actually built on the breeding colony, but the egg – which is a single egg and the only one that a female will lay all year round – is simply laid on a rock, or soil.

Both parents then will dutifully incubate the egg for the required period of time (about 25 – 39 days depending). The same site for breeding (or the non existent ‘nest’) will be reused again for many years.

Once again, when the egg is hatched, both parents will bring food to the chick.

Least auklets are quick developers compared with other auklets and the young will generally leave the nest at around 25 to 33 days of being hatched.

Randy little birds, a pair of least auklets will have it away many time more than other species will, leading experts to conclude there is some kind of sperm competition going on (no, really).

After all, if only a single egg is laid per year, it makes sense that the best genetic material should get to it.

Male least auklets have the largest testis relative to its size of all its extended family members.

LOCATION:  ISLANDS OFF BRITISH COLOMBIA AND CALIFORNIA/ ALASKA TO MEXICO

A pelagic bird, this little creature will spend most of its time out at sea.

This is where it forages for food (mainly crustaceans but sometimes insects and other small seafood).

A colonial bird, which inhabits islands around the Pacific coast and range from Alaska to Mexico, it is thought that the northerly birds are the ones which migrate southwards, whereas the more southerly birds will be more likely to remain where they are all year around.

In 2014 a large number of dead Cassin’s auklets were discovered, washed up on the shores Northern California, reaching up to Washington State.

The cause of their death was something of a mystery, but once oil spills had been discounted (something like all seabirds that Cassin’s auklet are vulnerable to) the only conclusion to be drawn was that they had been a victim of a mass starvation caused by lack of food.

The blame for this was thought to be the unusually warm North Pacific, affecting the food chain and therefore depriving the Cassin’s auklet of their food supply.

Environmental and food chain issues are not their only problem.

Although these are not judged to be in any imminent danger as a whole, like the least auklet, Cassin’s auklet is also under threat from predators such as foxes, which have been introduced to breeding colonies.

This bird’s small stature does make it something of a target for prey, unfortunately.

A gregarious species, despite being fewer of them in the Alaskan islands than there once were, they are still abundant in other islands.

They will approach the colony under the cover of darkness, so as not to advertise their presence to their hunters.

One of the main colonies is on Triangle Island, off Vancouver Island’s Cape Scott, where there are thought to be around 55000 pairs of birds.

Nests are actually underground constructions, burrowed by the auklets themselves and do not consist of much additional material. This nest will subsequently reused many times.

Cassin’s auklet are unusual amongst alcids, because they will occasionally lay a second egg, in a separate clutch, within the same year.

The same pair will tend to reform in subsequent years and both parents take turns at both incubation and feeding of the chick. They are fed by regurgitation and they usually fledge after about 35 days in the nest.