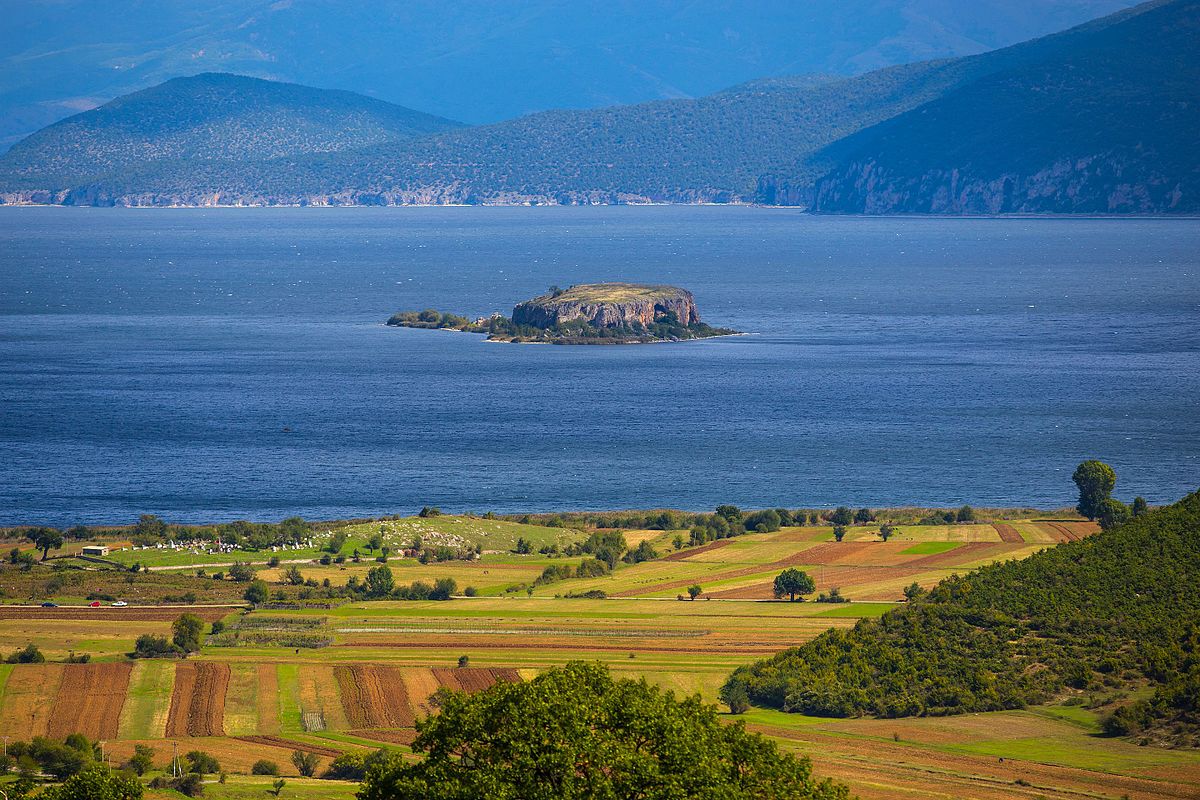 Yes, this interesting lake called Prespa and its incredible beaches is where we had opportunity to visit and which I’m now writing about is a natural border between 3 countries of mighty the Balkan peninsula.

This inland freshwater lake I will be discussing in this article is famous across the region, “Big Prespa Lake” which is just 1 lake of the Prespan basin, other is ‘’Small’’ Prespa which is more than half the size of Big Lake, hence the name.

Prespa is shared between 3 Balkan countries ‘’Big Prespa’’; ‘’Small Prespan lake’’ smaller in size, (and located at higher altitude) just like its name indicates, Small Prespa is only a natural border between Greece and Albania.

Lake Prespa’s surface is mostly in Macedonia, 190 km² to be exact, in Greece it stretches out for 84,8 km² and only 38,8 km² is in the Albanian territory.

It is one of the deeper lakes, in between its surface and bottom there are 54 meters. The largest city in the area is Resan and is located on the Macedonian side of the lake.

The climate is mountain climate also known as “alp climate”, so we recommend you go there at summer if you plan on bathing in this refreshing water.

Lake Ohrid and Big Prespa Lake are just 10 km apart, Prespa is 150 m higher than Lake Ohrid, and, because of it, Lake Prespa overflows to Ohrid through limestone tunnels that connect them.

Lake Prespa gets most of its water through underwater streams and above surface we can see few rivers from all three countries flow into it.

At the lake there are two uninhabited islands – Golem Grad in Macedonian side, and Mali Grad in Albanian side of the lake.

We have found out that Golem Grad would be an adrenaline-raising place for anyone who is afraid of snakes because it is literally filled with venomous serpents!

This is one of the main reasons for this beautiful island to never be inhabited by humans, but locals do dare to use the island during winter to herd sheep.

We fed our curiosity about this mystical island that reminded us of myth about Medusa, by stories told to us by locals, who as we noticed love talking about it, one of the stories being about a hermit monk Kalist who chose the dangerous island as a test of faith.

Kalist lived at the Golem Grad island alone for two years surrounded by snakes. He lived in a tree house built above the reach of deadly serpents and he would get down at ground only at night, brave he was we dare say.

Yours truly the beach baby herself and friends of mine, despite being offered a tour, a few of us suffer from unofficial Ophidiophobia, so it was a no go for the rest of the crew as well.

We found out that there are remains of old Serbian church from the period of Serbian Monarchy Nemanjici, that was restored in 1938, we felt bad we couldn’t see that due to our fears of snakes, as the description we have been given of the church was enchanting.

I did dig up a picture of the church, however.

The Prespa basin and lakes in it can be freely described as untouched nature, and it is officially a transnational park.

The area is sparsely populated, locals live off of tourism and fishing for the most part.  The odd person comes looking for the Lake Prespa Monster, but I can tell you I never saw it.

Beaches of pale gravel (and some beaches like the one in Dolno Dupeni area are sandy ones) contrasting deep blue color of the lake could trick you to think you are at the coast of any Mediterranean sea, in a more secluded area, and much colder climate.

At the end of September you can witness locals making their famous vines, and because they are so friendly you will probably be given a bottle or two for a memory, interesting custom practiced as we have noticed all over the Balkan’s.

If you are searching for pubs and clubs you should take a ride 10km in direction of Ohrid, as Prespa Lakes are not for those of you searching for that kind of entertainment

What they are perfect for is if you are looking for quiet picturesque places to relax at, soak in the sun and bathe in fresh water, and if you wish to learn something new about local history that offers insight in history of the world as it played important part in it.

Oh, and for those of you who would like to experience the snake island full of its slithering inhabitants….you can definitely experience an exciting area, but in a different kind of way.

Prespa Lake was a different experience for your beach baby crew, if we had to compare it to lakes Ohrid and Dojran, we could find so many similarities but also so many unique things and that is why we put it on our “would like to return to” list.

Lake Prespa lit up our imagination, it fed our curiosity for history, it raised our adrenaline yet we got the chance to relax there, to enjoy local culture, get to know new people, get to know each other and oneself better.

Next post: What Is Seaweed and What Is It Used For?

Previous post: Can you get the HIV / AIDS virus from a swimming in a public pool?