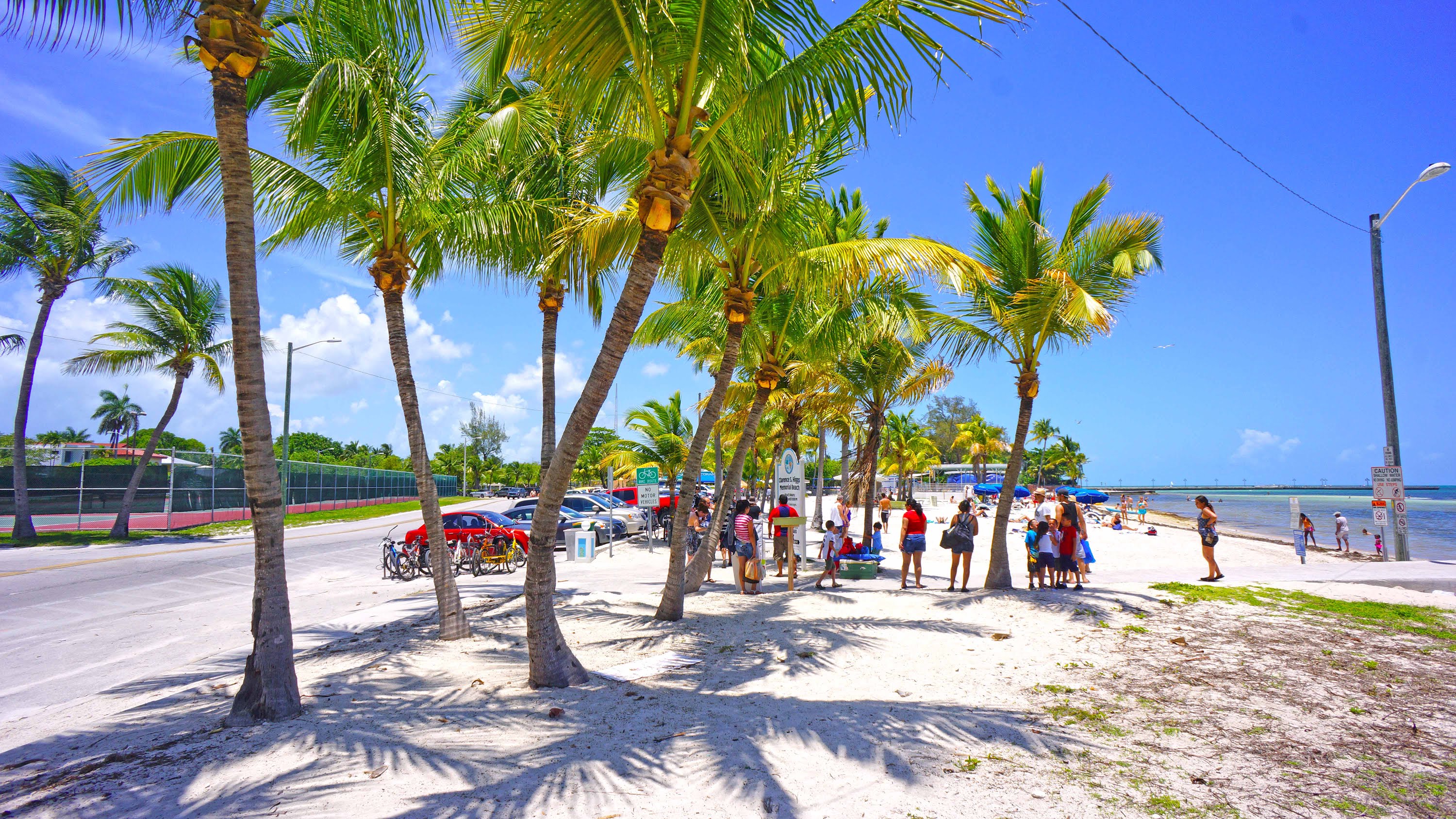 For those inclined to party, this paradise island has all that you could ever need; bars, clubs, booze cruises, strip clubs, drag shows, and constant live music.

Not to say you can’t lounge your little heart out.

If drunken karaoke and acoustic Bon Jovi covers aren’t your cup of tea, there are plenty of beaches to populate, and water sports galore.

There are many chartered trips, certification opportunities, and great dive sites to explore on the island.

It can take a bit of effort to make the beach a priority on Key West.

There are a few nice ones located right on Key West proper, but they aren’t quite the pristine slices of paradise you might expect.

The real gems will require a bit of driving.

That said, here are the Key West beaches that you can access by foot, bike, or moped (a very popular mode of transportation on the island):

It’s family friendly, and perfect for those of us who like to lay our towels down on a patch of grass beneath a shady tree, while remaining a stone’s throw from the water.

Smathers Beach can be perfectly tranquil and serene, with its wide beachfront, swimmable stretches of ocean (not always a guarantee on KW beaches), and the occasional shady palm.

But catch it during spring break, and you’ll be subject to all manner of day-drinking shenanigans, boomboxes, beer pong, and misfired frisbees.

Time it right and it’s where the party’s at, if you’re under 25, or into that kind of thing.

When peak season subsides, this beach becomes a jewel again.

Higgs Beach is more of a low-key offering.

It’s family friendly, and while a bit rocky by the water’s edge, has a great long pier, perfect for birdwatching, diving, and dipping.

Put this at the top of your list if you plan to bathe or bronze in Key West and don’t have a vehicle at your disposal.

A well-kept nature conservatory is an added bonus at the back end of this beach.

Bahia Honda State Park is less than an hour drive north of Key West on US Highway 1, and is worth every minute of the ride.

You’ll have no problem carving out your own little private patch of beach, if you’re willing to put in a short walk.

If you have the means, this is far and away the best beach near Key West.

Key West’s reefs can be accessed a mere 3 feet offshore, and are ideal for DIY snorkeling, but deeper wreck and reef dives will require boat rides.

Some of the nicest fish and coral reefs in the Florida Keys can be found about 45 feet down on the outer reefs.

There are numerous wreck dives to explore off Key West, even at night. Here are a few of our favorites:

The Vanderburg is a ship 520 feet in length, located 7 miles off the shore of Key West, and 100 feet down.

It was intentionally sunk in 2012 for the purpose of creating an artificial reef.

When she still rode the choppy seas, the Vanderburg served as a World War II troop transport, and later as a Cold War missile tracker.

Dives to the site explore her deck, its satellite dishes, com rooms, and more, in what is now considered the largest and most accessible artificial reef in the world.

The Cayman Salvage Master was sunk in 1985, and plays home to goliath groupers and moray eels.

This dive often comes paired with a shallow reef.

Joe’s Tug is a beat-up old wreck, and is a popular hangout for eel and other diver-friendly fish.

Not to mention it’s nestled among some beautiful, you guessed it, coral reefs.

Do your research before finding a snorkel or diving tour.

With so much steady tourism, there are plenty of options and package deals available.

The Duval Crawl & Beyond

Duval Street is Key West’s version of Bourbon Street.  This mile-long stretch of debauchery, knicknacks, and eateries plays host to the majority of the island’s antics.

Certainly not for the faint of heart, not for children.  But that doesn’t seem to stop some folks.

Make sure to check out the famous Captain Tony’s for a bit of music, drink, and local history.

The Green Parrot is an absolute staple, and a local favorite.

Located just a couple of blocks off Duval Street, the crowd is a bit less touristy and a bit more eclectic.

Key West locals are known for their off-the-grid mindset.

And while the Parrot is a jumping party spot, it’s got more than enough charm and atmosphere to create friendly conversation between the regulars and the out-of-towners.

It’s been around since the 1800’s, and hosts live music nearly every night of the month.

Travel here at your own risk.

You might end up on the clothing optional rooftop at Garden of Eden, or wedged between bachelorette parties screaming their lungs out at Irish Kevin’s.

Whether you’re soaking up the sun and sea, or lifting a glass with the masses downtown, be sure to drink a few glasses of water with your morning

Cuban coffee. You’re not going to want to miss a minute of the action when you’re in Key West.