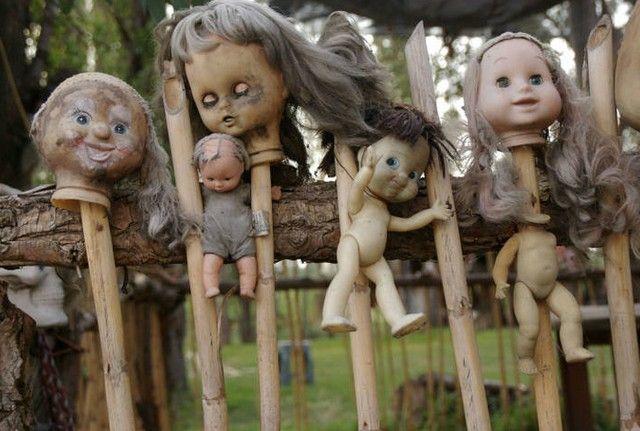 Most people, when they think of an “island getaway”, think of relaxation and tranquil beauty.

Perhaps you’ve found your way to paradise, complete with grass huts by the sea, a floating bar, full room service, and your sweetheart by your side.  Aww…

Maybe you take a stroll down some sandy dunes and end the day, sipping a pina colada watching the sun sink below the horizon.

Ah, life doesn’t get much better than this, does it?

Actually, maybe that was just a dream and you wake up and see this instead…

Not much, just a bunch of old creepy dolls hanging off of trees in some deserted-looking rural area.  And that, my friend, is because you’ve found your way to…

Isla de las Munecas – The Island of the Dolls

South of Mexico City, there is a small island that is located somewhere in the Xochimilco Canals.

This island is known as the “Island of the Dolls.”

The island is covered in all sorts of scary-looking, decomposing dolls, looking quite unsettling.  Hope you don’t have any kind of pediophobia (fear of dolls).

Some of the dolls are headless, some are JUST heads, and then there are arms, legs, and all sorts of body parts everywhere.  It’s all fairly grotesque, and, on top of that, it’s said to be haunted.

Of course, any skeptic is going to say “No, it’s not!” to the suggestion that maybe there are ghosts here, but we challenge that person to stay there overnight.

These dolls are really, really, old, and some are tied to trees, some are hanging from wires or off of fences, and some are tossed on the ground and left to rot.  Some are smiling, some staring, some laughing…yes, lovely.

It’s terrifying during the day, and not too many people stick around to see what happens at night, but there are lots of rumours of what happens…

Believe it or not, some people want to actually go visit the Isla de las Munecas.  Wow, good for you!

….but it’s not that simple.  The entire island might be closed off, for various reasons.

If you’re dying to go there, just know that most locals aren’t that interested in going there (are you shocked?), and you basically have to bribe someone to take you there, if that’s even possible.

In any case, the way to get there is via the system of canals that exists there.

Xochimilco, aka “The Venice of Mexico”, is a suburb of Mexico City located 45 minutes south, known for it’s entertaining boat rides along the canals.

Tourists just love this spot, as it is full of food, music, and the famous “Floating Gardens”.

Here’s a little video showing how fun it can be to visit these canals.

Ah, such a nice, colourful place!  It’s clear why people love these canals.

But guess what is also located in these canals?  Yes, as we mentioned before – the good old Island of the Dolls.  This cursed place also requires you to travel the canals to get there.

Like we said, in order to visit the island, you first need to find a boat that is willing to go there, and you will have to head off the beaten track to find this island, heading into more uncharted territory.

As beautiful as these canals can be, if you are heading for the Island of the Dolls, let’s just say that the “vibe” starts to change as you go deeper into the canals.

Still contemplating visiting a cursed island covered in hundreds of old cursed dolls?  Hold on, there’s more to tell you before you get your bribe money out and want to start wandering the canals.

We must now answer the obvious question – What’s with all of these dolls?  What’s the story here?

It is said that this island is dedicated to the lost soul of a pitiful little girl, who one day helplessly met her doom by drowning.

There was a caretaker of the island, named Don Julian Santana Barrera, who tried to save the little girl from drowning but failed.

According to the legend, the caretaker discovered a doll floating in the water where the girl drowned and hung it to a nearby tree out of respect.

Apparently, over the years, he continued to feel guilt for not saving the girl, and was compelled to hang more dolls around the island, hoping to calm his own spirit, but it never worked.

He just continued to cover the island in more dolls, because he felt he had to.  Like, HAD TO.

Now, remember, this is just an island in the rural backwaters of Mexico City.  Basically like an island in the middle of a bayou, but a little more picturesque.  Still, no one was trying go to there back when this guy was hanging all these dolls around, and it never really gained in popularity.

Some natives lived there, and that was it.  It was just a “normal” village, except now covered with strange dolls.

But then, creepy things started to happen, like supposedly the dolls started to move and sometimes could be heard whispering to each other at night.

It’s worth mentioning, at this point, that in Mexico, there are many odd superstitions that revolve around voodoo and also dolls.

Watch this clip, for example, to see a rather creepy doll that some people treat like a real child.

So anyway, eventually the man who was looking after the island died…in the same place that the girl died.  And no one knew exactly why he died.  Mmmm ok.

If you are still psyched to visit the island, which, by the way, has its own website, you can go right ahead and bribe yourself a guide to take you there by boat.

Except for one thing…there is more than one of these islands – a real one and a fake one.

So, even if you do pay some guide to take you there, you might end up at the fake one, which was made to look real just to get money out of stupid tourists looking for an island of cursed dolls in the middle of what essentially is a swamp.

And you know that website we mentioned – this one here – well, this could be a website for the fake island – we’re not even sure!

Not deterred yet?  Still want to hang out with the haunted dolls and the spirit of a girl who drowned over fifty years ago?

Well, the reward you might receive, if you do manage to get to the REAL Island of the Dolls, is to be surrounded by a bunch of old rotting dolls, which may or may not be possessed.

Let us know if you happen to make it there and then make it back alive.  If you do, share a comment and let us know … did you stay the night?  Did you see anything strange?  We can’t wait to hear from you!

In the meantime, here is a 2 part documentary by a man that visited the island himself, when it was a little more accessible.

Next post: Rooftop Tents – The Top Most Asked Questions