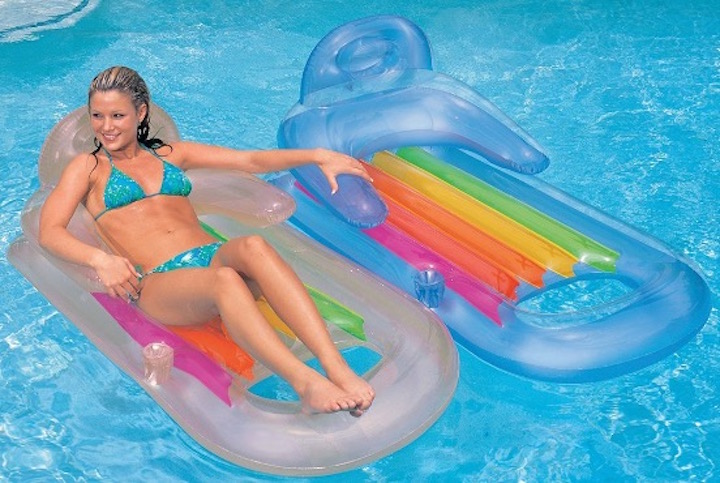 Sometimes, you just want something to like, you know, lounge on. Something that you can just park your ass on and float merrily along, without any sort of fuss or complication.

You don’t want it to be gigantic, cost the earth, or take some kind of wind tunnel to inflate.

Maybe, you don’t even really want to be sailing aboard a comedy neon pink flamingo (although what’s not to like there!) because, meh, whatever.

What you really just want is something cheap and cheerful, that does what it says on the tin and comes at a price that you can happily pick up a couple, and still afford to eat that week.

Better still, if it’s priced under ten dollars and you don’t have to fret about popping it, or overly panic about whether your toddler/dog/drunken buddies are going to wreck it on a first outing, because you can afford to buy a couple of spares.

If this sounds like you, then Beach Baby thinks you could do a lot worse than this bargain basement staple from Intex.

For some inexplicable reason, despite being a hugely popular best seller, Beach Baby could not find this particular lounger on their website.

Perhaps it is not a current model, but the good news is, it is still widely available, and most importantly, for those of you who want to internet shop, Amazon has still got these in stock.

(Although it might be an idea to get in pretty quickly, if they aren’t possibly being made any longer by Intex).

SO WHAT IS THIS?

This is a traditional pool float lounger, from the good old days.

Measuring 63 inches by 33.5 inches, this is marketed as being a float “for kids” but, happily, it is just as accommodating for adults as children.

Beach Baby is not quite sure at the insistence that this is just for children, particularly.

Plenty of large sized adults in the 200-250 pound range have happily attested to getting aboard, and staying afloat on this inflatable.  So this sounds sturdy and firm to us.

However a minority of users have experienced problems, being on the larger end of the scale.

To be fair to Intex, since this is supposed to be for kids, it probably gives them a free pass on this detail.

So perhaps, if you are a little bigger, there might be better floats out there. But, hey, for the price, it’s worth a punt, because chances are, it will be fine.

One of the main selling points of this inflatable lounge is the drink holder.

Not all floating rafts have them, and this one is good and handy, and capable of holding all your sodas and beers, while you’re out in the pool where the water will help keep them good and cool.

Another popular feature is the hole in the raft. This is so you can dangle your tootsies in the water as you glide along.

This is a good idea for anyone who actually might deign to get themselves a bit wet while out in the pool – a radical suggestion, we know!

Not everyone wishes to bake themselves to death in the burning sun. Some actually like to splash around a bit.

We all know how hot and sweaty PVC can feel against the skin (stop smirking), and so it’s nice to get a bit wet sometimes, and cool it all down.

The thing to remember is, that this is primarily a floatation aide, rather than an actual vessel to travel upon. Really, it is meant to help you swim better.

A few of the less flattering reviews seem to have failed to grasp this finer point, complaining that the water line is a bit close to their drink and that they get kind of…wet…in water…well…it is going to happen!

This is really meant to be hand paddled, and basically used as a swimming aide, rather than something that will keep you dry. Just be aware.

SO WHERE CAN I USE THIS?

There may be many people who have successfully taken this out on the pond, lake, open sea and even river.

It may be possible to do so safely, although, we would say definitely wear a life support device if you are going to be taking it anywhere beyond your depth.

Remember our point about this being primarily a swimming aide.  If you feel that this is a place where you would have a hard time swimming, then don’t take this float there.

In all honesty, Beach Baby feels that this is one pool toy that really is best confined to the domestic – or municipal – swimming pool.

Yes, there are plenty of customers who have managed to take this onto the lake etc, but there are also a few words of warning about punctures developing and the lounge sinking quickly.

This is not intended as a criticism of the product, more a realistic heads up as to what it is intended for – fun in the sun and loafing in your back yard pool – yes.

White water rafting down the river Nile?  No.

BOBBING ALONG OR BLOW OUT?

So what is our overall verdict on the Intex King Cool Inflatable Lounge?

All in all, we think that this is a simple and unpretentious float. It pumps up nice and easy (you’ll need some kind of pump though, don’t try blowing it, for heaven’s sake) and doesn’t cost the earth.

At this price you can afford a whole fleet of them, and won’t worry too much about them getting damaged.

But be realistic.  At less than ten dollars a piece, these ain’t gonna last forever.

The good news is, that these do come with a repair kit, which many have found pretty handy.

However, this floating lounge is not the most durable creation ever, so be prepared for some loss of air (you will need to maintain the air in them quite diligently) and also be mindful that really, these are just meant for fun, in the pool, and not some sort of adventure on the ocean waves.

If you bear this in mind, then you really can’t go too far wrong with one of these.