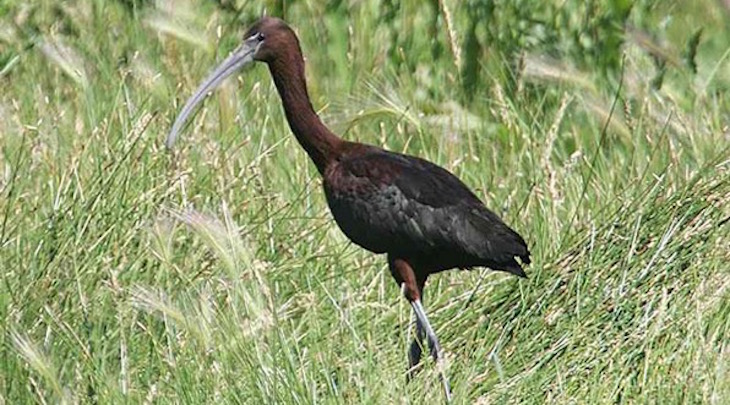 Famous from Egyptian history, the ibis (in this case it was the African sacred ibis) was associated with mathematics and writing.

In general, ibises have long bills which turns downwards, which they use in their quest for food (mainly crustaceans which they pick out of the mud).

In the Americas, there are several types of ibis that are native, and others that are visitors. Stay with us to find out more about these incredible birds. Here are five types of Ibises we are going to talk about today:

Ok, let’s get to it! We will start with White Ibis. Sometimes, the young white ibis may be confused with its relations, the scarlet ibis or the glossy ibis, although the juvenile glossy ibis is all brown colored without the white belly.

Scarlet ibises may be even more indistinguishable in their youth, the only identifiable differences being the bare skin on the scarlet ibis’s face. In North America, at least, you are more likely to spot a white ibis, than its elusive cousin, the scarlet ibis.

In terms of fidelity, the white ibis is generally classed as ‘monogamous’ – well, by ornithological standards anyway!

Quite possibly, not by human standards. To put it bluntly, the male ibises have a tendency to play away from the nest, and one study found 6% of eggs were fertilized by another ‘daddy’.

This is a sociable species that enjoy living in close proximity to their flock, and do things in great numbers.

They forage in shallow waters, waving their heads from side to side, performing a kind of ‘sweep’ of the area.

White ibises are not above stealing food from each other when circumstances necessitate it, or the opportunity simply presents itself!

Capable of performing some interesting aeronautical maneuvers – even in quite large flock formations – the white ibis may descend from great heights to their colonies, or foraging destinations.

Both parents are vital in the upbringing of their offspring, and the male guards the nest extremely vigilantly from both predatory attacks (from, amongst other things, other ibises) and the female from the aforementioned possibility of copulation with another male.

Eggs are laid about five days after copulation has occurred, and they are usually laid on an every other day basis, until the clutch is complete.

There are about three to five eggs typically, and the father is actively involved in the feeding.

After their first initial foray into the world at about two weeks of age, fledglings may depart the colonies as early as forty days old.

This is possibly later, if long flights over the sea are required.

Next, we move on to Glossy Ibis. Largely a quiet creature, this bird only really makes quite low grunting noises to announce its presence to the world, so you may have to be very silent to hear one!

This medium sized ibis’s favored habitations are swamps, reservoirs, flooded fields and so on. Their nests tend to stand about three feet above water levels, and are usually in vegetation, bushes, or small trees.

Diet wise, this species more or less will take what it can get, whether it’s crustaceans, or aquatic insects like dragonflies, damselflies and grasshoppers.

If they can, they will also take mollusks and small fish.

When in their breeding glad rags, these are quite a colorful sight, with their reddish brown bodies and bottle green wings.

Their faces are dark in color, and have a bluish border below and above, that is grayish when not in breeding season, but brighter when they are.

Their legs are a red brown, and they make a very bright spectacle when in flight with their necks outstretched.

Unfortunately, the habitat of the glossy ibis is under threat, with the conservation status of their wetlands being a constant worry.

Drainage, and the increased salinity of the wetlands being the main concern, as well as some problems that are being caused by tropical plants.

Like the white ibis, both parents are hands on, and actively involved in the nesting, rearing and feeding of their young, although the females do slightly more of the incubation.

In other ways their trajectory is similar to other ibises.

Their clutch sizes are between one and five, they make their first tentative flight at around four or five weeks of age, having first stretched their legs initially at about fourteen days old.

A migratory bird, these head south pretty early on in the season, traveling in flocks.

Another one that can be frequently confused with a glossy ibis, if care is not taken.  The major difference between this and the glossy, is that the white faced ibis has red eyes, whereas the glossy’s eyes are dark colored. When it’s not in its breeding plumage, it is otherwise very similar in appearance, albeit slightly smaller in stature, and with feathers that have a tiny bit more warmth in them.

Breeding in a reddish brown suit, this bird has a light pink colored face that is flanked by white plumes, unlike the glossy ibis, which has a slightly bluer colored bare face, and no surrounding feathers.

Ulike the other ibises, the glossy ibis is endangered from threats to wetlands, although the actual species itself is listed as being of ‘least concern’.

The population is stable at an estimated 1.2 million in 2012. Similar to the other ibises, both parents are active participants in the nest building and rearing of the young. Fledglings will make their first flight at about four weeks of age.

Unlike some other wading birds, the white faced ibis does not seem to have any particular loyalty to the same colony or nesting site, with their chosen areas being largely dependent on the conditions that prevail.

Moving on! Next we talk about Giant Ibis. The Giant Ibis is the largest member of its family, as well as being the only member of its genus. Twice the size of the second largest species of Ibis, the Giant is just that – giant!

The species can be found in the lowlands, swamps, marshes, paddy fields, and wooded plains. They are also often found along large rivers and lakes.

The Giant Ibis also have long, curved beaks which they use for foraging in shallow waters and between vegetation. They usually feed on a variety of invertebrates, crustaceans, small amphibians and reptiles.

They usually nest in trees, generally more than 5 kilometers away from human habitation. Females usually lay 2 or 3 eggs per clutch.

The Giant Ibis has an extremely small population, which declines rapidly as a result of forest loss and hunting. This species is now extinct in Vietnam and Thailand. It is also believed it might soon become extinct in Laos. With the Giant Ibis classified as critically endangered, the conservation work carried out by organisations, such as WCS and WWF Cambodia, is essential to its survival. These organisations have launched projects that include nest protection schemes and educating local communities on the importance of protecting Giant Ibis in order to prevent its complete extinction. The African Sacred Ibis inhabits marshes and mud plains throughout most of Africa.  This species breeds in Sub-Saharan Africa and Southeastern Iraq.

The African Sacred Ibis is closely related to the black-headed Ibis and the Australian white Ibis.

They have a long, curved bill which allows them to probe the mud in search of food. They eat insects, worms, lizards, eggs, fish, frogs, small mammals, and even crustaceans.

The African Sacred Ibis is very adaptable and will even make use of dumps in order to find food. However, their adaptability nowadays poses a threat to native birds in Europe where the Sacred Ibis has been introduced.

The African Sacred Ibis breeds in flocks. Females lay a clutch of 3-5 eggs and the incubation takes 28-29 days. Both parents take a role in raising the chicks. The chicks usually leave their nest at 39-45 days of age. The birds reach full maturity at 4-5 years of age. These birds were and still are an important part of Ancient African culture. The Sacred Ibis was commonly venerated and mummified as a votive offering to the god Thoth. Thoth, the god of wisdom, knowledge, and writing was depicted as a man with the head of an Ibis. Ancient Egyptians believed that these birds were related to the god Thoth and were treated with great respect.

This species is classified as “Least Concern” by the International Union for Conservation of Nature. It is estimated that the global population of the African Sacred Ibis ranges from 200,000 to 450,000.

Despite the fact that the population trend appears to be decreasing, the decline is not believed to be sufficiently rapid to approach the thresholds for Vulnerable.