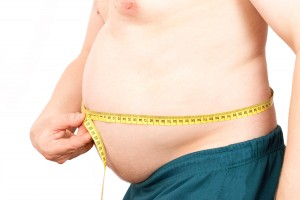 If you have fat that lingers around your middle, it could be an indicator of a hormonal imbalance. Struggling with losing weight as well as keeping the weight off is a sure sign that you have hormones that are playing unfair in your body. Your hormones are in control when it comes to your metabolism, cravings, and appetite.

There are two types of fat in the belly; visceral and subcutaneous. The external fat is the squishy stuff that you can squeeze between your fingers when you pinch your belly. There’s actually another layer of fat beyond that called visceral, which can threaten your health. With this fat, you get more inflammation, stress on the organs, and increased fat storage.

Insulin is essential for processing sugar in the bloodstream. When you consume too many carbohydrates, processed foods and sugar-filled drinks, you can end up with a condition called insulin resistance or Type 2 diabetes. The hormone is created in the liver and directs that organ as well as muscles and fat cells to remove glucose from your blood stream and store it. When this hormone is disrupted because it’s overwhelmed with the amount of glucose in the system, it can create serious problems like diabetes, weight gain, some cancers and strokes.

Increasing your protein while decreasing the amounts of processed foods you consume can help to reset your insulin resistance. The high amounts of protein balances the glucose in your blood and helps to decrease the overwhelm that the body is experiencing. It won’t shut down when it’s needed the most.

Cortisol is a stress hormone that can make it incredibly tough to lose your belly fat. In fact, it’s a problem for thin people who are stressed, too. Even though they have less belly fat than overweight people, overall, they have a soft, squishy middle, too. Cortisol is tied to the fight-or-flight response of the body. While it was commonly used to give us bursts of energy to fight off predators, our bodies are given the same triggers when we’re upset, depressed, or anxious. We’re less active as a species than we used to be, so the body doesn’t know what it should be doing with all the call for increase calories. It just stores it for later in the belly.

Sleep deprivation has a negative impact on our stress levels. Those who wake up tired and annoyed already have increased levels of cortisol at the start of their day. A good diet filled with protein can help with the body’s imbalances, but reducing stress is an important part of weight loss when you’re trying to reduce cortisol as well as the belly fat that produces it.

This hormone is produced in the adrenal glands, and can help negate the affects of cortisol. It influences our ability to gain and lose muscle. It can be lacking in some people, which makes cortisol even more of a problem. You can visit your doctor to find out if you have low levels of DHEA. Your doctor might prescribe supplements.

This hormone has a variety of roles in the body, but the main one is to regulate how many calories we eat and burn on a daily basis. Leptin is carried along by the blood stream and into the brain where it informs the brain of how the body is faring. If there’s plenty of fat stored in the body, the levels of leptin will let the brain know whether it needs to trigger a hunger response. Much like insulin resistance, there’s a problem with the way that leptin is working with the stored fat in those who are overweight. The amount of fat cells in an overweight person’s body should be telling the leptin receptors that it doesn’t need to eat. Leptin resistance is a problem because the body can’t see and give the appropriate response to the levels present.

When you start to lose weight, the leptin levels are reduced, which is a signal to the body that you are starting to starve. The leptin levels are completely out of whack and so is the body’s response. This is why it can be incredibly difficult to lose weight. To reset the leptin and the body’s response to it, you have to exercise frequently, get a good amount of sleep, and eat lots of protein.

While you may think that you have no willpower whatsoever, you’re actually a victim of your body’s hormone production. It can take a while to level out these hormones, which is why many people gain and lose throughout their lives. It can be tough to regulate the hormones while trying to lose. Make sure you’re on a healthy diet, increase your consumption of protein, reduce carbs and processed foods, and get plenty of sleep. You’ll also need to exercise – especially if you make bad diet choices.

Next post: What is Lipolysis & How Does it Happen?