The History Of Underwater Cameras 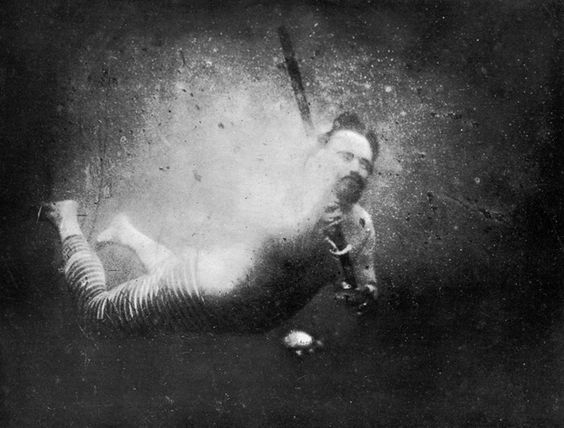 William Thompson, from England,  took the first underwater photograph back in 1856 in Weymouth Bay.  He built a metal box to house the camera and mounted it on a pole.  It was lowered over the side of his boat on this pole down 18 feet to the sea floor below.  Thompson controlled the camera’s shutter from the deck of his boat.  Here is a picture of that very camera he used…

And here is a picture of the photograph he got using this underwater camera…talk about high-def!  Yes, folks, this is the first underwater photo right here… and that year once again – 1856. Thompson made the photo using a wet-plate colloidion process, where the photo is coated, sensitized, and exposed.  Thompson left his camera shutter open for 10 minutes trying to maximize enough light. Boutan actually dove down into the ocean depths wearing a very heavy diving suit, armed with his camera.  He took several photos.  He published his first photograph, faded and blurred, taken under water in 1893.  This is how it looked… Louis Boutan graduated in 1879 from the University of Paris, with a doctorate degree in Science.  He was a professor in marine biology soon after, and brought a new perspective to the underwater world.  His diving opportunities inspired him to discover a way to capture life in the deep.

Louis’ brother Auguste was an engineer, and together they came up with an underwater camera.  They had to adjust the diaphragm, the plates, and the shutter, but their biggest problem was “light”.  Up until that point, flash photography required oxygen, so Boutan found M. Chaffour, who created a bulb that housed a magnesium ribbon. The bulb was filled with oxygen, and the magnesium ribbon was lit with an electrical current.  However, this didn’t work.  The burning magnesium led to smoke, which clouded the lens.  The Boutan brothers persevered.  Another engineer by the name of Joseph David, help them create a rubber light bulb.  More problems arose.

Louis Boutan eventually did find success with his underwater camera.  Dual carbon-arc lamps were adopted.  Flashes became more portable.  The equipment slimmed down and was lighter.  The lenses improved too.  Louis Boutan was ahead of his time.  His 1898 book called, “La Photographie Sous-Marine (Underwater Photography)” detailed his work and his colleagues appreciated his progress very much.  The book came with many photos taken over the years.

The movie, “20,000 Leagues Under the Sea” was the first commercial use of cinematography.  It was made in 1916.  J. Ernest Williamson was hired to do the underwater photography.  Got some time on your hands?

The first underwater colour photographs were produced in 1923 by botanist W. H. Longley and photographer Charles Martin.  Martin used magnesium to power the flash.  He captured color underwater.  He only took pictures of objects that didn’t move such as coral, anemones, and sea fans.  Check out the July 1927 issue of National Geographic, which features this Hogfish taken by Longley and Martin in 1923.

The Development Of Underwater Photography

There were others who were passionate about cameras that could be used underwater.  The Beuchat company from France began more work on underwater cameras in 1934.  Georges Beuchat was an avid diver, and he produced the first commercially available camera housing called Tarzan in 1950.

In 1957, Jean de Wouters, a Belgian engineer, designed an amphibious 35 mm underwater camera called Calypso.  Wouters worked with Jacques Cousteau on his famous Calypso ship.  The Nikon camera giant purchased the design and re-released the Nikonos camera in 1963.  The Nikon company is famous for their cameras today.

Whether today’s underwater photographers are inside a submersible in the Marianas Trench, swimming in their scuba gear in Shark Alley in the Indian Ocean, or snorkeling on the Big Island in Hawaii, they will face some difficulties obtaining the best pictures.

The biggest obstacle is the loss of color and contrast.  Those two photographic elements seem to get worse, the deeper one goes.  Water absorbs longer wave lengths of sunlight quickly, such as red and orange, so the naked eye translates everything into blue/green.  The loss of color increases vertically through columns of water, as well as horizontally, so things farther away from the camera also appear colorless and unclear.  This effect occurs in apparently clear water, such as that found around tropical coral reefs.  Photographers can remedy this color loss by getting as close as possible to the subject, minimizing the amount of water between the camera and what is being photographed.  A distance of one yard or less is preferred.

Serious photographers also use a flash.  This technique is used to restore color lost to depth.  These photographers use a trick called, “Fill Flash”, to add the colors that we lose.  The range of visibility under water is a another concern.  Thanks to computers today, photographers sometimes have techniques inside their cameras to correct all the troubles caused by water.  Sometimes this needs to be done once the photo is imported back into the computer.

Back in 1960, taking photos underwater wasn’t so easy, especially in the deepest crack in the ocean floor, known as the Marianas Trench in the south Pacific.

Watch this if you dare!

What makes this camera great:

What makes this camera worth your time:

Why it’s so good:

Previous post: Snorkelling At Caladesi Island – What You Need To Know