The History Of Surfing 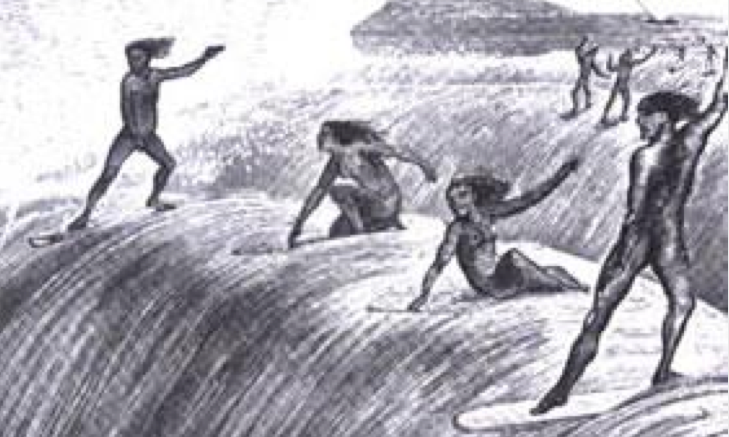 Did you know that Hawaii is the birthplace of surfing?

It happened back in 1779 when the first known written document about surfing was made just a few months after the death of the famous explorer, Captain Cook.

The author of the text about surfing or he’e nalu, (which means to slide on the waves) was Lieutenant James King.

You can imagine how shocked he was to see the natives riding wooden boards on those big crashing waves at a beautiful place like Kealakekua Bay.

He described what he saw in the Kealakekua Bay as an activity the locals were doing solely for fun.

Yes, and thus one of the most exciting water activities ever was born, and to this day surfing has only grown in popularity around the world.  There are those who surf who feel it is the most amazing feeling in the world, and once you catch the right wave, you’re bound to see why.

But, there is still some debate about the origins of surfing, believe it or not.  According to other historians, surfing originates from Polynesia that later “arrived” in Hawaii.  That’s one theory bobbing up and down on the waves out there, however, let’s stick to the Hawaiian version for now as it is the most popular notion.

The Sport Of Kings

Back in time, surfing was reserved only for royalty and it was called “sport of kings”. King Kamehameha I was no stranger to surfing and he was known to be very good at it.  Imagine it, an actual king like this formidable gentleman surfing those big waves and riding a phat tube!

By 1819 the Hawaiian kapu (taboo) system was finished and commoners were now able to freely use their boards and ride the waves. Once the western missionaries arrived in the 1800’s the Hawaiian customs such as hula and surfing were discouraged.

By the end of the 1800s the “Merrie Monarch” King Kalakaua (pictured right) who was one of the last reigning monarchs of the Hawaiian Kingdom, brought the hula back as Hawaiian cultural pride.

In the beginning of the 20th century, Waikiki Beach was the place where surfing again became popular and revived.

Duke Kahanamoku who was a Waikiki beach boy and grew up surfing, started teaching visitors how to surf and canoe.

Later in his life he became a multiple gold-medal winner at the Olympics as a swimmer. He is also known as “father of modern surfing”. You can now thank him for spreading the popularity of the sport to the mainland U.S. and Australia.

Whatever bay you pick to hit those waves, Duke Kahanamoku will be proud of you continuing this fine Hawaiian pastime.

This island is pure heaven and surfing can only add up to your fun here.

Blast From The Past

James Cook (1728 – 1779) was a Captain in the British Royal Navy.  He explored the Pacific Ocean extensively, looking for a passage to the Atlantic Ocean.  On his 3rd voyage to that area, Captain Cook was killed in 1779 in a fight with the Hawaiians.  While exploring the seas around Hawaii, Cook’s first Lieutenant, James King, took time to record in the ship’s log, the local people at Kealakekula Bay, surfing.  He noticed some 20 or 30 men out beyond the breakwater, lying face down upon a board and waiting patiently for large waves to roll in.

Here is some of King’s account of the first surfers … “they keep their legs close on top of it, & their Arms are us’d to guide the plank, thye wait the time of the greatest Swell that sets on Shore, & altogether push forward with their Arms to keep on its top, it sends them in with a most astonishing Velocity, & the great art is to guide the plan so as always to keep it in a proper direction on the top of the Swell, & as it alters its direct. If the Swell drives him close to the rocks before he is overtaken by its break, he is much prais’d. On first seeing this very dangerous diversion I did not conceive it possible but that some of them must be dashed to mummy against the sharp rocks, but jus before they reach the shore, if they are very near, they quit their plank, & dive under till the Surf is broke, when the piece of plank is sent many yards by the force of the Surf from the beach. The greatest number are generally overtaken by the break of the swell, the force of which they avoid, diving and swimming under the water out of its impulse. By such like excercises, these men may be said to be almost amphibious. The Women could swim off to the Ship, & continue half a day in the Water, & afterwards return. The above diversion is only intended as an amusement, not a tryal of skill, & in a gentle swell that sets on must I conceive be very pleasant, at least they seem to feel a great pleasure in the motion which this Exercise gives.”  Courtesy Hawai’i State Archive

Obviously, by 1779, riding waves, either standing or lying on hardwood surf boards, was a tradition and important part of the Hawaiian culture.  Chiefs demonstrated their mastery of the surf and the common people followed.  Anthropologists can’t be certain when these Polynesian people first began to challenge the waves.  Scientists do know that around 2000 B.C., people began to migrate out of Asia and settle in the south Pacific near Hawaii, Tahiti, Australia, and New Zealand.  Surfing became known as, “The Sport of the Kings.”  The people of this part of the world had to master the ocean in order to survive.  It seems that they first surfed on their bellies and probably used whatever they could find to ride the waves.  Historians suspect that the art of riding waves while standing on a board was probably invented in Hawaii.

Captain Cook realized that surfing was deep rooted into the Hawaiian culture because the experts (kahuna) had developed chants to christen the boards, and chants that word give the surfers, men and women, the power to conquer the waves.  Hawaiians had no written language until the White Man arrived, so Captain Cook could determine how important surfing was to the Hawaiians by studying their songs.  He discovered legendary love matches made and broken in the surf.

Cook discovered that the Hawaiian people’s culture was set up around a code of taboos which regulate everything that the people did such as growing food to riding the waves.  The commoners couldn’t surf where the chiefs surfed.  The chief’s boards would have been twice as big as the commoners’ boards.

The “white skinned people” were not good for the art of surfing in Hawaii.  Because of Captain Cook’s discovery of this magical place in the south Pacific, many people came there.  By 1819, life in Hawaii had changed for the worse, including surfing.  The White Man’s religion had arrived and it did not approve of surfing.  Missionaries frowned upon men and women wearing loin clothes and especially having fun together in the water.  In spite of this Calvinistic morality brought to Hawaii and area by the White Man, surfing did not disappear completely.  The native people knew how exciting surfing was and how happy and healthy it made the people feel.  It might have happened in secrecy, but it did happen.  Even Mark Twain visited the Hawaiian Island and wrote in his 1866 book called, “Roughing It”, and said, “I tried surf-bathing once, subsequently, but made a failure of it. I got the board placed right and at the right moment, too; but missed the connection myself. The board struck the shore in three-quarters of a second, without any cargo, and I struck the bottom about the same time, with a couple of barrels of water in me.”

Surfing was definitely drowning and the Hawaiian customs were definitely sinking.  The native Hawaiians fought back to maintain their culture and old ways throughout the 19 century.  In 1898, the United States annexed Hawaii as one of their territories and the rest is history.