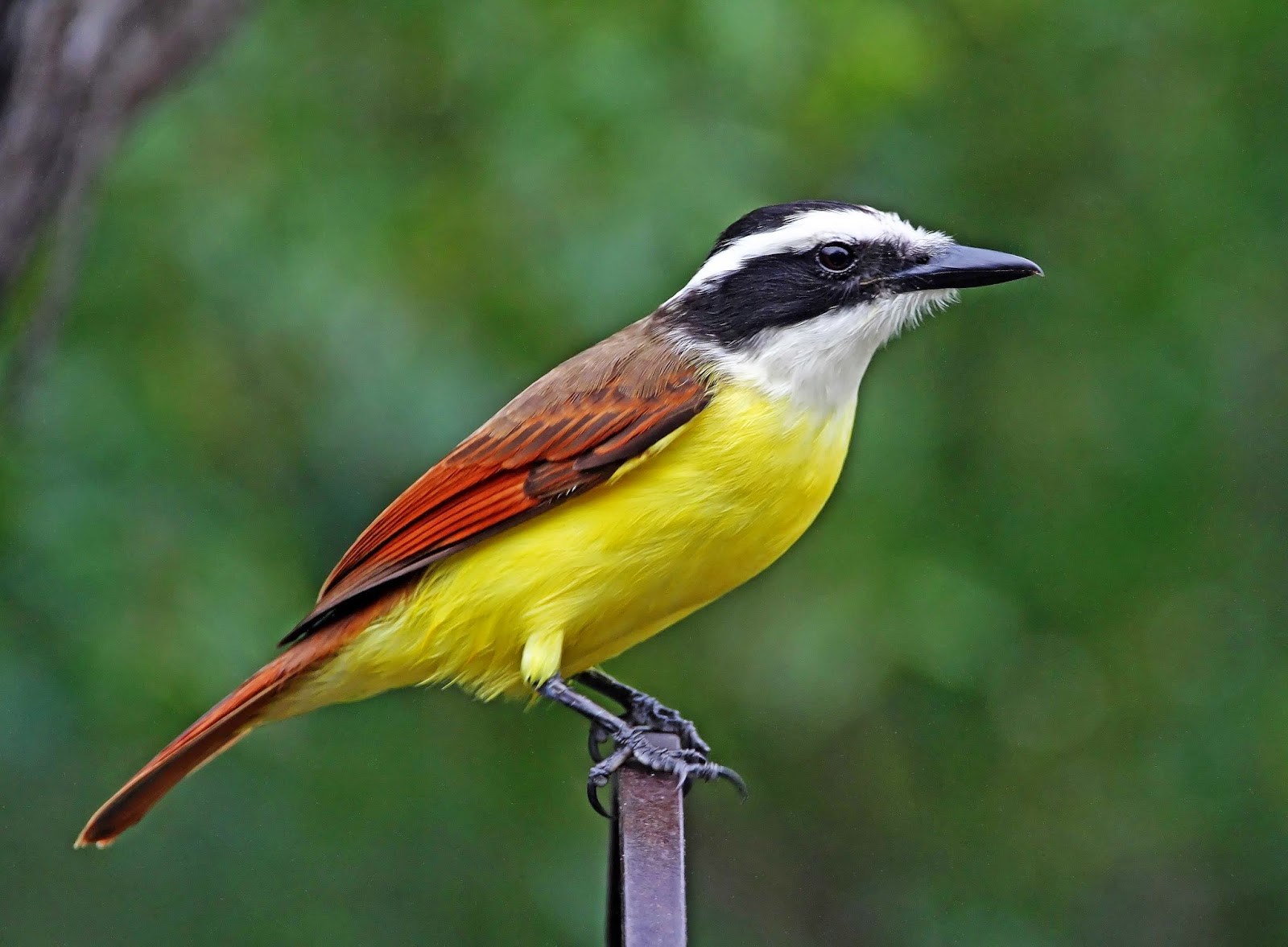 The Great Kiskadee ranges from southern Texas down along the coasts of Mexico into other central American countries, and as far as Argentina.

The Great Kiskadee loves to be near water like rivers, streams, lakes, and the ocean.  It prefers a dense environment, though you might spot one out in the open spaces like a parkland.

Beach Baby Bob and his wife live in a type of tree house in Bucerias, Mexico, which is almost right on the Pacific Ocean, just a few miles north of Puerto Vallarta.

The hotel has the largest parota tree in town beside it, and Beach Baby Bob and his wife Sue live on the roof of the hotel.

They love birdwatching, so the Mexican penthouse is perfect for spotting birds such as the Great Kiskadee, and other creatures.

The Great Kiskadee is territorial and doesn’t like other birds on its property, so aggressively, it will drive away larger birds entering its territory.

While Bob and his wife were eating their breakfast this one fine day, 2 Great Kiskadees landed on the branch beside them.

Two or more Kiskadees is called a “shower”.  This shower or pair seemed to be watching Bob and Sue eating their breakfast.

They might even have liked the mangoes and papayas that were being served, because as omnivores, they eat a variety of fruits and veggies as well as meat, but Bob and Sue weren’t sharing.

They soon flew away.

The Great Kiskadees will eat moths, beetles, grasshoppers, crickets, bees and wasps, flies, and other insects and spiders.

You might see this bird diving for fish in shallow water.

There are very few fish-eating passerines that do this.

Passerine birds have 3 toes that point forward, and one toe that points back, which makes them great at perching.

Facts About The Great Kiskadee

Here are some words to remember about The Great Kiskadee, just in case you want to share your knowledge with a child.

Conservation … no concern at the moment

This is a bold bird in every way.  Not only are the Kiskadee’s colors striking, but you might encounter the bird sitting out in the open spaces sitting … “kis ka dee kis ka dee”.

They don’t mind being seen and love to sit up high, often above water.  They dart about catching flying insects, thus Flycatcher family, or maybe they might pluck a small fish from the water.

If you’re lucky and you have feeders out, a Great Kiskadee might pay you a visit.

The Kiskadees built their nests anywhere from 6 to 50 feet above the ground.  The nest is usually around the 20 foot height.  It is made of moss and branches with a side entrance.
It kind of resembles a squirrel’s nest, maybe not quite as big.  The ma and pa both look for food for the babies and both hang around to protect them from predators.
Feature Picks – Best Birding Binoculars