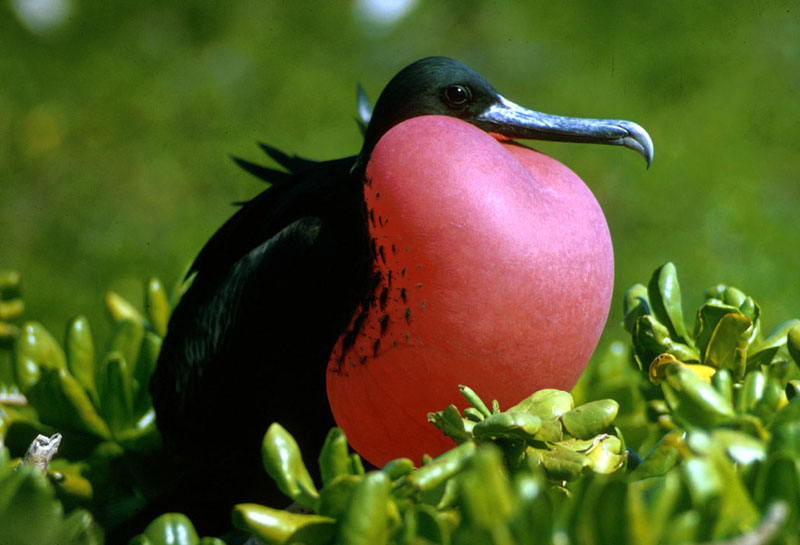 Frigatebirds AKA frigate-petrel are a family of seabirds known scientifically as Fregatidae.

This family of birds can be found across all tropical and subtropical oceans, and some of them (the males) are known for their distinctive characteristics, such as their “gular pouches”.

That is, their inflatable red pouch that hangs beneath the males’ beaks, very eye-catching for the ladies, and reminiscent (at least to me) of a turkey snood. Keep in mind, they don’t all have this pouch, ie. the females. There are five species of them that can be classified in a single genus, Fregata.

Our today’s post is all about these amazing birds. We will start with some cool facts, before we move on to frequently asked questions about frigatebirds.

To get things going, here is a random assortment of interesting facts about frigatebirds to consider:

Keeping these facts in mind, let’s take a look at a video of these magnificent birds in action.

By the way, “Magnificent Frigatebird” is actually a type of Frigatebird, so don’t be surprised if you hear that used in a conversation between two birders.

Next, we answer some of the frequently asked questions about the Frigatebird. What does frigate mean?

You can’t really get to know a frigatebird without wondering, what the heck is a “frigate”? Is is a weird german french fry?  Nah. The word “frigate” means lofty, heavily armed and very fast moving. The term tends to be applied to military ships, for their speed and ability to attack. Think of it as a fast moving tank on the water.

Aptly, the frigatebird is also called a “man-o-war” bird because it sometimes harasses other birds until they drop recently captured food, which the frigatebird then snatches in midair and goes back to whatever it was doing before it decided to bother the other bird. Their bill is long and sturdy with a prominently hooked tip. They also have an exceptionally large wingspan; in fact the largest wingspan to body weight ratio of any bird in the world.

Their unique body shape gives them exceptional aerial maneuverability and lets them glide on thermals for days at a time.

Oh, and we should mention their feet…

Frigatebirds, although majestic in many ways, were not by the grace of the Almighty given the most impressive lower bodies, with stubby legs and small, webbed feet. As a result, they are not big on walking or swimming, or really clenching on to anything the way an eagle or hawk might.

This is partly why they remain aloft so often, and also a fact that seemed to perplex Darwin in his study of these birds.

Where do frigatebirds live / be found?

They live in the southern US such as the Florida Keys and into South America, along the Brazilian and Peruvian coasts, as well as in and around the Caribbean Sea.

Take a look at this map of the breeding grounds of Magnificent aka Great Frigatebirds. For instance, we learned that the Great Frigatebirds have their largest colony in Barbuda, East Caribbean, with the second biggest colony being the Galapagos Islands. We learned this birding tip from the hospitable folks over at barbudaful.net, who are very proud of their proximity to such a congregation of fine feathered friends.

If you weren’t aware of Barbuda’s location offhand, here it is on a map.

Now, where frigatebirds breed depends on the type of frigatebird, of course.

The majority of frigatebirds breed mostly south of the United States, but wanders northward along the coasts during non breeding season, as is their wont.

They love the tropical coasts, such as the West Coast of Mexico, near Puerto Vallarta, and any island situated in tropical waters.

They also can be found in the Indian Ocean west of Australia, in specific areas around certain islands like Christmas Island. You would never find a frigatebird in the Arctic. They can’t stand the cold as much as most people.

For this article, we reached out to both Brendan Tiernan of Parks Australia, as well as Renata de Jonge from the Christmas Island Tourism Association.

The CITA corroborates these facts: “They have an impressive wing span of up to 2.5 metres and are known locally as the pirates of the sky as they soar lazily about waiting for opportunities to steal the catch from other seabirds.

The male frigate bird has an inflatable bright red throat sac during courtship period, (between December and May) which can be comical to watch as they try to fly around with it flapping in the wind.

The display call of the male frigate sounds similar to a police siren. They also have a repetitive screeching sound that makes you feel you’re in a set of Jurassic park.” Next, we take a look at frigatebird babies… Consider this. Frigatebird parents have one baby bird at a time and it is born naked and kept warm by both parents for 55 days. Soon after, it develops soft white feathers.

The parents feed the baby for 6 months and protect their baby for 6 weeks at least.

How big are frigatebirds?

Frigatebirds are about the size of a chicken and have extremely long, slender wings, spanning to about 2.3 metres (nearly 8 feet), and a long, deeply forked tail.

They are close to 100 cm in height and weigh almost 2 kg. Their size and distinct features are the inspiration for books, even. They have the largest wingspan in comparison to it’s body of any bird species in the world which makes them great at soaring.

Watch this video to see more of them flying. Quite the sight to see!

And the questions keep on coming!

Why do frigatebirds have that red thing?

If you missed the first part of this article, male frigatebirds are most commonly known for their red throat pouch, called their “gular pouch”. These Louis Armstrong-sized throat pouches are inflated to attract female frigatebirds during the mating season.

Can frigatebirds get wet?

They have a diet that consists of marine animals and so they have to pluck their prey from the water without landing as they are unable to take-off from a flat surface such as water and they can’t swim. Precarious!

But they don’t care, they’re masters of staying aloft!

Their feathers have no waterproofing and become waterlogged if they stay on the water for more than a minute or two.

How long / far can frigatebirds fly? The frigatebird spends the majority of its life in the air.

Frigate birds have been known to stay in the air for nearly a whole week and only land on the rocky cliffs to breed or to rest.

Charles Darwin called frigatebirds ‘the condors of the oceans’ because they can spend days and nights flying.

How did frigate birds get their name?

Again, if you missed the first question, French mariners’ referred to the frigatebird as “la frégate” which is translated as a frigate or fast and powerful warship.

The frigatebird usually keeps within 100 miles (160 km) of land, because it only roosts to sleep, usually high up on a street lamp, looking down at you from its lofty perch! It breeds in crowded colonies on islands.  Both parents incubate the single white egg.

What do frigatebirds eat? This bird will eat almost anything but it prefers to snatch food off the surface of the ocean and steal food from other birds such as fish, squid, turtles, crabs, and jellyfish.

Maybe a bird will drop a piece of food in flight, and the frigate bird will swoop in and catch the tasty morsel in mid air and take it out to sea to eat it.

Of course, learning how to chase other birds and fight them in order to steal their food takes practice.

Young frigatebirds are taught to hold sticks in their mouths and chase each other.

They do not migrate but wander extensively when not breeding, so it may look like they’re migrating to onlookers.

Do frigatebirds mate for life?

The breeding period of the frigatebird is incredibly long. Males and females incubate the eggs for around 55 days.

Once hatched, chicks don’t leave the nest until they are about 170 days old. Even when they leave the nest, females continue to take care after them and feed them until they are one year old.

Thus, the male can breed each year, while the female breeds only every other year.

The male frigatebird abandons its mate and half-grown chick and leaves the breeding colony, presumably to molt and returns for another breeding attempt with a different mate.

When do frigatebirds mate?

From August to October, a spectacular courtship display occurs for the frigatebirds.

The magnificent male frigatebirds sit in varying size groups, red throat sacs inflated, clattering their bills, waving their heads back and forth, quivering their wings, and calling to females flying overhead.

Remind you of any people you know? Lol

Why does the frigatebird expand its pouch?

As you probably know by now, the male’s pouch is red and he expands it to impress the “ladies”.

They might think that he is strong and can make great babies. Same reason people drive Camaros.

How many different kinds of frigatebirds are there?

There are 5 different species of frigatebirds …Magnificent, Ascension, Christmas, Great, and Lesser.

The Christmas Island frigatebird of the Indian Ocean is listed as critically endangered, because approximately 25% of their breeding area was cleared for phosphate mining before 1946.

Many breeding colonies were deserted due to dust fall-out from the mining.

How do frigatebirds protect themselves?

Frigatebirds can fly very high if necessary and that keeps most of their enemies at bay. They rarely land so this lack of staying still keeps them safe.

They can fly very quickly and they are a big bird to scare away smaller animals. They have a hooked beak for tearing food away from others and also used as a weapon in an emergency.

And so that ends our look at frigatebirds…for now!  If you have any comments, stories, or info, please add it below! Previous post: Arr Matey, Its The Top 5 Terrifying Pirates Of Em All!