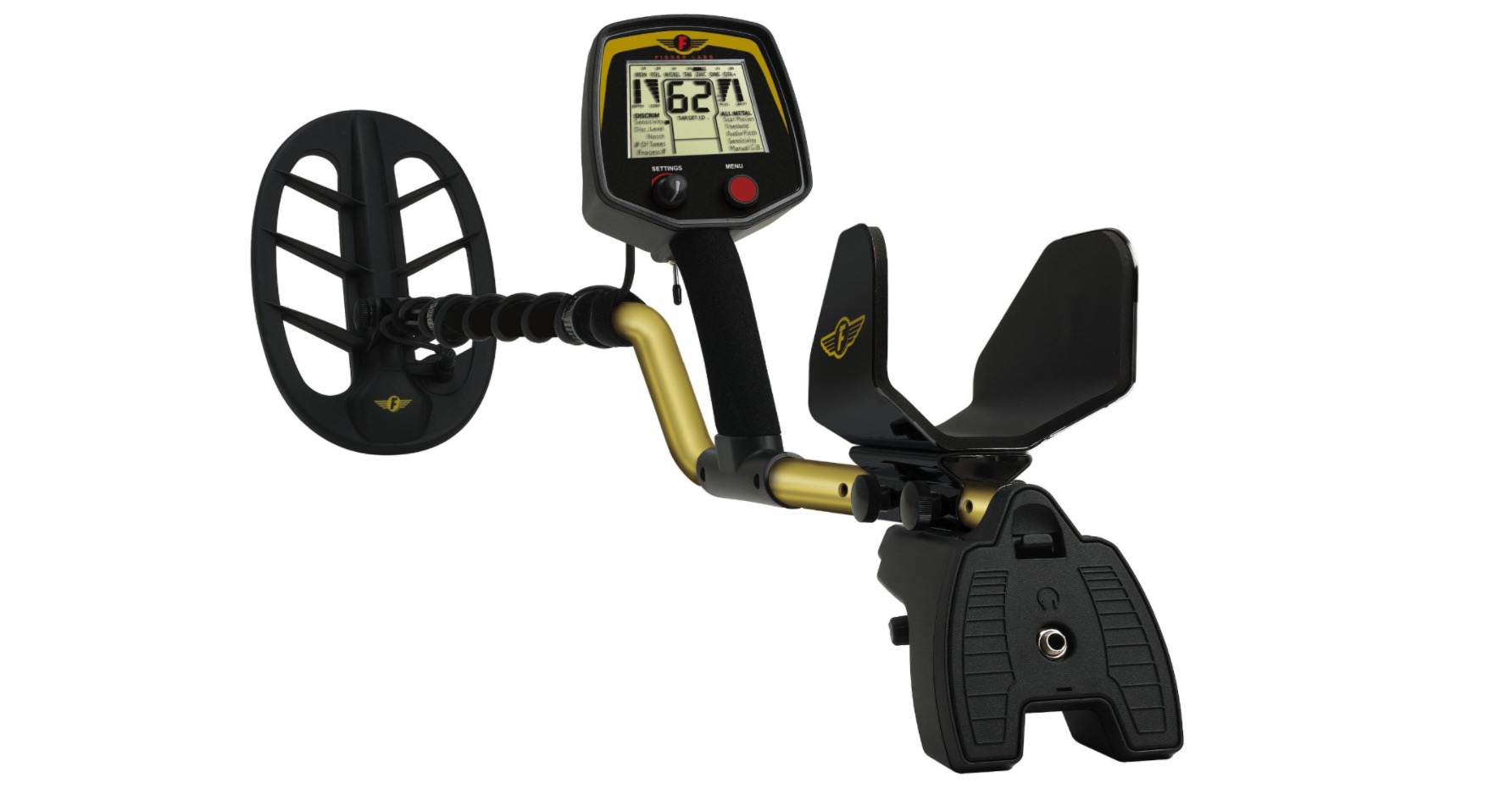 Coming in at #2 on our list of the Top Five Metal Detectors on the market is the Fisher Labs F75 Metal Detector.  Be careful folks, because this is where it gets really serious.

For those that are deep into the hobby of metal detecting, and have decided that they want to stop playing around and get a device that’s going to serve as one of the best in this metal detecting process, then look no further.

The Fisher Labs F75 was not built to be beat by any other metal detector on the market, and when we dissect why this bad boy is so awesome, you see exactly why we say this.

First thing that must be covered on this device are its aesthetics.  The base of the metal detector is actually identical in its shape to the Land Ranger Pro, which is a plus, because we really loved the base on the Land Ranger Pro!

Also, this metal detector finally features a break in the color patterns of the previous three metal detectors that were on our list.  The base pole of the metal detector has an off-goldish color, while the rest of the device is accented in all black.  The arm rest looks to be fairly comfortable, sleek and professional as well, which we love.

The LCD monitor interface on this device looks like it’s fairly complicated to operate, however, that’s to be expected on a device of this caliber, so we don’t mind.  The metal detector also has a natural bend in the middle of it that some of the other devices do not have.  We assume this makes it a bit easier to reach some of the harder to access areas, that one may encounter while metal detecting.

There are several features that must be covered on this device in order to give you a better idea of just how amazing the Fisher Labs F75 really is.

Very Extensive Menu Section – There is an extremely extensive section for all those that need to peruse all of the various features that are included on this metal detector – and there are many!  So, it would be wise for any future purchaser to thoroughly go through the controls first.

Ground Balance – Covered in many of our other articles about metal detectors, the ground balance is what helps metal detecting users filter out all of the mineral content in the group, that may interfere with the detector’s ability to pick up on the necessary minerals.

Discrimination – We have to cover the wealth of discrimination features that are on this device.  It contains everything that was on the previous metal detectors that were covered on our list and then some.  In this case, the discrimination mode can be adjusted with a few factors that help make it the best mode on the entire device, and more effective than those of most other metal detectors if they even have such a mode.  Firstly, there is an adjustable sensitivity reading on the device, to ensure that one can ignore some of the lower frequency responders in the field (general trash).  As with other metal detectors, this one functions by using the electrical conductivity information associated with several targets, to either filter them in or out, depending upon the user’s stated desires.

Several Tones – There are several different tones that are associated with the device, and because of them, the metal detector is actually able to filter out a lot of the debris and other unregulated trash that may come up as we mentioned in the sensitivity rating.  The tones are helpful when trying to filter items out by the type of audio feedback that they generate.  This is a little less so for trash, and more for specific metals that one wishes to omit from the possible ‘dings’ that they’ll receive when hunting with this specific metal detector.

In conclusion, when you really dig into it, it makes complete sense why we would have rated this metal detector as highly as we did, and you can see that it is clearly deserving of the rating and acclaim that we gave it.

Between the specifics of its ability to discriminate among different items, pinpoint where specific metals lay, as well as ground balance, and an extensive menu selection, this metal detector is one of the more efficient devices that exist on the market these days.

It is difficult to imagine that there is a better metal detector out there that exists on the market.  However, this does serve as an effective prequel to the next device on our list.

Watch this video review of the Fisher Labs F75 to get more info and a closer look at this metal detector.

Next post: Tulum is the Hottest Mexican Holiday Destination