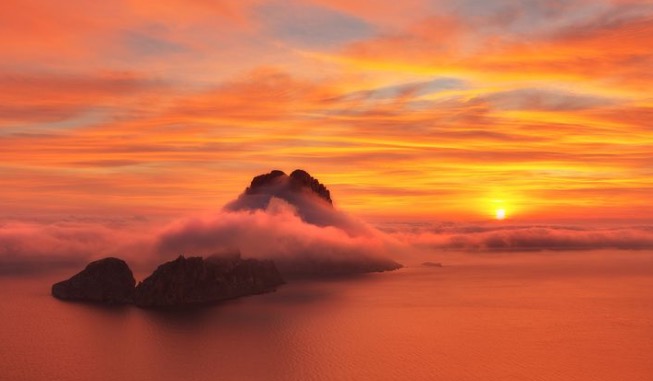 Many people would love to visit Spain if they had the chance.

It goes without saying that Spain is a country that has a certain mystique, and is considered to be one of the most exotic and sensual countries in the world.

We do hate to gloss over Spain at this time, but we want to take out our magnifying glass, and look at a very small part of Spain right at this moment.

Upon closer inspection, we see that off the coast of eastern Spain some 150 kilometres, lies the island of Ibiza, which is a popular place where tourists flock for a variety of reasons, and which has a special magnetism of its own.

The culture there is very rich, as anyone who has gone there knows, and Ibiza is well known for attracting hoards of tourists.

Once again, as much as we’d like to linger on the topic of Ibiza ,we are moving towards a smaller, but even more spectacular place!

Now, just west of the island of Ibiza is the mysterious island of Es Vedra.

This uninhabited island (uninhabited by humans, that is) is one which sees visitors come by boat to explore the tiny island.

Please understand that when we say that Es Vedra is mysterious, it isn’t because of lack of information about the island.

Es Vedra, in fact, is a very well known island – you might even call it famous.

It is a nature reserve, and home to three main creatures which are all distinctly different.  We’re speaking here of mountain goats, lizards, and falcons.

These are the main inhabitants of Es Vedra, and humans are not allowed to set foot on it without a permit.

There are those who have obtained such permits, as you will see in the following video showcasing the rare beauty that is Es Vedra, but know that these people have a special reason to be there.

These visitors, in this instance, went to Es Vedra in the name of science, although they did enjoy themselves quite a bit as you can see.

As we normally like to discuss beaches here, we must confess that Es Vedra is not known for some obscure golden strip of sand that is off limits.

The above video showed us as much. There is a lot of scrubby brush on Es Vedra, and gravel-like loose rock.

When travellers come to the island by boat, and linger just off shore, they do enjoy the pristine waters, and many boats stay there overnight.

It isn’t far from the island of Ibiza after all, and there is just something about Es Vedra that makes you want to hang around.

We should mention that Es Vedra has many myths swirling around it, which only adds to its mysterious allure.

Without going into each of them in great detail, there have been UFO sightings around Es Vedra, causing at least one plane to change its course.

The tiny island is also rumoured to be connected to the lost island of Atlantis (Es Vedra being the tip).

Some have labelled the island to be the third most magnetic location in the world, after the Bermuda Triangle.

These are just a few tall tales associated with this curious location.

You might think this would be enough to call Es Vedra a strange place, but there are even more stories about it, beyond even what we’ve mentioned here.

You can read about these legends in more detail, by following the link below:

Regardless of whether Es Vedra was the same island where the sirens called to Ulysses, if you do manage to make the boat trip to Es Vedra, the very distinct outline of the island will stay etched in your mind forever.

It has one of the most inspiring geographical forms known to mankind, even though it is just 413 meters in height.

When you see it in the distance, you want to see it closer, and hence humans have been drawn to this little island for centuries.

Herein, lies the mystery of Es Vedra, as there are many islands poking out of the sea, and very few of them have the power to draw people in quite like this one.

Consider as well that there is nothing waiting for you when you reach Es Vedra – except Es Vedra. No big welcome wagon awaits you there.

Just the lapping waves, a few birds, and a school of fish. Here are some young gentlemen to introduce you briefly to the island as they cozy up to the shore.

Es Vedra has even inspired some amazing music…

Next post: We Review The Best Air Pumps For Inflatables In 2020