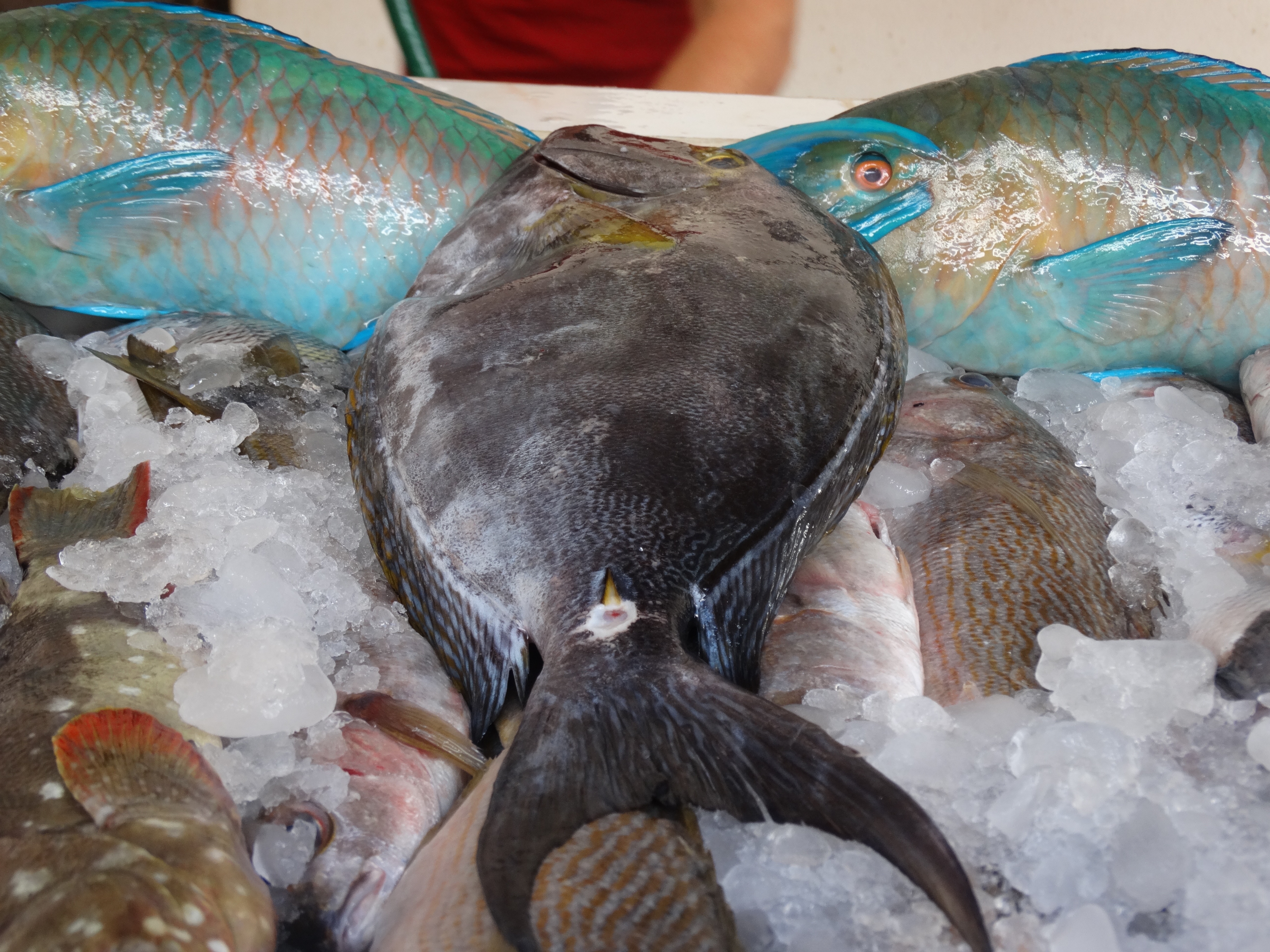 La Cruz de Huanacaxtle is a Mexican fishing village that has been modernized in recent times, and is famous for its Sunday fish market.

Here is a picture we took of the surroundings at La Cruz.  As you can see, it is very scenic and beautiful looking out onto the waters.

La Cruz is a short drive north of Puerto Vallarta along highway 200, which hugs Banderas Bay on Mexico’s Pacific coast.  Every Sunday, thousands of tourists visit the market in La Cruz which takes place at the marina.

You can board any local bus, and say La Cruz, and the bus will stop at the right corner.  From there, just follow the crowds to the water.

This market combines the traditions of Mexico, with the sophistication of modern times. There is an upscale assortment of breads, jewellery, desserts, vegetables, fruits, art, clothing, and of course, fresh fish.

The fishermen arrive loaded down with the catch of the day, such as tuna, mahi mahi, red snapper and yellow fin surgeonfish.

We have been to the La Cruz market many times, and we always buy fresh fish.  The fishermen just brought in a supply of yellow fin surgeonfish today, so we decided to try it.

We have never heard of a surgeonfish before.

There was a Mexican lady at the fish counter, with a group of tourists, explaining what she knew about the yellow fin surgeonfish, so this is what we discovered. We decided to buy the Yellow Fin Surgeonfish to try it out.  It is the largest of the 42 different kinds or species.

Of course, you want to make sure the fish is fresh, so here is what you need to do.

The yellowfin surgeonfish lives close to the coast in shallow water, hiding near the rocks and coral.  This fish has blues, grays, and yellow colors, and it is very flat.  They mainly eat algae.

They like to congregate in schools of up to 20 individuals in a chum line, slowly moving toward the surface.  A chum line is when fishermen throw fish pieces into the water to attract larger fish. Very small hooks.

Fishermen try hard to outwit the surgeonfish because they are picky eaters.  Once the fisherman hooks one, the fight begins. They move about in every direction, trying to get unhooked.

They change colors from a beautiful blue to an ugly grey, trying to ward off their pursuers.

They are considered good to eat, however, there is a concern that they may contain Cigua toxin, which is present in surgeonfish outside the Eastern Pacific.

The tour guide suggested that we bake the filets in the oven at around 400 degrees for about 20 minutes.  The time all depends on the size of the filets.  So, here is our recipe …

Next post: How To Do Nerve Flossing – Basic Techniques