Cannes – Way Down In The South Of France 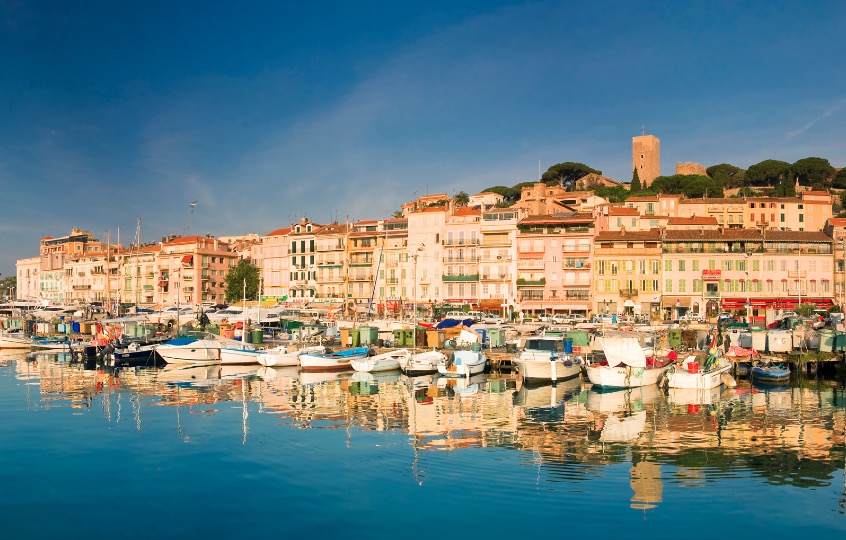 Many people think of Cannes strictly in terms of its renowned film festival, paying little mind to the fact that this small city is located smack dab in the heart of the French Riviera.

This is no place for budget beach-goers. The money is practically dripping from the chains of these regal Riviera revellers.

High fashion and sports cars spangle every corner of town. The Grand Prix takes place in nearby Monaco every year after the film fest.

With the esteem of these high-profile events and so much picturesque scenery, strolling about Cannes creates the feeling of practically being in a film. Go figure 🙂

Getting to the beach is simple from downtown Cannes.

It’s easy enough to get swept up in shops and cafés, as the architecture of the city center is quite beautiful.

Docked yachts abut designer shops near the water’s edge, nearly begging you to trade the heels and loafers in for a good pair of sandals.

And you’ll be glad you made your way to the beach when you do. It’s the South of France after all. You are here for the beach, right?

A virtual tour of Cannes beaches:

Here are a few of the best beaches, and beach areas you can reach by foot, and by boat:

Beaches in La Croisette, like most of the 5 beach regions in Cannes, are a mix of public and private.

This is an expensive area, with lots of restaurants, plenty of private beaches, and a few small public spots to lay out your towel.

Take a peek at the scenery here:

The Midi Beach area on the eastern end is a bit more affordable than some of the ritzy areas.

These beaches are favorites of the locals, if you’re looking to get away from some of the high-rollers.

Gazagnaire Beach and Mouré Rouge are a pair of narrow public beaches located in a mostly residential area.

These are also great for getting a taste of the local crowd– always a highly recommended move when traveling, at least for one afternoon.

Port Canto offers a range of small private beaches, and even a non-smoking beach, Bijou Plague, the only smoke-free beach around.

Canto tends to be more affordable than La Croissette, with Zamenhoff offering the lowest-priced chair and umbrella rentals you’re likely to find anywhere in Cannes.

The climate is exceptional in the South of France, with summer temperatures often hitting the mid 80’s during the day, and averaging about 77 degrees.

12-hour days of sun make for perfectly drawn-out European style lounging. Hey, even the sun is sophisticated around here.

Sainte-Marguerite Island is a perfect low-key day-trip from Cannes.

It’s just a short boat ride from downtown, a half mile to be precise, and the island offers beautiful walking trails, historical landmarks, migratory birds, and many small beachfronts.

You’ll be able to carve out your own personal spot to sun, or gather with the masses on one of the larger beaches.

The island is noticeably more tranquil and spacious than the many crowded public beaches of Cannes.

Sainte-Marguerite is a highly-recommended mid-trip breather.

The general city glamour and accompanying pretentiousness can be overwhelming for first-timers, honeymooners, and well, anyone, especially if you go into the journey with ideas of solitude in mind.

Sainte-Marguerite’s close proximity to the city offers for spectacular views of Cannes, and just the right amount of nature to cleanse your palate for more swanky wining and dining back in the city walls.

Catch another glimpse of the Island here:

Sainte-Marguerite also has some fascinating history.

Fort Royal, the island’s old prison, once housed the fabled Man in the Iron Mask. It wouldn’t be so shocking to see Leo hanging around these parts:

For those wishing to check another locale off the list, the immensely upscale city-state of Monaco, technically its own country, is just a short drive from Cannes and Nice.

Larvatto Beach is one of Monaco’s most popular beaches.  Luxury reigns supreme, and champagne takes place of margaritas here.

Several 007 movies were filmed in Monaco’s Monte-Carlo Casino, a must-see for those looking to test fate, or the clarity of their phone cameras.

You won’t regret a moment, nor a dollar, spent in this holy grail of European holiday locales.

Next post: Snorkelers Paradise – 5 Of The Best Beaches In Papua New Guinea