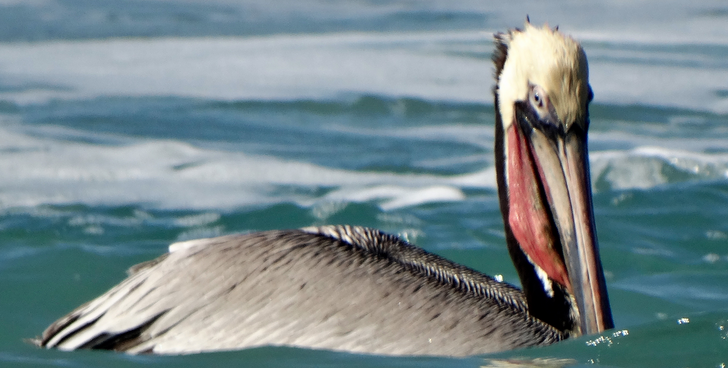 Brown pelicans are sea birds that are famous for their distinct appearance, and their amazing plunge diving skills.

This smaller member of the Pelican family can be found on the east coast of the Americas, from Nova Scotia to the mouth of the Amazon River, and on the west coast, from British Columbia down to the Galapagos Islands.

They are fun to watch especially as they glide in small groups, usually single file or in a v-formation, just skimming the water’s surface searching for fish or even a crustacean.

You might really enjoy how they dive bomb the water, submerging briefly under the water and surfacing with a fish in their pouch.

Here’s a quick video of them doing their famous dive bomb.

Our today’s post is all about these magnificent birds. So, stay with us to find out more. Here is what we are going to cover today:

Without further ado, let’s get to it!

Governments such as the USA have classified them as endangered, after their decline when DDT pesticide was still legal.

The residue from that chemical poisoned the fish, and the pelican in turn suffered, since their diet consists mainly of fish.

Fishermen love and hate the pelican, because they can consume potential fish that would benefit the fishermen, but they also eat diseased fish, so they act as a clean up crew.

The brown pelican is the state bird of Louisiana.  It is also the national bird of Saint Kitts.

Next, we discuss its characteristics in more details. The brown pelican is a huge, stocky seabird. They are generally about four feet in length. They can be easily recognized for their thin necks and very long bills with a stretchy throat pouch which they use for capturing fish. Their pouches are so big that they can hold two or three times more than their stomachs can hold.

The brown pelican a brown and gray body and a white head with a light brown crown. Their necks turn into dark brown during breeding seasons. Young pelicans are completely brown.

The brown pelicans generally nest on small, isolated coastal islands. These islands help them stay safe from predators such as raccoons and coyotes. They can also be found around waterfronts and marinas.

After their breeding seasons, the flock move north along both Atlantic and Pacific Coasts. They return southward to warmer waters and milder climate by winter. Some flock sometimes wander inland in summer, especially in southwest.

Next, we talk about food… The brown pelican is a piscivore, primarily feeding on different types of fish.

These birds are plunge divers. They drop from the air with their wings folded and dive into the water to capture their prey. When foraging, they dive bill-first like kingfishers. They generally submerge completely below the surface of the water momentarily as their snap up their preys.

They hit the water with such force that even fish five or six feet below the surface are stunned. Air sacs throughout the pelican’s body help to cushion the shock from the dive.

They use their bills and pouches like a big net. Once they surface, they spill excess water from their throat pouch and then swallow their catch. They don’t carry their prey in the pouches; they only use their pouches to scoop up fish.

Their pouch, which is the largest pouch of any bird in the world, can hold up to three gallons of water and fish.

Moving on to social behavior… The brown pelicans live in flocks made up of both males and females. When flying, they generally glide in a V formation or in a straight-line formation with their necks folded against their shoulders.

When not foraging, pelicans stand around fishing docks, jetties, and beaches or cruise the shoreline.

The brown pelicans generally breed in nesting colonies on islands without mammalian predators or permanent human habitation. They can build nests on the ground, inaccessible slopes, canyons or in shrubs and trees.

The brown pelican’s breeding season is not exclusively during late spring or summer. The time of year that a brown pelican breeds depends on where it lives or, more importantly, on its latitude, which is the distance of a location from the Earth’s equator.

Their normal clutch size is three or four eggs. The peak of egg laying is usually March or April; however, eggs are sometimes laid throughout June.

The female lays a clutch of up to four eggs in the nest. After the eggs are laid, both parents take turns sitting on the eggs to incubate them. The chicks hatch without feathers and are literally helpless without their parents’ care. For the first month one parent stays with the young at all times.

The parents also take turns feeding their chicks, initially by regurgitating small and well-digested fish into the nest for the chicks to eat. As the young grow, they start to feed on whole fish by reaching their heads into their parents’ pouches.

The length of time the young pelicans stay in their nest varies with latitude, but generally they leave the nest within 3 months.

Finally, we discuss their population status and conservation.

The brown pelicans were listed as endangered in the 1970s and 1980s because of different pesticides that entered their food chain. However, their population has recovered in the last three decades and they are not endangered anymore.

However, despite the recovery of the species, humans are still affecting their population in a number of ways. The major threat the pelicans currently face is pollution. Oil spills from offshore drilling operations often cause pelicans’ feathers to absorb water, which can eventually lead to drowning or hypothermia.

It is estimated that almost 85.000 brown pelicans were killed in the 2010 Deepwater Horizon oil spill. This catastrophe killed one out of every ten brown pelicans in the Gulf of Mexico.