Best Places To Visit In Macedonia 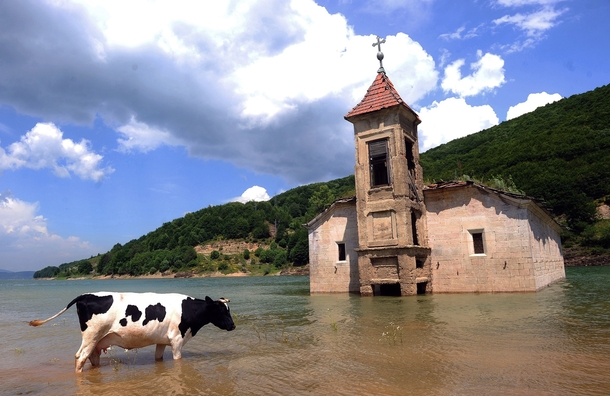 The Republic of Macedonia is a small European country located on the Balkan peninsula.  It is rich in Roman, Greek, and Ottoman history which makes its past quite fascinating.  If we go even further back into the past, Macedonia was the biggest kingdom in the world, thanks to its conqueror, Alexander the Great.

The locals here in Macedonia are unfailingly helpful, and are very hospitable people.  The capital city of Skopje is a combination of buzzing modernity and ancient history, so you will never be bored.  Here is a short video showing you around Skopje.  As you can see, there are many beautiful things to see in Skopje, both natural and manmade.

Ohrid, on the other hand, is another big city and perhaps the most dazzling in Macedonia.  The crystal clear lake Ohrid located in this city has over 200 endemic plant and animal species, and it’s declared a World Heritage Site by UNESCO.

The rest of this part-Balkan, part-Mediterranean place is a stomping ground for adventures. Its dramatic mountain ranges, UNESKO World Heritage national parks like Galicica, Mavrovo, and Pelister, blissfully quiet walking trails, excellent food, and cultural tourism initiatives make Macedonia one of the best places to wander around, if you’re the wandering type.

You’ll find a wide variety of ethnicities and cultures, beautiful countryside and modern cities – something for everyone.

Here are the best places to visit in Macedonia if you want to get off the beaten track in Europe:

Canyon Matka is located just 17 km southwest of the capital city of Macedonia, Skopje.  Visiting this beautiful place would definitely bring you closer to mother nature.  There’s the Matka Lake that boasts calm water and lush scenery, making it a very popular, one-of-a-kind kayaking place.  The steep walls of a craggy gorge together, with the glass-like turquoise water of the lake, make the place truly dazzling.

The canyon includes ten natural caves, one of which is Europe’s deepest underwater cave called Vrelo.  You can see these caves by renting a boat, and enjoying the beautiful scenery everywhere around you.  Or, you can explore them by foot or climbing.  Along with the clear turquoise water, you might see some of the rare butterfly species found here, which number more than 70.

At the end of your day trip from Skopje, enjoy a traditional Macedonian dish and a nice Turkish coffee at the Canyon Matka Hotel and Restaurant.  One more thing.  You can find 3 churches here, all of which have beautiful frescos.  They are the Matka Monastery, The Monastery of St. Nicholas Shishovski, and the Monastery of St. Andrew.  Some of them were build back in the 14th century.

The capital city of Macedonia is one of the most eclectic ones in Europe.  It’s a blend of the past and present, of the old and new, of the ancient and modern.  There’s literally a bridge called Stone Bridge (Kamen Most) that connects modern Skopje Central Square with the old, Ottoman part of town.

In the old district you’ll find the famous, and second largest bazaar in the Balkans called Old Bazaar, which will surely take you back in time.  Although the Ottoman architecture is predominant here, you’ll also find remains from the Byzantine period.  Evidence shows the bazaar dates back to the 12th century.

Walking down the narrow streets will lead you to a few mosques, two churches, turbes, Bezisten, three caravanserais, and a clocktower, but also to many unique bars and restaurants, which offer traditional Turkish meals and drinks, such as black tea.

In other words, this bazaar tells a lot of stories from each period of history of this region.  The coppersmiths, shoemakers, and goldsmiths keep the age-old traditions in their old craftsmen shops found here.  The Old Bazaar is a national, cultural heritage site ever since 2008.

This is the modern part of the town that has a lot of monuments, fountains, museums, and bridges mostly in baroque, gothic, and modern style.

In 2010, the Government began the project “Skopje 2014” which foresaw most of these buildings.  There are many things to see here… the giant statue of Alexander the Great located at the very center of the Square, the Porta Macedonia, the Kale Fortress, St. Spas Church, Stone Bridge, and the Mother Teresa Memorial House.  And, if you’re looking for shopping and nightlife, go to Macedonia Street, and you’ll find everything you need.

This is the biggest national park in Macedonia, covering over 730 square kilometres of gorges, forest, karst fields, and waterfalls.  You’ll also see Mount Korab here, which is the highest peak in Macedonia with its 2764 m height.

It is also the country’s biggest skiing resort, ideal between November and April.  On the other hand, during summer, there’s the Mavrovo Lake which is actually the biggest artificial lake in the country.  Besides being an excellent boating, fishing (especially trout), and swimming spot, you might want to see the half-submerged St. Nicholas church in the middle of Mavrovo Lake.

Thanks to its vivid topography, the beautiful Radica gorge, the highest waterfall in the Balkans, the spectacular landscapes, blue lakes, snowy peaks, deep canyons, and diverse wildlife, the National Park Mavrovo is one of the places you must visit in Macedonia.  There are many hotels along the lakeshore you can stay in until you explore the entire national park.  But, there’s always the option of enjoying the tranquility of the lake, forests, and mountains by bringing a tent.

Thanks to its cultural significance, the town Ohrid has been recognized as a World Heritage Site by UNESCO.  This large town had started construction in the 7th century, which makes it one of the oldest human settlements in Europe.  There’s the 2-3-million-year old Lake Ohrid, which is home to more than 200 unique species of animals and plants, including 17 endemic species of fish, turbellarian flatworms, algae, crustaceans, snails, and even rich birdlife.

The water is crystal clear, and there are many attractive beaches which are quite popular during summer.  There are peaceful ones you can enjoy, and other noisy ones with some of the world’s most famous DJs.

Furthermore, here’s the oldest Slav monastery, with 800 icons in Byzantine style which originated from the 11th– 14th century, and 7 basilicas dating from the 4th, 5th, and 6th centuries.  There are numerous churches and monasteries, one of the most famous being St. Naum, located on a rocky cliff.

Ohrid has a unique, old architecture which makes it so interesting and visually impressive.  It is home to many cultures, dance, music, and theatre events, especially during summer.  Another great place to visit here, is the old Samuel’s Fortress.

Stobi is an ancient city, and the most important archeological site in the country.  It was built in the 7th century. Archeologists even discovered a theatre built in the 3rd century, and many other public and private buildings.  Some of them are the Northern Basilica, the Temple of Isis, Baptisterium, bazaar, public baths, and many beautiful mosaics.

The best part is that you can visit the site, and see all the remains and ruins from this important Roman/Byzantine city, and all for the price of 2 euros.  You can easily imagine how people used to live here, when you see parts of these old buildings while walking down the paths that used to be streets in this important trading hub.

Skopje is the hometown of one of the greatest humanitarians of all time – Mother Theresa, born as Aganesa Ganja Bayaju. Macedonians have found a decent way to celebrate her life and work by opening a memorial house in her name.  They have even chosen the perfect location for building this recent landmark of Skopje.  It is the very location of the church where she was baptized, Sacred Heart of Jesus Roman Catholic Church.

You will surely notice this unusual building with retro-futuristic architecture, when walking on the popular Macedonia Street that’s east from Skopje City Square.

The Bay of Bones is one-of-a-kind Museum on Water in this region ever since 2008.  It is located on the southern coast of Lake Ohrid in the village Peshtani, Ohrid.  It’s actually a reconstruction of a prehistoric settlement dating from the Bronze and Iron ages.

The reconstruction was based on the remains of Plocha Michov Grad – a nearby underwater archeological site.  You can see museum houses built on a wooden platform, that are about 1.5m above the water level.  The interior of the houses depicts how people from 1200-700 B.C. used to live.

There are different tools, fragmented vessels and beds of animal skin, similar to the original ones found during the many underwater archaeological investigations.  Plus, the surrounding is breath-taking, so don’t miss it if you go to the town of Ohrid.

With its 39.5m height, Smolare waterfall is the highest one in Macedonia.  You’ll find it deep in the Belasica Mountains above the village of Smolare, located in the southeastern Macedonia.

To get to this waterfall, you’ll have to go through narrow man-made paths, 300 stone steps and wooden bridges in a forest with 100-year-old beech trees.  In fact, this is part of the whole beauty of Smolare waterfall.  Once you get there, you can enjoy the sight and refreshing spray of the water colliding with the rocks, and the river below, from a wooden bridge.

At the base of the path, you can also enjoy camping and picnic areas, as well as the local marketplace, which offers fresh, organic veggies, fruits, and honey.

The oldest and second largest city in the Republic of Macedonia offers so many different things to see and do.  It is a blend of old Ottoman and modern buildings.  First of all, you have to go to the Wide Street (Shirok Sokak Street) to enjoy a cup of coffee, in one of the many cafes at this pedestrian boulevard.

Girls from this town are known to be the prettiest, who dress up in their best clothes, and parade up and down the street. So, you’ll surely have a good sight while drinking your coffee.  Other places to go are the old Turkish bazaar, which used to have 900 shops offering wool, leather, soap, gunpowder, silk, and what not.  Now, you can find clothes, blankets, rugs, housewares, souvenirs, etc.  Also, you can visit the archeological site Heracles Lyncestis, which was founded by the father of Alexander the Great, Philip II in the 4th century BC.

The ruins are located at the base of Baba Mountain, about 2km south from the center of the city.  The north side of the same mountain hides one of the most beautiful national parks in Macedonia – Pelister, which has 29% of the entire flora and fauna in Macedonia.  One thing Pelister is known for, is the 200-year-old Molika trees which can reach up to 131 feet (40m). Other things it offers are great hiking paths, picnicking spots, horseback riding, skiing, and rock climbing.  You can stay the night at some of the hotels within the park.