The Best, Nicest, and Most Beautiful Beaches In Costa Rica 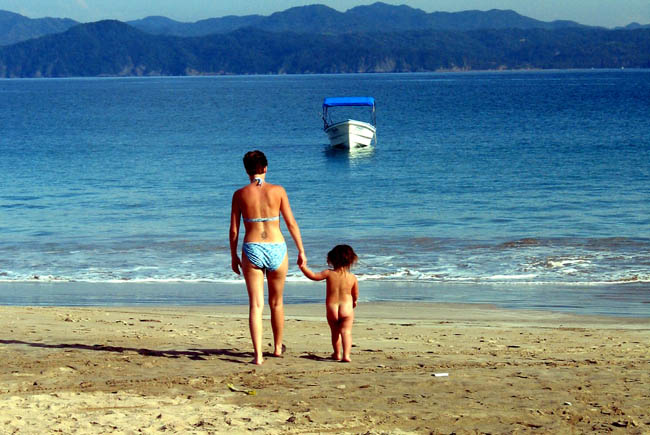 Home to some of the most lush and colourful jungles in the world, Costa Rica is perhaps most famously known for its pristine beaches located on both coastlines.

Straddling both the Pacific Ocean and the Caribbean Sea, the beaches along both coastlines vary dramatically.

Depending on the vibe you are searching for, it can be a good decision to choose which coast suits your needs.

The Pacific Coast tends to be busier and more touristic, but better for surfing and scuba diving, while the Caribbean Coast has it’s own fascinating sub-culture with more rugged and untamed beaches and shorelines.

The Best and Nicest Beaches In Costa Rica – My Humble Opinion

Located on the mid-south Pacific Coast, Manuel Antonio beach is one of the most popular beach destinations in Costa Rica.

With clear waters and a pristine sandy beach, it is no wonder that both tourists and locals alike flock to this beach year round.

Manuel Antonio beach is also conveniently located adjacent to the stunning Manuel Antonio National Park. Filled with monkeys, sloths, birds, other wildlife, and spectacular trees and thick jungle, the park is a great place to explore when you’re not spending time tanning or swimming at the beach.

Off of the coast of Manuel Antonio Beach, there are plenty of incredible snorkelling and scuba diving spots. Manuel Antonio is located about three hours from San Jose.

Tamarindo is one of the most popular surf beaches in Costa Rica. Located on the northern Pacific coast, Tamarindo mainly caters to tourists.

It is often referred to by locals as “Tamagringo” because so many tourists frequent the spot. This also means that prices for hotels, accommodations, and food are more expensive.

The waves in Tamarindo are consistent and mid-sized, which makes it the perfect surf spot for beginners and professionals alike.

The nearby town of Tamarindo has some great restaurants and there are other beaches nearby, giving you the chance to explore less crowded but nearby areas.

Tamarindo is around six hours from San Jose.

Often referred to as the “hippie town”, Santa Teresa is located on the Pacific Coast of Costa Rica on the Nicoya Peninsula.

Easily reached from San Jose by taking a long bus ride or taking a short bus ride, a boat across the peninsula, and another short bus, Santa Teresa is much quieter than many other beaches in Costa Rica.

The town itself is a sleepy surf town, where locals, tourists, and expats live in surfers paradise.

By far one of the most pristine sandy beaches with crystal clear waters, Playa Conchal is a spectacular beach to visit in Costa Rica.

Located in the northern Guanacaste Province, around six hours from San Jose, Playa Conchal offers snorkelers and swimmers the chance to explore coral reefs, tons of fish and sea life, and many other underwater discoveries.

While this area is surrounded by all-inclusive and rather pricy resorts, Playa Conchal is well worth the extra expense. The beach and sea here is exceptionally clean and very picturesque.

The Best of the Caribbean Coast

Located on the southern Caribbean coast next to one another, Playa Chiquita and Punta Uva are within walking distance of each other.

Unlike the tamed beaches of the Pacific Coast, the beaches on the Caribbean coast are a lot more wild and untamed.

More palm trees are strewn across the beaches as well as the sand existing in different, and often darker, shades.

The beaches here offer many different water sports including jet skiing, snorkelling, scuba diving, and nearby jungle adventures and walks.

Located further south from Punta Uva, Manzanillo Beach is one of the last beaches located along the southern Caribbean coast of Costa Rica, right before the border of Panama.

Manzanillo Beach is incredibly quiet compared to any other beach in Costa Rica.

This is due to the fact that it is technically located in a remote location. It is only possible to reach the beach by driving for a couple of hours south in land, since the Manzanillo Refuge and jungle sits in between Punta Uva and the southern beach.

It should be noted that the beach here is volcanic black sand, however the corals and reefs here are absolutely incredible.

Furthermore, giant leatherback turtles nest their eggs in the right season on this beach, which means you can take a late night adventure onto the beach to check them out.

While the beach is not exceptional in the little town of Puerto Viejo, it is worth mentioning due to its liveliness and closeness in proximity to the quaint and exciting town of the same name.

Puerto Viejo is frequented by many locals and has a completely different vibe from any beaches located on the Pacific Coast of Costa Rica.

There are many beach huts serving up local Caribbean cuisine and selling local goods.

The beach also connects to many other beautiful beaches in this area including Playa Chiquita and Punta Uva.