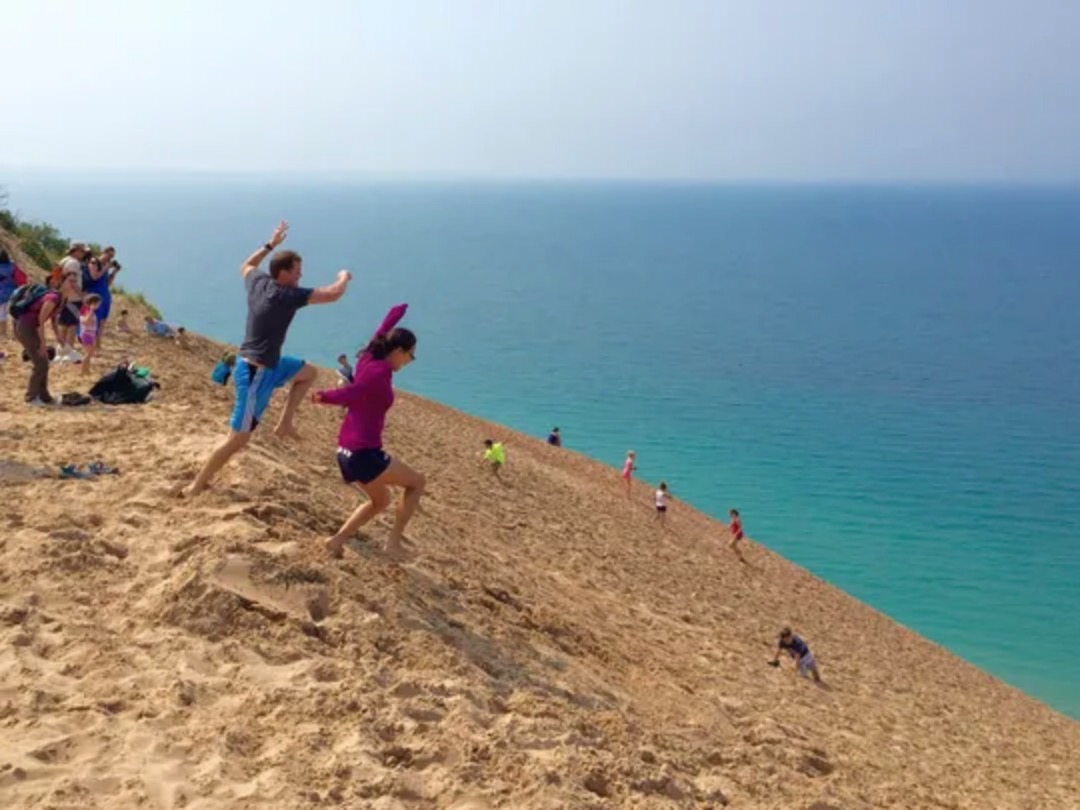 Summer vacation planning is a headache for parents, but if you’re in the Midwest and looking for a great beach getaway close to home, here are some ideas to cut down on the pain.

We’ve done some of the research for you and found these Great Lakes beaches. Any of them will make a worthwhile stop on a family vacation, and some are destinations all their own.

Sleeping Bear Dunes National Lakeshore makes an appearance on every list of best Great Lakes beaches you’ll find, and there’s a good reason for that.

Extensive beaches, some crowded, some completely empty, make up the park’s northern edge along the shores of Lake Michigan, and are some of the cleanest beaches you’ll find anywhere.

Located a little west of Traverse City, the park is known for its giant sand dunes and immaculate beaches.

There’s lots for families to see in the area, too, from historic shipwrecks and museums to shopping and restaurants.

Here is a great video of Sleeping Bear Dunes MI, by TAPP Channel.

Grand Haven State Park in Grand Haven, Michigan offers up a quintessential Great Lakes beach experience, with clear water, golden sand, dunes with views for days, and even beach camping if your family is adventurous.

Grand Haven is also accessible from some major Midwest cities, closest to Grand Rapids and Lansing, but an easy drive from southern Michigan or northern Indiana, too.

The state park is a walkable distance from downtown Grand Haven, and is graced by a historic lighthouse and boardwalk for some old-time beach-going nostalgia.

Watch this video of a human chain wading into Lake Michigan, by the Grand Haven Tribune.

But one of the best places to take kids that’s surprisingly uncrowded and relaxing is Tiscornia Park Beach, in St. Joseph, Michigan.

The St. Joseph lighthouse provides a scenic backdrop, and a children’s museum is close by for more family entertainment.

The northernmost Great Lake has its own jewel of a beach that’s been recognized time after time for its beauty, safety and ease of use.

Clean water? Check. Amazing views? Check. Nearby amenities and easy access? Check. It’s even usually not very crowded — and if for some reason it is, the national lakeshore can boast of several other sandy beaches to visit.

Plus, if your kids love the outdoors, the surrounding park also has hiking, camping, clifftop vistas and a junior ranger program that’ll keep them busy.

A little closer to civilization, another Lake Superior beach is a local favorite. McCarty’s Cove in Marquette, Michigan is a long stretch of white sand with a historic lighthouse overlooking the beach.

Playgrounds at either end help kids burn off energy, and lifeguards patrol in the summer.

It’s within walking distance of downtown restaurants, hotels and shopping, and a children’s museum can also be found downtown.

And at the other end of the lake, in Duluth, Minnesota, Park Point brings in the crowds each summer.

Also called Minnesota Point, the beach is right at the end of Duluth’s Minnesota Avenue, and offers swimming, a playground, pavilions and grills.

Sand volleyball courts are marked out for public use, and other athletic fields are nearby.

The beach is lifeguarded in the summer, and the Beach House overlooking the park offers concessions, as well as being home to many events.

Here’s a video of Park Point during the off-season, featuring some of the more wild and wooly winter conditions.  Cool video, though!

There’s a reason the eastern shore of Michigan is called the Blue Water area, and it’s Lake Huron.

White sand and sunrises make for some truly astonishing scenic views, but if you’re not getting up that early, the beaches will still welcome you when you do.

Mackinac Island has to be mentioned for its white-pebbled beaches, which are small but numerous all around the coast of this island in the Straits of Mackinac.

Visiting Mackinac Island is not cheap, but it is an experience unlike any other. Families crowd the streets each summer to take in the old-fashioned atmosphere of ice cream, fudge, and horse-drawn carriages.

Since no motorized vehicles are allowed on the island, you’ll have to walk or bike to your beach of choice, but the scenery is worth it.

Check out this awesome video showing off Mackinac Island, by Michal Kedzierski.

It’s sometimes called the “Cape Cod of the Midwest” thanks to its location, a long sandy spit curling around the shallow, warm Tawas Bay.

Wide sandy beaches and safe swimming areas make this a great place for children to swim, and nearby amenities include a campground, picnic areas, a playground, and concessions.

Here is some raw beach footage of Tawas Point Beach, by Allison Albert.

Down in Port Huron, a quick drive from Detroit, the best beach to be found is Lakeside Park, a waterfront park in the city of Port Huron.

The white-sand beach stretches more than 1,000 feet and is dotted with features like BBQ grills, picnic tables, concessions and even a zero-depth splash pad for the littlest beachgoers to enjoy playing in the water.

If you’re not a city resident, there’s an entry fee, but that doesn’t appear to stop visitors from flocking to this popular site in droves on summer weekends.

Here is a lovely view of this beach, video by Harris Tucker.

Lake Erie can sometimes get a bad rap from folks who remember its days of problems with industrial pollution.

But, those problems have been reversed over the last few decades, and today’s Lake Erie beaches are clean, numerous, and often uncrowded.

The main swimming beach here is shallow, warm and kid-friendly, with calm waters and a gently sloping beach area.

And if you’re looking for a beach spot where your dog can join you, East Harbor’s South Beach is open to four-legged friends.

A five-star waterfront playground and 20 acres of park complement the kid-friendly beach, which also sports beach volleyball courts and the Lorain Lighthouse.

If the sand tires you out, there’s also lawn bowling, or a visit to the historical rose garden in Lakeview Park.

Here’s a nice slide show showing off some of the prettiest parts of Lakeview Park, including the rose garden and the beach, thanks to Hisey Group Howard Hanna.

While most of Lake Erie’s southern shores are in Ohio, there’s a beautiful stretch of lakeshore in Pennsylvania too, and it’s home to Presque Isle State Park and its many beaches.

This is one of those beaches that’s always getting recognized for its beauty and recreational choices.

Located just outside the city of Erie, Pennsylvania, Presque Isle State Park is on a large, sandy peninsula arching out into Lake Erie.

That means it’s packed full of popular beaches — more than a dozen, in fact. Swimming, boating, fishing and trail sports take place all around the park, which wraps around Presque Isle Bay.

A few beaches are even open to intrepid Great Lakes surfers.

Of the park’s beaches, a few are best suited for families. Beach #11 (catchy name, right?) is a paradise for young children as the most sheltered beach in the park.

It has shallow, warm water and a large sand beach, plus a beach house with changing areas and concessions. Nearby, there are picnic areas, a pavilion and a playground.

Others with beach houses and concessions are Budny Beach, Pettinato Beach and the ADA-accessible Waterworks Beach, which offers ramp access down to the water’s edge, and also hosts picnic areas, a playground and a pavilion.

Here’s a great view of the beach on a windy day by Michael A. Orlando.

Would-be vacationers in New York state and Ontario don’t have to head to the Atlantic coast to enjoy beach resorts and sweeping views of the water.

While Lake Ontario is the smallest of the Great Lakes, “small” still isn’t a word you’d use for it.

Miles of coastline is spotted with state parks and nature preserves that offer up sandy beaches and recreational fun like kayaking and swimming.

Wilson-Tuscarora State Park in New York hosts thousands of visitors each summer to its sand and pebble beaches on the shores of Lake Ontario.

It’s especially popular because it’s just a few miles northeast of Niagara Falls. You can take the family on a day trip to see the national landmark falls, and then relax on a sunny beach away from the crowds afterward.

There’s a lifeguarded beach, playground, outdoor and indoor pavilions, and even a disc golf course. Bring a picnic and use their tables and grills for a perfect family summer afternoon.

A campground-style park, its main attraction is a lovely sandy stretch of beach, lifeguarded in the summer, complete with showers, picnic areas, pavilions, and even a convenience store for beachside snacks and drinks.

You can also explore the beach attractions of yesteryear along Lake Ontario; the lakeshore was a popular Depression-era vacation spot, with plenty of hotels, restaurants and amusement parks near cities like Rochester and Niagara Falls.

Olcott Beach in Olcott, New York is one such place, with the picturesque remnants of an old hotel and a nearby kiddie-style amusement park that’s recently re-opened.

Ontario Beach near Rochester is another, with an old pier and carousel still drawing visitors more than a hundred years after they were built.

Signing Off For Now

Thanks for checking out some of the best Great Lakes beaches with us!  If you have some that you feel should absolutely be on here, leave us a comment and let us know!

Previous post: We Review The Best Pool Floats of All Time!