The Beaches Of Southern Turkey – My Trip To Anamur 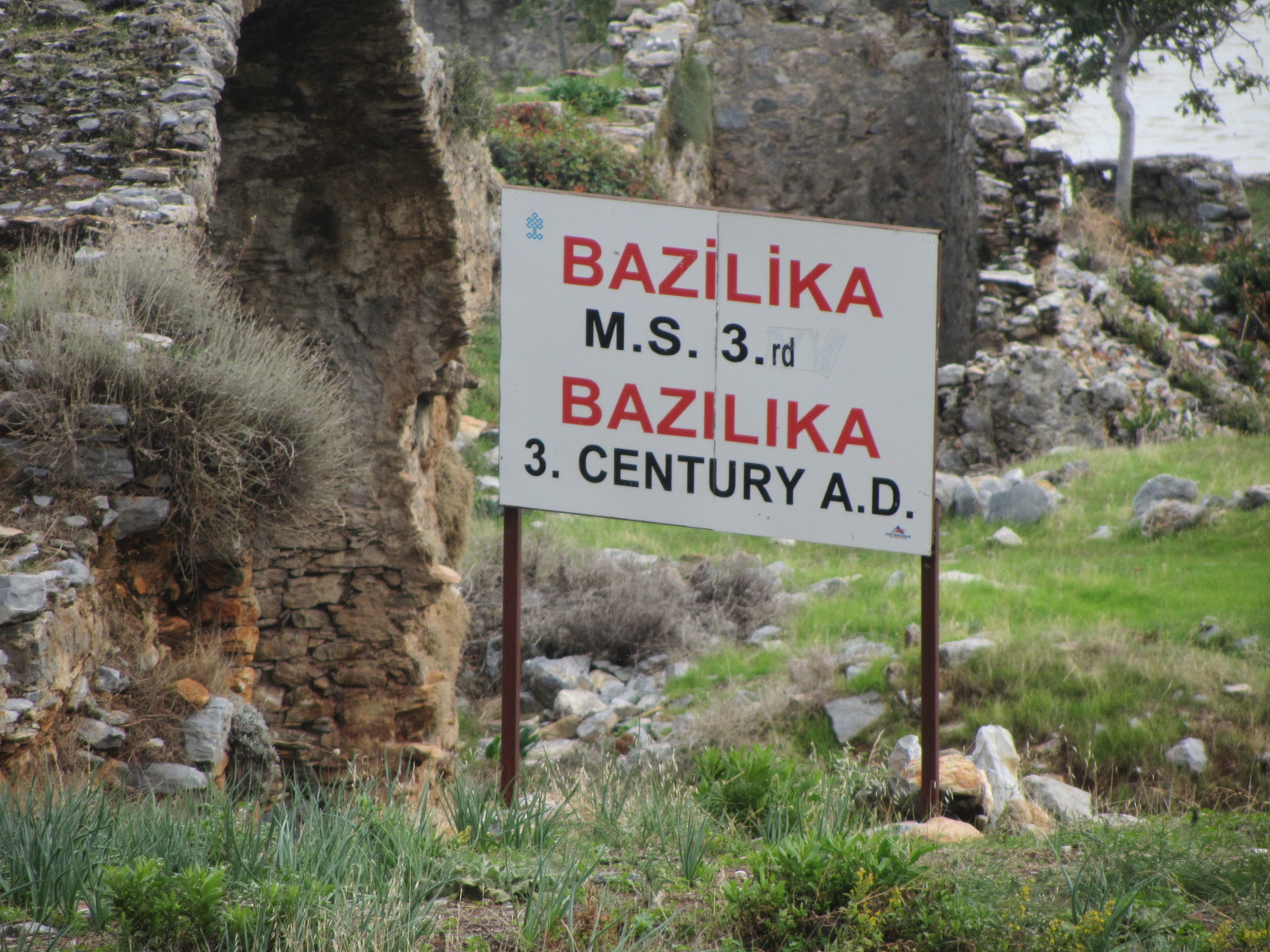 It’s been a while now since I paid my first visit to Turkey, back in November of 2012, at the tender age of 35, but I still have plenty of memories of this amazing country. I was there for about 3 weeks, and I was visiting my new girlfriend, whom I met, of all places, on Facebook. It’s amazing how two people can meet in this day and age, and we hit it off immediately.

Within maybe 4 months, I had bought a plane ticket to Turkey to go meet her in person for the first time, and spend some time sight-seeing. Actually, I didn’t care much about the sights. I went specifically to meet this girl.

Ok, so obviously Turkey has many worthwhile beaches on the southern coastline, which is very long, and stretches from Bodrum in the southwest, over to Iskenderun in the east. This isn’t officially what constitutes the southern Turkish coast, but I am gazing upon a map right now, and so that looks to be the extent of the southern coast to me.

To be honest, I don’t think checking out any beaches was even part of my travel plans when I visited Turkey. I trusted my girlfriend to take me around and show me the sights.

I think I was already in Turkey, and we were hanging out in Istanbul, when we discussed possibly taking the trip down to her parent’s summer home in Anamur, which would require a 10 hour bus ride from where her parents live, in Ankara.

Being a fairly agreeable chap, I was down for anything, and really had no reason to say no to whatever she thought we should do.

I was told that Anamur was a lovely and historic place, but talk of the 10 hour bus ride was slightly daunting. 10 hours? I guess I hadn’t really looked too closely at the map, but Turkey is friggin’ huge!

I think I had been in Turkey for maybe a week or so, when we headed south from Ankara to Anamur, via some bus line that I can’t recall, but it was one of the main ones. As I look through my old photos of the trip, I’m a bit surprised as to how few I have of our trip to Anamur.

I guess this is because I don’t take my phone everywhere with me, and although I had a camera, I wasn’t snapping pictures the whole time. I was actually just spending time with the people I was with, and relying on my brain to store the info.

It was 2012, and I would say at this time it was still pre-everyone using their phone 100% of the time. I probably should have taken more pictures though, because my brain isn’t always prepared to dredge up the memories, especially since we eventually did break up. 🙁

So, about that bus ride to Anamur from Ankara. It was really, really, REALLY long. I do want to talk about Anamur, so I’ll really try to condense it. Basically, you go due south for 10 hours and travel through many, many mountains.

You go up, up, up. Then, down, down, down. Lots of hairpins where the bus would slow right down, go around a tight bend, and then get back up to speed. I must admit, I was slightly terrified. Like a jerk, I’d try to wake her up to ask her something, but for her, bus rides just put her to sleep.

For me, it’s the opposite. The bus ride was mostly through the night, and I was just watching the bus driver rip through the mountains. He obviously had done this several times, and knew the whole route.

One highlight of that bus ride was going through some mountains, and coming across a service station that was lit by a moody blue light. It was like this port in the storm type of thing, as there wasn’t much going on in these mountains except the odd hovel.

Inside this strange mini mart, it was filled with so many treats, like chocolate and cream pie type stuff, and candy, just waiting for us to buy bags of it. It was amazing, and you had to pay to even go in there I think, and the guy was just sitting there watching us with his arms crossed.

I don’t think I bought anything, due to my gluten allergy, but I felt like that guy expected us all to buy 10 bags of custard pies each. We got gas or whatever, and off we went.

I think other people bought more junk food, so I didn’t feel so bad. The funny thing I have to say about Turkey, is that most of the people are pretty skinny, but there’s so much junk food everywhere.

I could blather on about that bus ride, but I’ll skip to the part where we were getting close to Anamur, which was at like 5am. We’d left like 11 hours prior, and so we practically were living on that bus by then, with our “Nescafés” and our bags of chips, provided by the bus line.

So, the mountains go on forever, but you eventually can feel you’re coming down out of them, and the air changes. Also, the scenery changes with more big bushy trees, and you can just feel that you’re almost there.

Since I’d never been to Anamur, I really didn’t know what to picture, but I do remember the moment when we were zipping along some road, and suddenly I could smell the sea, and it was like, a really beautiful smell that I’d never before smelled.

It was so cool, and I think at that point my girlfriend was waking up a bit, and I tried to explain it to her, but she didn’t really get what I was trying to say.

We spent maybe 4 or 5 days in Anamur, just loafing around. Since I am such a weenie, I was still pretty much culture shocked and perma-jet lagged, so I was a bit lethargic, and sort of experiencing indigestion most of the time.

People fed me a lot, and I either wasn’t used to eating that much, or that type of food. In any case, I really didn’t care what we did or where we went. I just wanted to hang out and do whatever.

Anamur is a kind of military outpost town, and it’s where military personnel go to retire apparently.

Also, there is a base there, so one day we’re walking along and some guy in fatigues is coming the other way, with his machine gun, or was it a bayonet rifle? It was weird, since it’s kind of where some Turks go to vacation, there’s some locals, and then there’s these ‘teenage’ looking military guys, wandering around, guarding this base.

I asked my girlfriend about the base, and what they were guarding, and she wasn’t sure, but my guess was, nothing important. It was just a base, and there were no other real signs of military other than a few guys wandering around with guns, but that was just near the base. Everywhere else it was older folks, vacationers, and some kids who lived in the town, hanging out at the internet café.

I must say, Anamur was really beautiful. It was like being in a valley, I guess, because the mountains made the town feel like it was in a bowl.

The beach was indeed beautiful, and we spent some time there. I noticed that Turkey in general, had a lot of areas where you could go to the beach, where there were chairs or umbrellas already there, sort of waiting for tourists, or whoever might come.

There were also quite a few places which had outdoor patios, so you could just kind of sit down, and sooner or later you’d get served, and get breakfast on the beach or something.

If I recall, Anamur proper had a sandy beach, but if you went down the beach a ways, you’d reach the historic sites, and there was no sand over there. I think to get from Anamur to the ruins that we visited, it took us 15 or 20 minutes by taxi to get there.

These ruins were definitely worth checking out, because they were several thousand years old, and were still somewhat intact. I think I even spotted some white North Americans moseying around over there as well, which was slightly surprising since most everyone I saw in Turkey were Turks,or people from that part of the world, with that slighly darker complexion. Seeing white people almost made me want to talk to them, but then I realized I was too busy checking out the sights myself, and the ruins required you watch your step.

The view of the sea from the ruins was pretty cool, and I didn’t realize the scope of how far away things were. For instance, I seem to remember from this picture that we decided to walk over to the sea, and it took us half an hour.

These ruins of Anamurium are extensive, and if you aren’t careful, you’re liable to fall into a hole and break your leg. I just remembered now, that it was going to rain that day, so we didn’t want to be far from the entrance of the park, but when you decide to walk in some random direction, it doesn’t take long for you to get lost, even though you’re on sort of an open plain, and can theoretically see everything.

Anamur is an interesting place also because of the wildlife. The sea gulls (called “martı”) there look different with their white splotches, and they weren’t interested in eating my bagel, which I could not believe.

Also, you might even see a cat wandering around in the middle of nowhere, seeming rather out of place.

My girlfriend told me a story about how the mayor of one town hated the mayor of another town, and so they brought over all of these dogs in a truck, and let them loose in her little town, meaning that the town was now filled with wild dogs. Great. Anyway, if you do make it to Anamur, make sure you don’t miss out on Anamurium, because it is definitely a wonderful historic spot to visit by the sea.

To cap off this story, I’ll say once again that Anamur is a beautiful place, and I’m not just saying that because I was smitten by this chick at the time.

The city itself is historic, and the beach is beautiful, with very unique surroundings and lovely people. It is somewhat of a rural town, I would say, with lots of stands selling little bananas and veggies, so if you go there, hopefully you like bananas, because I might be wrong, but I thought she said it was the banana capital of Turkey (I’m probably wrong).

I think it’s fair to say that even though we broke up, I would still make the arduous trek to Anamur again one day, just to see the town once more, because there’s something really magical about that place.

Next post: The Best Snorkelling Spots In Southeast Asia